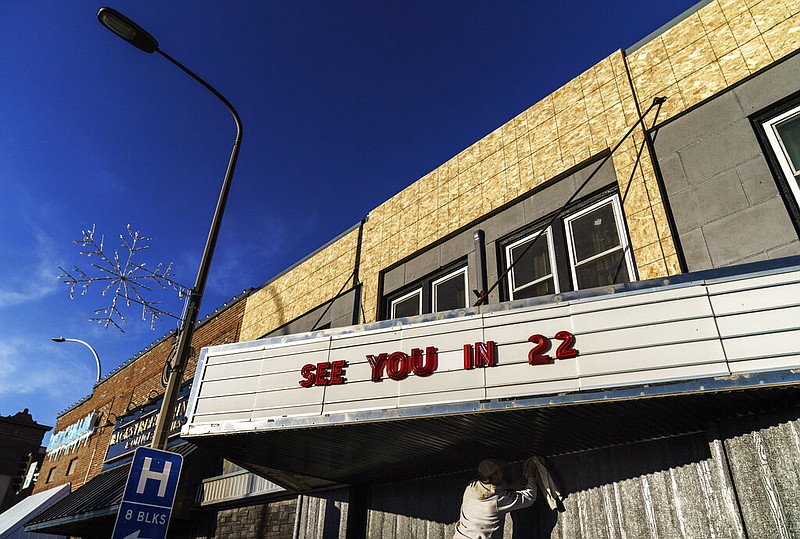 A worker polishes a marquee at a theater under renovation in Benson, Minn., in this Nov. 29, 2021 file photo. Benson, with a population just over 3,000, is among the rural communities that could benefit from the State Small Business Credit Initiative approved in 2021. (AP/David Goldman)

State officials are awaiting approval of $81.7 million in federal aid that would be funneled to small businesses in underserved rural areas of Arkansas. Funding could be available as soon as August.

Federal funding of $10 billion for the national State Small Business Credit Initiative was approved last year as part of President Biden's American Rescue Plan Act passed by Congress and would be delivered to Arkansas through the U.S. Treasury Department.

The Arkansas Development Finance Authority would administer any federal funding that is approved for the state, according to Chuck Cathey, vice president of development finance at the agency, which submitted the application.

"Right now, our application is under review with Treasury," Cathey said Thursday. "This is a funding source to run through the state's existing programs in Arkansas."

Treasury officials, in announcing the program, said the effort aims to "empower small businesses to access capital needed to invest in job-creating opportunities as the country emerges from the pandemic."

Funds are available as grants but require investments from lenders or private-equity investors. "It's a grant but it's unlike any other program that you have ever seen," Cathey said. "It requires a $10 match of private money for every $1 that goes out and the match cannot be tied to any other government program. That money has to come from banks or private equity."

The initiative is structured to promote public-private partnerships in needy communities where small businesses often struggle to secure funding, the Treasury Department said in launching the program. In addition, the federal program offers grants at lower interest rates than would be available on the open market.

Under the funding formula, Arkansas is eligible for $81.7 million. "That is all subject to change and we don't know what the final amount will be," Cathey said. "This is where we are now and what we've applied for."

The remaining 40% will be distributed to small businesses, including socially and economically disadvantaged companies, which are targeted to receive about $28 million in grants.