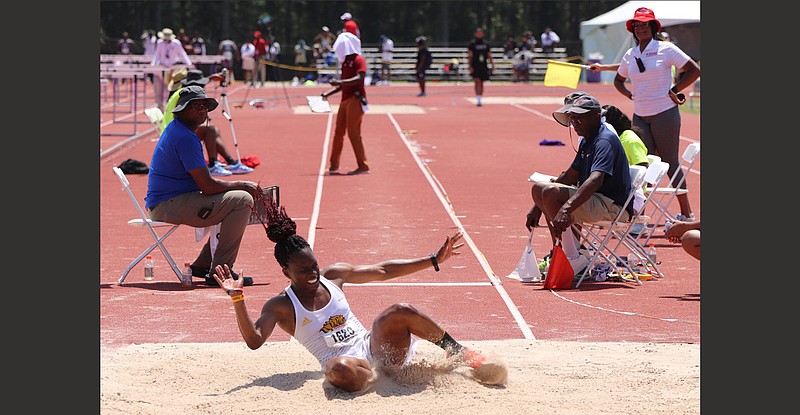 Safiya John lands into the long jump pit in a recent meet. (Special to The Commercial/University of Arkansas at Pine Bluff)

After having just competed at the NCAA Outdoor Track and Field Championships, the University of Arkansas at Pine Bluff's Safiya John is now being recognized as a second-team All-American but will compete elsewhere next season.

John already will be etched in the record books as the first athlete from a historically Black college/university to compete in the NCAA heptathlon finals in Eugene, Ore. But she also left the University of Oregon's Hayward Field with a personal best and a 10th-place national finish.

Now, John plans to utilize her extra year of collegiate eligibility while pursuing a master's degree in environmental science. The University of Arkansas, Oklahoma State University and University of Southern Mississippi are among the top destinations on her radar.

"This season is definitely one to remember because I was able to compete at the highest level and hold my own against some of the top athletes in the country," John said. "I have been competing with an injured elbow so the javelin throw may have been the biggest setback on me maintaining that seventh spot. But everything happens for a reason. I will be looking for a university that will take care of my educational needs first."

Athletes who finish in the top eight are named first-team All-Americans.

John scored 5,626 points after earning top-eight finishes in four of the seven events. She looked up at the board and saw herself in the top five after the first day of competition, and knew that both her parents were rooting her on watching the ESPN2 broadcast from her home country of Trinidad and Tobago.

Though their dream for her centers around her completing her education, John knew the sporting event also had added meaning to her family.

"It may have been hard for them to see every event on TV but I can say that they have always been proud of me," she said. "I think that it was something special to them because I am representing my country at the highest level. All of the hard work and practice has paid off, and I couldn't thank my coaches here enough for that."

John accumulated 5,602 points in winning the Southwestern Athletic Conference heptathlon last month, which were enough to automatically qualify her for the NCAA finals.

John had already accelerated her international profile as a teenager when she secured a silver medal in 2018 and a gold medal in 2019 at the Carifta Games.

The annual event was founded by the Caribbean Free Trade Association in 1972. They provide an international platform for athletes from abroad to compete in a sporting event that features competitions similar to the Olympics while representing their countries in front of potential college recruiters.

Ironically, with the next Olympiad only two years away, John has been mulling over the chance to represent her home country should things continue to trend her way.

"I feel like the opportunity will present itself, but it really isn't my main focus," John said. "I think I can compete on the world stage if training is going well and if I am healthy enough to do so. I am not sure how the Olympic (selection) process works but if they invited me to try out, it would certainly be an honor to represent my country."

According to John, her performance was lauded at the NCAA Championships by a few Division I coaches and hopes to follow any positive leads to a Division I university that would help her seek two of her ultimate goals -- a national championship and more importantly a master's degree.

"I want to continue competing so that the younger kids in our country can dream big and reach their goals," she said. "If I am able to inspire them to be their best, then that is a great thing and something I can always be proud of."