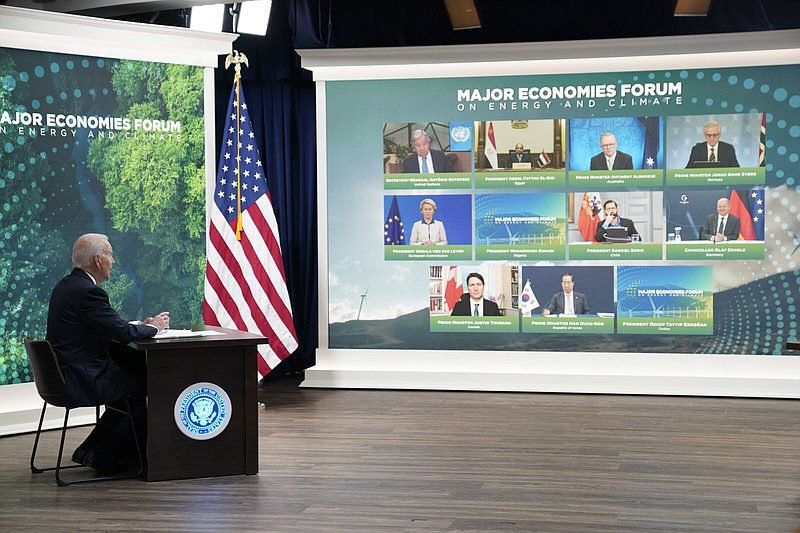 President Joe Biden speaks during the Major Economies Forum on Energy and Climate Friday in the South Court Auditorium in Washington. (AP/Evan Vucci)

WASHINGTON -- President Joe Biden returned Friday to a virtual summit with little to show in the way of new U.S. incentives for renewable energy, despite holding two hopeful meetings last year with leaders of the world's biggest emitters of greenhouse gases.

"We cannot, we cannot, afford to let the critical goal of limiting global warming to 1.5 degrees Celsius to slip out of our reach," Biden said at the Major Economies Forum on Energy and Climate. "The science tells us the window for action is rapidly narrowing."

Senior Biden administration officials said the president was "laser-focused on driving forward an agenda and actions" that would strengthen U.S. energy security and "bring together a broad coalition about taking action that meets the urgency of this moment."

But the $550 billion package of tax incentives and other measures in the Build Back Better proposal has stalled in Congress. The Russian invasion of Ukraine has added pressure to increase U.S. output of natural gas for export and boost global crude oil supplies.

Biden highlighted several areas for action, such as the construction of hydrogen hubs in the United States; a "green" shipping contest sponsored by Norway and the U.S. to decarbonize fuels by 2050; and a renewed call for world leaders to match the U.S. goal of zero emissions for 50% of new cars.

He said that if ocean shipping were a country, it would be the world's eighth-largest emitter of methane.

The president noted that in its infrastructure bill the U.S. would provide $21.5 billion of the $90 billion that the International Energy Agency said would be needed for hydrogen demonstration projects this decade. Hydrogen can be used as an energy storage device.

Biden called on countries to clamp down on the flaring of methane, a potent greenhouse gas.

"We flare enough gas to offset nearly all of the E.U.'s gas imports from Russia," he said.

But the Environmental Defense Fund said in a new report that "oil company commitments to reduce flaring have not translated into a decrease in total flared gas. Instead, natural gas flaring was up slightly in 2021 over the previous year."

The group said the flared gas could fetch about $40 billion at market prices.

"Wasting this valuable product is harmful, particularly at a time when countries are grappling with an energy crisis," the fund said.

The Environmental Defense Fund report also warned that the oil and gas industry is not on schedule to meet a target of achieving zero routine flaring by 2030. The report stated that flaring volumes would have to tumble 19% a year through 2030 to achieve zero routine flaring from all global oil production.

The world's biggest emitter of methane is China, accounting for about 30% of all emissions. Senior administration officials said White House special climate adviser John Kerry had spoken to Chinese negotiator Xie Jianhua "multiple times" in the past month.

U.N. Secretary General Antonio Guterres, who is attending the meeting, said fossil fuel companies had "exploited precisely the same scandalous tactics as Big Tobacco decades before. Like tobacco interests, fossil fuel interests and their financial accomplices must not escape responsibility."