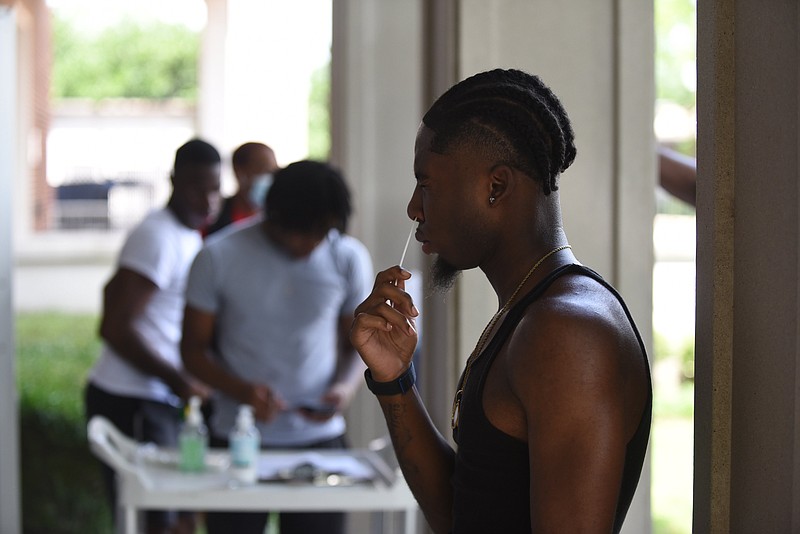 Eddie McDade, a student at Philander Smith College, swabs his nose for a covid-19 test Friday, June 17, 2022, during an Arkansas Foundation for Medical Care and Arkansas Department of Health vaccine and testing clinic at D.W. Reynolds Library. (Arkansas Democrat-Gazette/Staci Vandagriff)

Arkansas' count of coronavirus cases rose Friday by 780 -- a smaller increase than the previous two days but still larger than the one a week earlier -- while the number of people hospitalized in the state with the virus fell for the second day in a row.

With new cases outpacing recoveries, the number of cases in the state that were considered active rose by 238, to 8,133, topping 8,000 for the first time since Feb. 23.

For the third time in just over week, however, the state didn't report any additional deaths from covid-19.

The death toll, as tracked by the Arkansas Department of Health, remained Friday at 11,533.

The increase in cases, which followed spikes of 954 on Wednesday and 1,000 on Thursday, was larger by 110 than the one the previous Friday.

Already at its highest level since the week ending Feb. 26, the average daily increase in the case count over a rolling seven-day period rose to 695.

"We're just building this kind of increasing mass of infectious cases that could potentially spread covid-19 to other people," Health Department Director Jennifer Dillaha said, noting the active case total has increased by about 2,000 over the past week.

She said said a strain of the omicron variant known as BA.5 appears to be causing a growing share of the cases.

Through genomic sequencing conducted at its laboratory, she said the department on Friday identified 41 cases that had been caused by BA.5 and 20 that were caused by another strain, BA.2.12.1, that is dominant nationwide.

By contrast, as of Tuesday, only nine cases of BA.5 had been identified in Arkansas.

"This is a marked increase," Dillaha said.

The total number of cases caused by each subvariant isn't known because only a portion of test specimens are submitted for sequencing.

Dillaha said she's concerned about people at high risk for severe illness from covid-19 as well as the potential for even mild initial infections to result in long-term symptoms such as fatigue and cognitive impairment.

After falling by three on Thursday, the number of people hospitalized in the state with covid-19 fell Friday by 15, to 181.

The number of the state's virus patients who were on ventilators, which rose by one on Thursday, remained Friday at nine.

The number who were in intensive care also didn't change, remaining for a third day at 26.

At its hospitals in Little Rock and Springdale, Arkansas Children's had eight covid-19 patients on Friday, up from six on Thursday, spokeswoman Hilary DeMillo said.

The University of Arkansas for Medical Sciences Medical Center in Little Rock had 21 covid-19 patients on Friday, up from 16 on Thursday and just nine on June 8, spokeswoman Leslie Taylor said.

The patients on Friday included two who were in intensive care.

About half of the 21 patients had been fully vaccinated, Taylor said.

Dillaha said she expects "moderate demand" initially for low-dose versions of the Pfizer and Moderna vaccines that were authorized by the U.S. Food and Drug Administration on Friday for children as young as six months old.

"Over time, hopefully people will come to recognize that kids do truly need protection from covid-19," Dillaha said.

While children tend to become seriously ill from covid-19 less often than adults, the virus was the fifth most common cause of death among children age 1-4 from March 1, 2020, to April 20, 2022, according to the the U.S. Centers for Disease Control and Prevention.

"I think it's important for people to be able to weigh the risks and the benefits, but we have more education we need to do so that parents can truly make an informed decision about whether or not to vaccinate their children," Dillaha said.

Although Arkansas has so far been allocated 35,800 doses of each vaccine, as of this week it had ordered less than half that amount.

The first wave of shipments, consisting of 15,000 doses of each vaccine, is expected to arrive between Monday and Friday of next week.

Those doses will go to nine of the Health Department's local health units around the state; those local units will then redistribute them to other health units as well as private clinics and pharmacies.

The second wave, with 3,100 doses, mostly of the Pfizer vaccine, is expected to arrive between Thursday and June 29 and includes shipments that will go directly to hospitals and pharmacies.

She said they may be waiting for recommendations that an advisory committee to the CDC is expected to issue today before deciding which vaccine they want.

If the shots are endorsed by the CDC, Arkansas Children's expects to receive the Pfizer vaccine for children up to age 4 next week, DeMillo said in an email. She said it will offer the shots at its primary care clinics around the state.

"When the vaccine is approved and in stock, families will be able to register for an appointment at www.archildrens.org/getmyvaccine," DeMillo said.

"We encourage families to vaccinate children of all ages and talk to their child's doctor if they have questions."

The Health Department's tally of vaccine doses that had been administered to people of all ages rose by 1,351, which was smaller by 377 than the daily increase a week earlier.

About 65% of the most recent increase was from people receiving their first booster shots.

The count of people starting the vaccination process rose by 259, which was down by 52 from the daily increase a week earlier.

According to the CDC, 67.3% of Arkansans had received at least one dose as of Thursday, when the vaccination data was last updated on the agency's website, and 54.9% had been fully vaccinated.

Of those who were fully vaccinated, 40.5% had received a booster dose.

Nationally, 78.1% of people had received at least one dose, and 66.8% were fully vaccinated.

Of the fully vaccinated population nationally, 47.2% had received a booster dose. 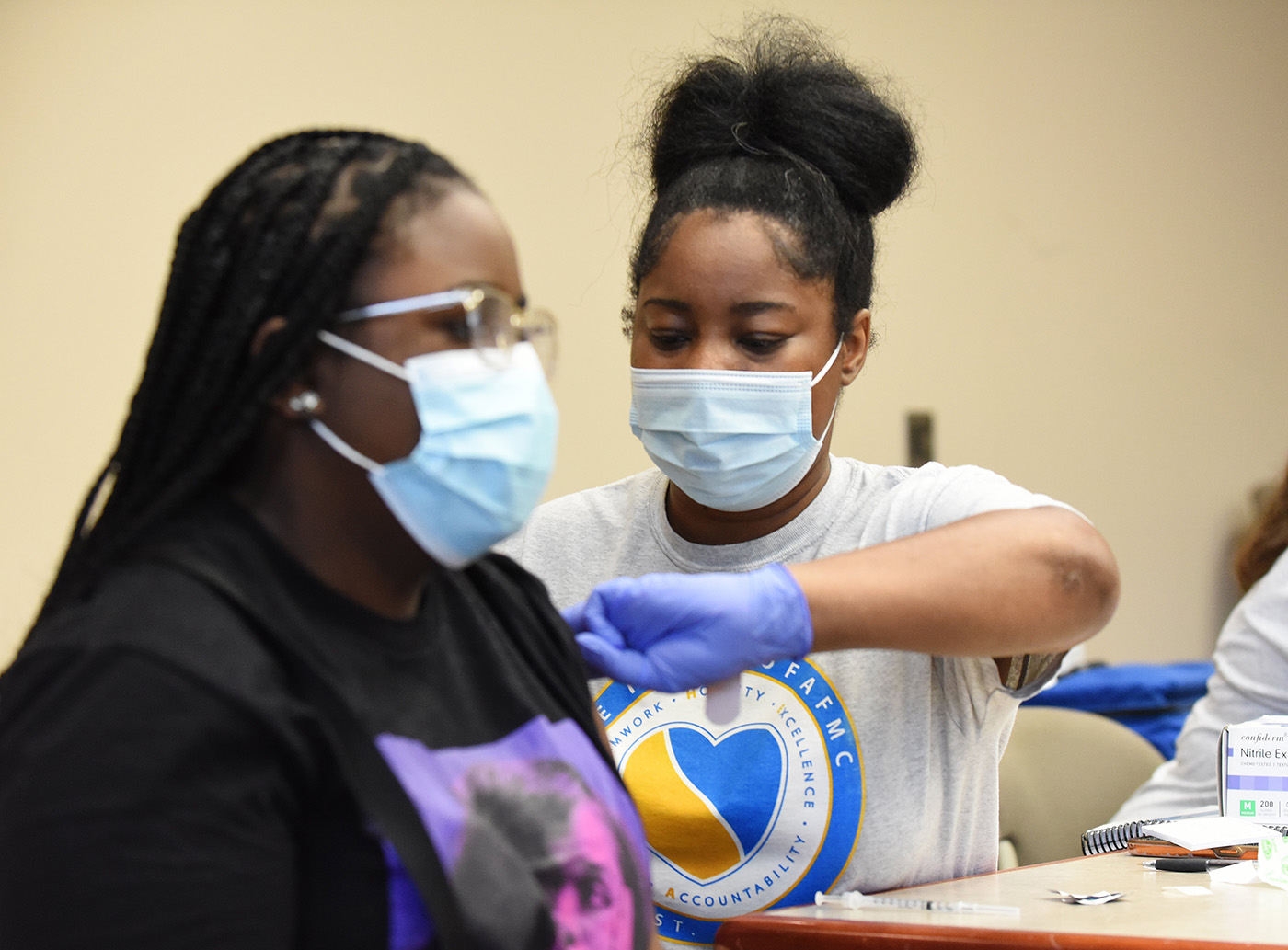