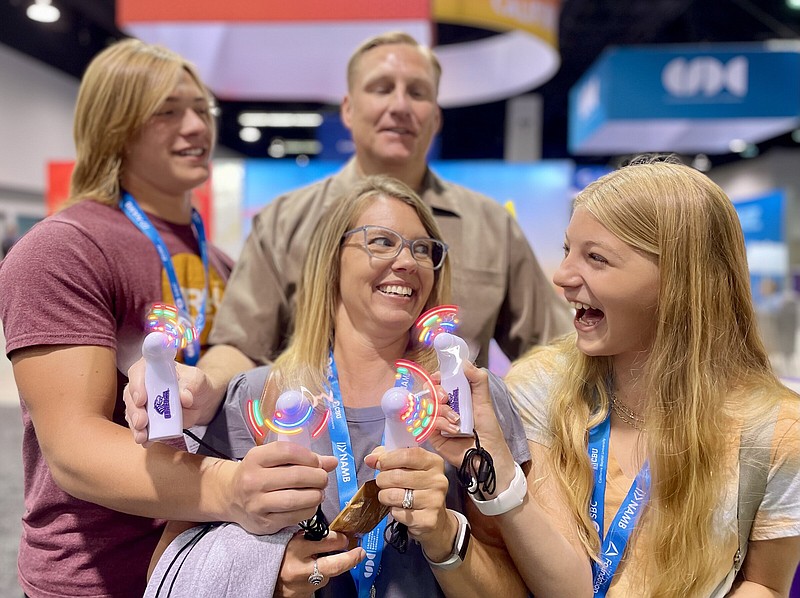 At the Southern Baptist Convention’s annual meeting in Anaheim, Calif. on Tuesday, members of a North Carolina family received free fans that spin and light up. Ouachita Baptist University officials passed out hundreds of the devices, while also promoting the Arkadelphia school and greeting alumni. (Arkansas Democrat-Gazette/Frank E. Lockwood)

ANAHEIM, Calif. -- For Arkansas' Southern Baptist colleges, the denomination's annual meeting is a golden opportunity to greet alumni and to woo potential students.

Earlier this week, representatives of Ouachita Baptist University in Arkadelphia staked out prime real estate in the Anaheim Convention Center exhibit hall, passing out promotional brochures as well as hand-held fans that light up and spin at the push of a button.

It's a trip the school's president, Ben Sells, tries not to miss.

"We have a lot of alumni who are pastors. About 10% of our student body majors in Christian studies for ministry. So they graduate and they go serve churches and this is a natural place for them to come," Sells said.

When the convention's in full swing, there's little down time.

"It's been a steady stream. There hasn't been a break all morning," he said.

Exhibitors, here and elsewhere at the convention, represent a variety of ministries, causes or products.

At many of the booths, visitors can pick up swag -- spongy stress balls, Hershey's chocolate and cotton T-shirts are popular items.

Elsewhere at the convention, DaySpring, with headquarters in Siloam Springs, was giving away a large assortment of Christian greeting cards -- no strings attached.

Officials from Williams Baptist University in Walnut Ridge passed out pens and tote bags while highlighting a program that enables students to graduate debt-free.

Stan Norman, the school's president, was manning the booth, insisting it was time well spent.

"[Alumni] come by, friends come by. In some ways, it's kind of like a Baptist family reunion, so this environment provides an opportunity for us to interact, fellowship and encourage one another with a platform we wouldn't have any other way," he said.

For young people interested in pursuing post-secondary education in an evangelical setting, the exhibition is a bonanza.

Connections made this week will result, sooner or later, in new college admissions said Will Brantley, Oklahoma Baptist University's vice president for enrollment management and marketing.

"Every year, we have at least two or three students who come to [Oklahoma Baptist University] because we met them at the convention," he said.

This year is no exception.

"We've got a student that we met this week who is a rising senior from another state who applied last night and is now really interested and wants to come visit," he said.

Regardless of interest level, visitors are offered a free Oklahoma Baptist T-shirt featuring the school mascot, a Bison. Stragglers may not get the size they want, however.

As closing time approached Wednesday, Brantley and the others were trying to dump their remaining inventory: A dozen cotton T-shirts. All of them XXXL.