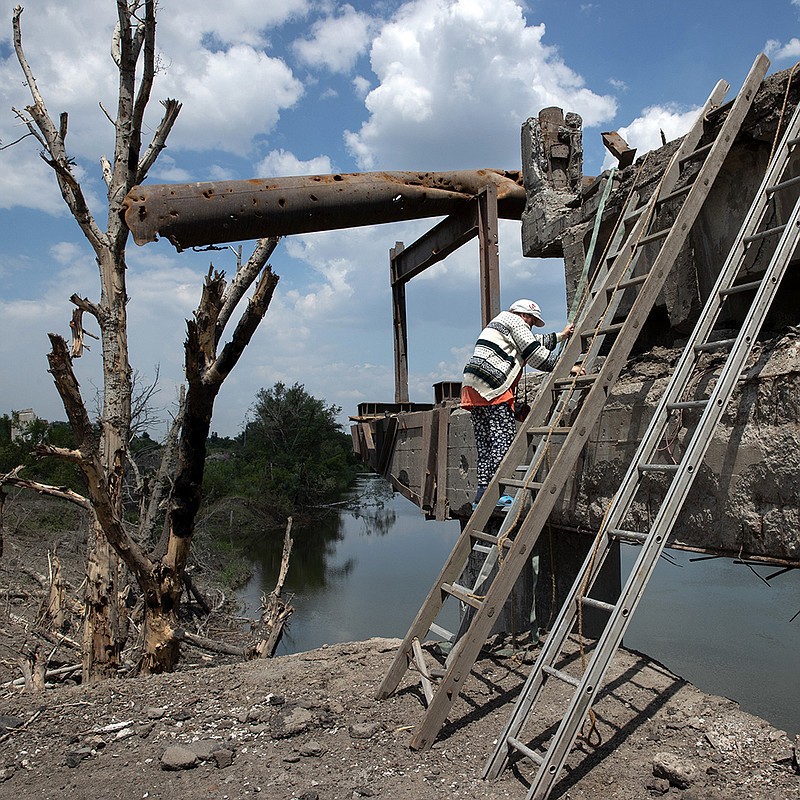 Vitlana Zhyvaga, 54, who lives in Lysychansk, Ukraine, makes her way across one of the bridges, all of which have been destroyed, linking her city with neighboring Severodonetsk on Friday. As they batter towns and cities in Ukraine with artillery, the Russians are also bombarding them with messaging aimed at eroding Ukrainians’ trust in their military and their government. More photos at arkansasonline.com/ukrainemonth4/. (The New York Times/Tyler Hicks)

KYIV, Ukraine -- The European Union's executive arm recommended putting Ukraine on a path to membership Friday, a symbolic boost for a country fending off a Russian onslaught that is killing civilians, flattening cities and threatening its very survival.

The European allies' latest embrace of Ukraine marked another setback for Russian President Vladimir Putin, who launched his war nearly four months ago, hoping to pull his ex-Soviet neighbor away from the West and back into Russia's sphere of influence.

At Russia's showpiece economic forum in St. Petersburg on Friday, Putin said Moscow "has nothing against" Ukraine joining the EU, because it "isn't a military organization, a political organization like NATO." He also reprised his usual defense of the war, alleging it was necessary to protect people in parts of eastern Ukraine controlled by Moscow-backed rebels and to ensure Russia's own security.

Johnson's trip to Kyiv followed one Thursday by the leaders of Germany, France, Italy and Romania, who pledged to support Ukraine without asking it to make any territorial concessions to Russia.

"We are with you to give you the strategic endurance that you will need," Johnson said on his second visit to the country since the Feb. 24 start of the war.

Although he did not detail the aid, he said Britain would lead a program that could train up to 10,000 Ukrainian soldiers every 120 days in an unspecified location outside the country.

The training program could "change the equation of this war," he said. Ukraine has been taking heavy casualties in fighting in the east.

"I completely understand why you and your people can make no compromise with Putin because if Ukraine is suffering, if the Ukrainian troops are suffering, then I have to tell you that all the evidence is that Putin's troops are under acute pressure themselves and they are taking heavy casualties," he said. "Their expenditure of munitions, of shells and other weaponry, is colossal."

Since his April visit, "the Ukrainian grit, determination and resilience is stronger than ever, and I know that unbreakable resolve will long outlive the vain ambitions of President Putin," he said.

Johnson said the U.K. will work to intensify the sanctions on Russia. He praised the resilience of Ukrainians and how "life is coming back to the streets" of Kyiv, but noted that "only a couple of hours away, a barbaric assault continues. Towns and villages are being reduced to rubble."

Zelenskyy gave Johnson a tour of a monastery where they lit candles and the British leader received an icon. They placed flowers at an outdoor memorial wall displaying photos of soldiers who fell in fighting in 2014, viewed an exhibit of damaged, rusting Russian weapons and greeted cheering crowds.

"We have a common view of the movement toward Ukraine's victory. I'm grateful for the powerful support!" Zelenskyy said on Telegram.

The possibility of membership in the EU, created to safeguard peace on the continent and serve as a model for the rule of law and prosperity, fulfills a wish of Zelenskyy and his Western-looking citizens.

The European Commission's recommendation that Ukraine become a candidate for membership will be discussed by leaders of the 27-nation bloc next week in Brussels. The war has increased pressure on EU governments to fast-track Ukraine's candidacy, but the process is expected to take years, and EU members remain divided over how quickly and fully to welcome new members.

Political and military support from Western countries has been key to Ukraine's surprising success against larger and better-equipped Russian forces. Zelenskyy has also clamored for additional immediate support in the form of more and better weapons to turn the tide in the industrial east, known as the Donbas.

Russia has pressed its offensive in the east, leaving desperate residents worried about their future.

"We are old people, we do not have a place to go. Where will I go?" asked Vira Miedientseva, an elderly resident grappling with the aftermath of an attack Thursday in Lysychansk, just across the river from Sievierodonetsk, where a key battle is raging.

Russian forces have switched their focus to the Donbas after a series of setbacks early in the war, including the failure to seize Ukraine's capital.

The Ukrainian military said Moscow's troops kept up relentless attacks on Sloviansk and Sievierodonetsk, the focus of recent fighting. The military claimed Ukrainian forces pushed Russian fighters out of the village of Bohorodychne, north of Sloviansk.

Russia and its allies say they have taken about half of Donetsk and nearly all of Luhansk the two regions that make up the Donbas. Sievierodonetsk and surrounding villages are in the last pocket of Luhansk region still in Ukrainian hands.

"The Russians are pouring fire on the city," said Luhansk Gov. Serhiy Haidai. "It's getting harder and harder for us to fight in Sievierodonetsk, because the Russians outnumber us in artillery and manpower, and it's very difficult for us to resist this barrage of fire."

The constant shelling made it impossible for 568 people, including 38 children, sheltering in the Azot chemical plant in the city to escape, he said. Russian forces have destroyed all three bridges leading from the city, but Haidai said it still had not been fully blocked off.

Moscow's envoy for Russia-backed separatists who control much of the territory around Sievierodonetsk said an evacuation from the Azot plant still could take place.

Rodion Miroshnik of the self-proclaimed Luhansk's People's Republic said on social media that Russian troops and separatists are "ready to consider options for opening a humanitarian corridor for the exit of civilians, but subject to strict adherence to the cease-fire."

The Ukrainian navy claimed it destroyed a Russian boat carrying air defense systems to a strategic island in the Black Sea. The navy said on social media that the Vasily Bekh was used to transport ammunition, weapons and personnel to Snake Island, which is vital for protecting sea lanes out of the key port of Odesa.

Meanwhile, Putin began his address to the St. Petersburg International Economic Forum with a lengthy denunciation of countries that he contends want to weaken Russia, including the United States.

He said the U.S. "declared victory in the Cold War and later came to think of themselves as God's own messengers on planet Earth."

Putin decried the sanctions imposed on Russia by the U.S. and its allies as "insane and, I would say, reckless."

"The calculation was understandable: to impudently, with a swoop, crush the Russian economy by destroying business chains, forcing the withdrawal of Western companies from the Russian market, freezing domestic assets, hitting industry, finance, and the people's standard of living. It didn't work," he said.

Hundreds of foreign companies also suspended operations in Russia or pulled out of the country entirely.

"Russian enterprises and government authorities worked in a composed and professional manner," he said. "We're normalizing the economic situation. We stabilized the financial markets, the banking system, the trade system."

Russia's projected inflation rate has fallen marginally, but the current projected annual rate of 16.7% is still too high, he said.

Putin also vehemently defended his country's actions in Ukraine. Russia has contended its neighbor posed a threat because of its desire to join the NATO military alliance.

"In the current situation, against a backdrop of soaring risks and threats, Russia's decision to conduct a special military operation was a forced one," the Russian leader said. "It was very hard to make it, but it was forced and necessary. It was a decision by a sovereign country that has an unconditional right, based on the U.N. Charter, to defend its security."

Putin predicted Russia's success in Ukraine after more than 16 weeks of fighting.

"All of the special military operation's objectives will definitely be attained," he said. "This is predetermined by the courage and heroism of our warriors, the consolidation of Russian society, whose support gives strength and confidence to Russia's army and navy, the profound understanding of the rightness and historic justice of our cause."

Russia also "will accept any of the choices" the Donetsk and Luhansk People's Republics in the Donbas region of eastern Ukraine make about their futures, Putin said.

A group of volunteers called the "IT Army of Ukraine" said it carried out a cyberattack that delayed Putin's St. Petersburg speech.

The group was convened by Ukraine after the invasion to launch cyberattacks against Russian targets. It said it carried out a distributed denial-of-service attack, which leverages networks of zombie computers to flood websites with junk traffic, rendering them unreachable.

In other developments Friday, Zelenskyy announced that Russia has freed Yuliia Paievska, a celebrated Ukrainian medic who used a body camera to record her work in Mariupol while the port city was under Russian siege.

Paievska, known in Ukraine as Taira, got the clips to an Associated Press team on March 15, the day before she was captured by Russian troops. Zelenskyy said Paievska is "already home." He said Ukraine will continue working to free all those held by the Russians.

The war's disruption to exports of grain and other crops from Ukraine that feed the world has captured global attention and sent bread prices soaring across the world. But the production of other, more niche foodstuffs has also been impacted, including for a Ukrainian snail farmer.

Russia also reduced natural gas to Europe again Friday, including cutting flows by half to Italy and Slovakia and completely to France, as countries have worked to ease their dependence on Russian supplies.

Russia blamed a technical problem for the cuts to the key Nord Stream 1 pipeline serving Germany and France, saying equipment being refurbished in Canada was stuck there because of Western sanctions. Leaders in Germany and Italy called the reductions a political move, and it's escalated the energy tensions in Europe, following Russia's previous cutoff of natural gas to Poland, Bulgaria, Finland, the Netherlands and Denmark.

Zelenskyy said Friday the reductions are "blackmail [against] both individual countries and Europe as a whole."

The EU is trying to reduce gas imports from Russia by two-thirds by the end of the year and has used imported liquid gas from the United States to start making up that gap. But an explosion and fire at a key U.S. export facility in Freeport, Texas, took one-fifth of the country's gas export capacity offline and underlined concerns about the fragility of Europe's gas supplies.

The organizer of the Eurovision Song Contest said it will start talks with the BBC on possibly holding next year's event in the U.K. after concluding it can't be held in Ukraine. The Ukrainian band Kalush Orchestra won the 2022 contest, buoying Ukrainian spirits. The event is traditionally staged by the previous year's winner. 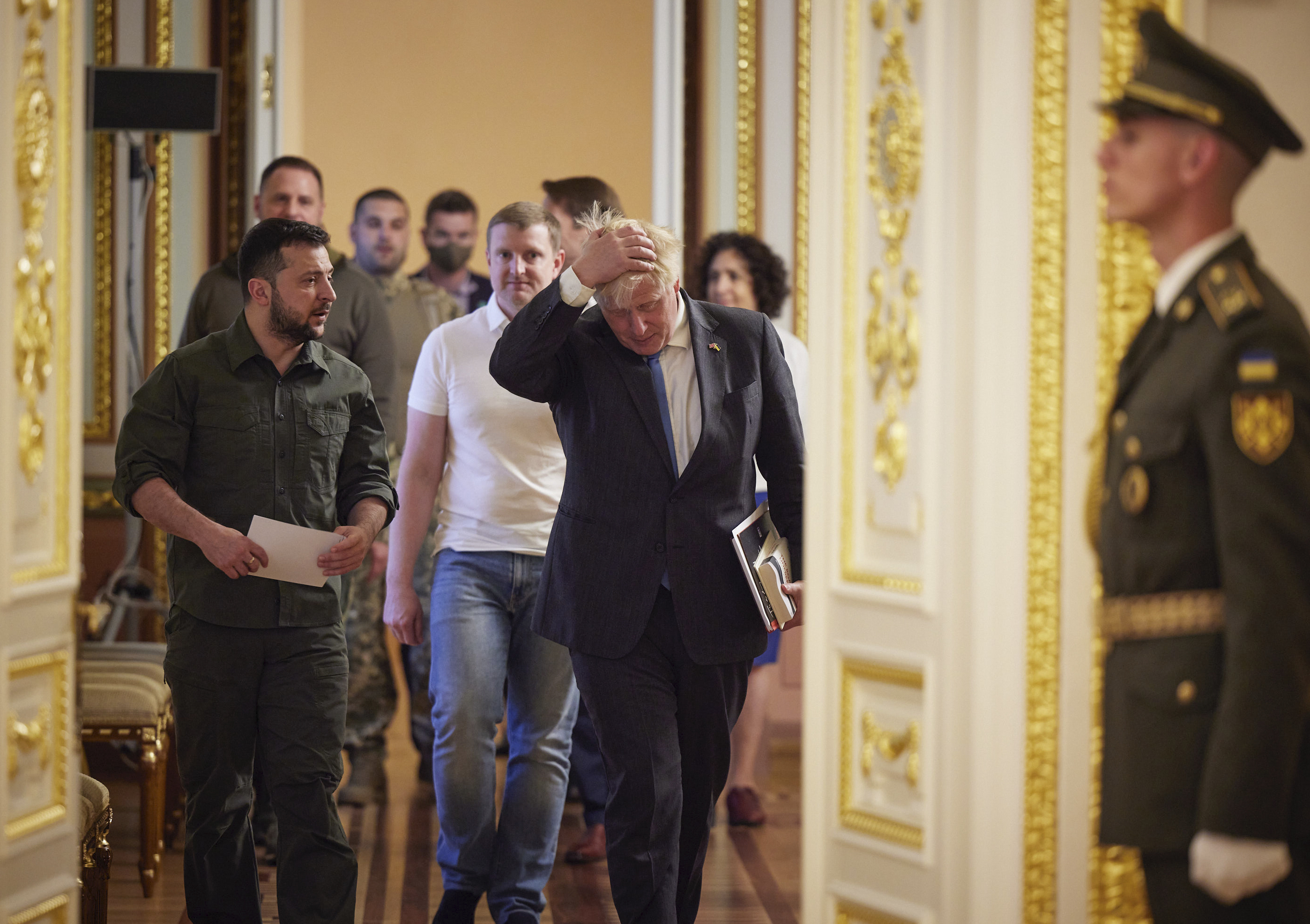 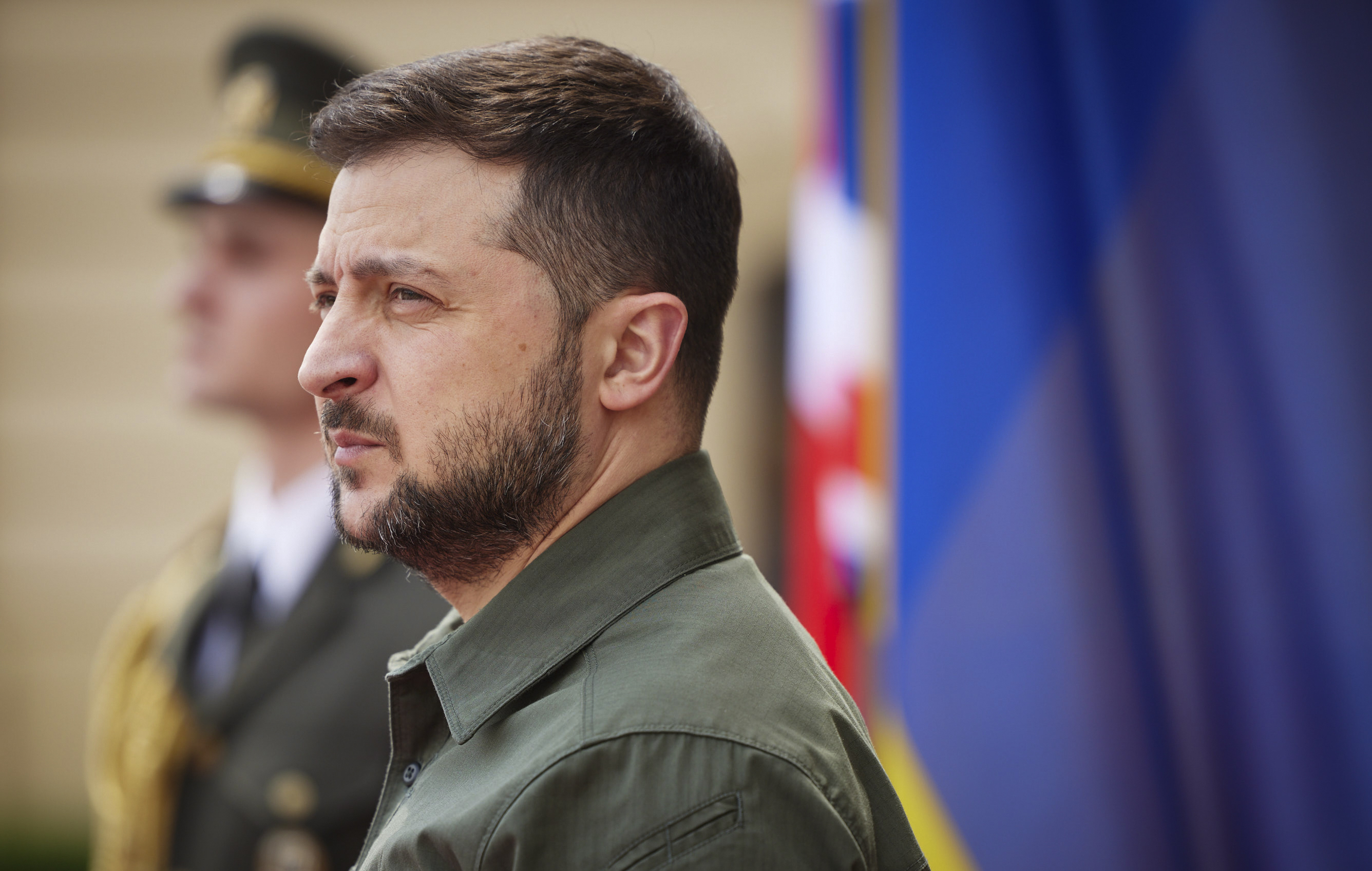 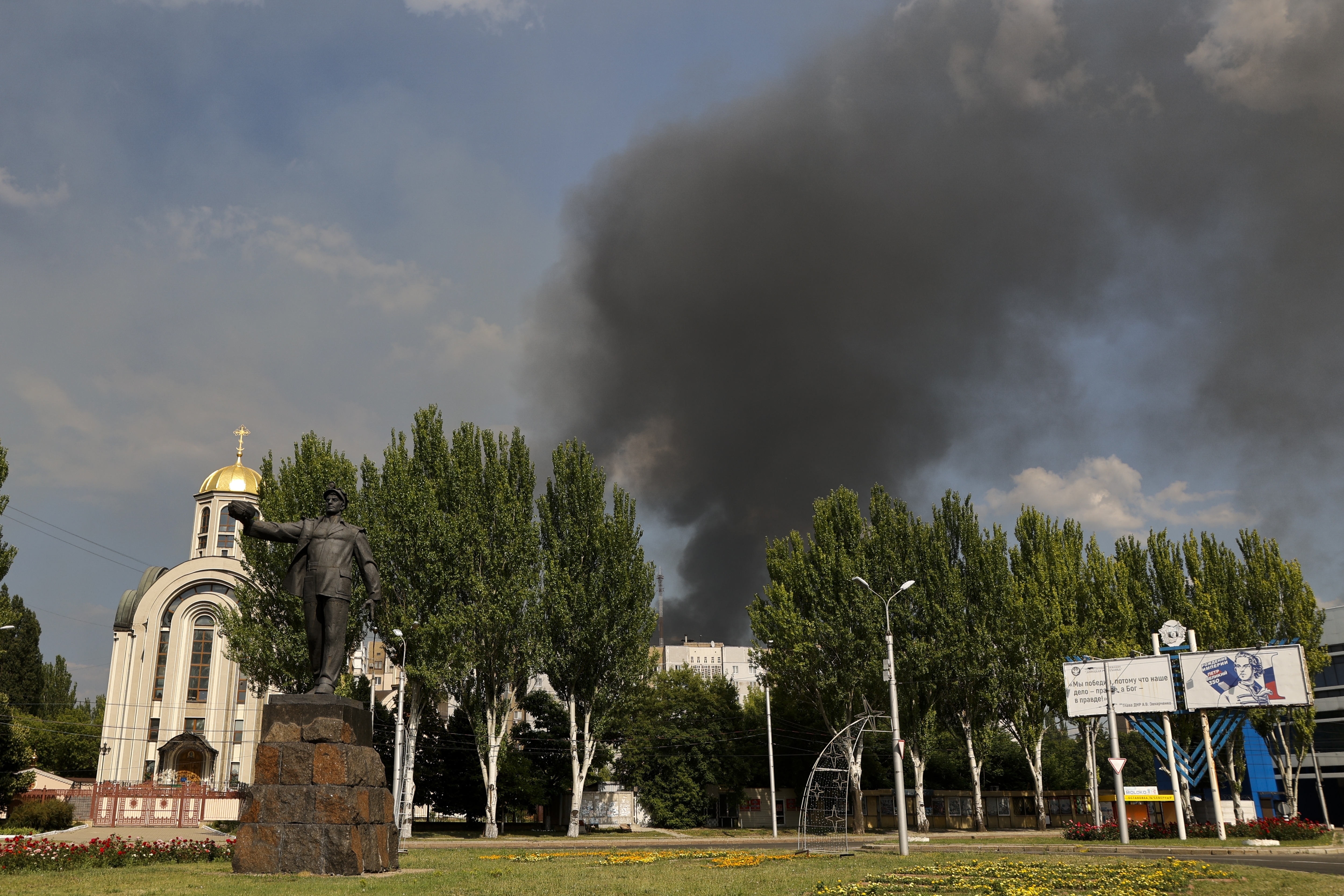 Smoke rises from a burning house following shelling in Donetsk, on the territory which is under the Government of the Donetsk People's Republic control, eastern Ukraine, Friday, June 17, 2022. (AP Photo/Alexei Alexandrov) 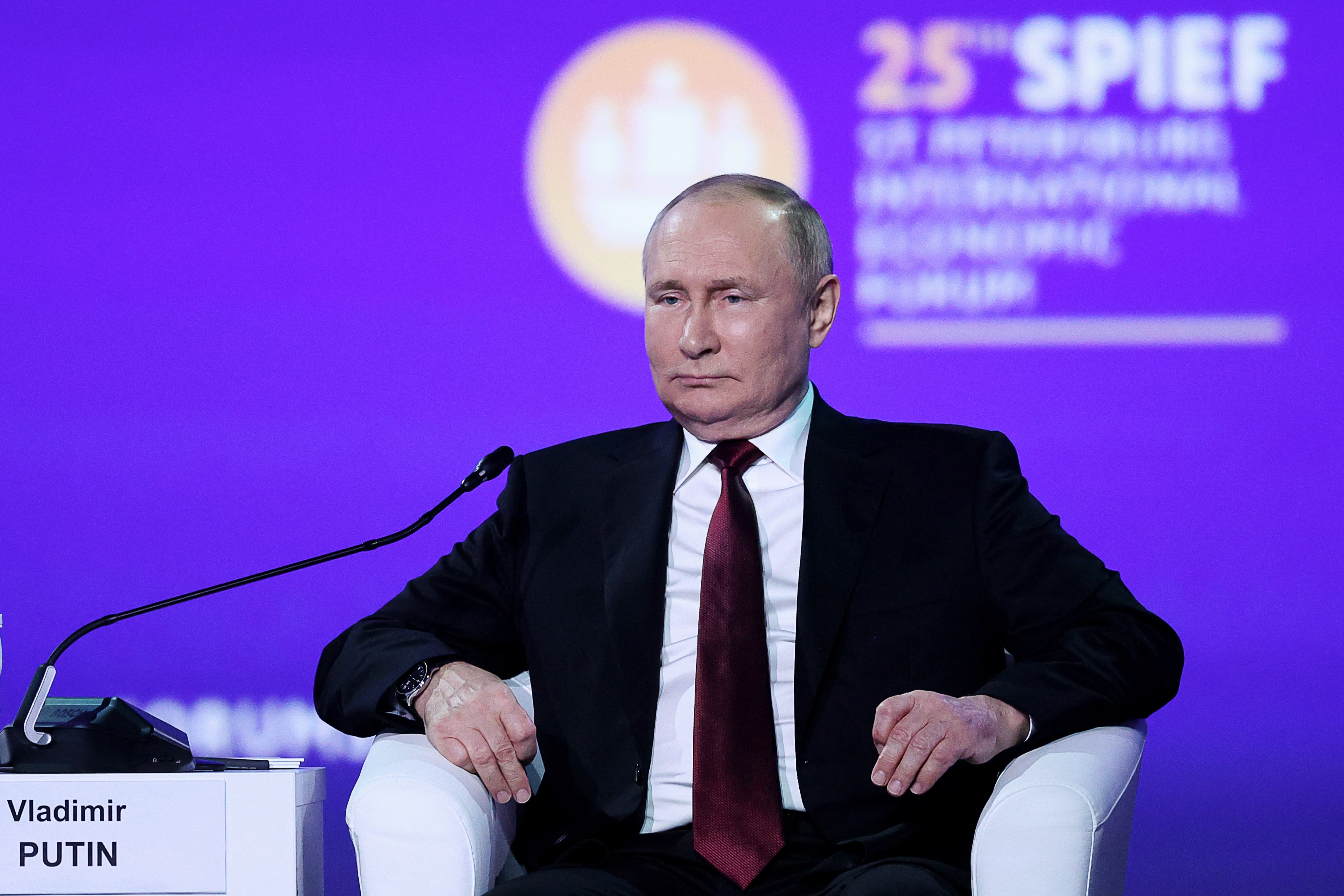 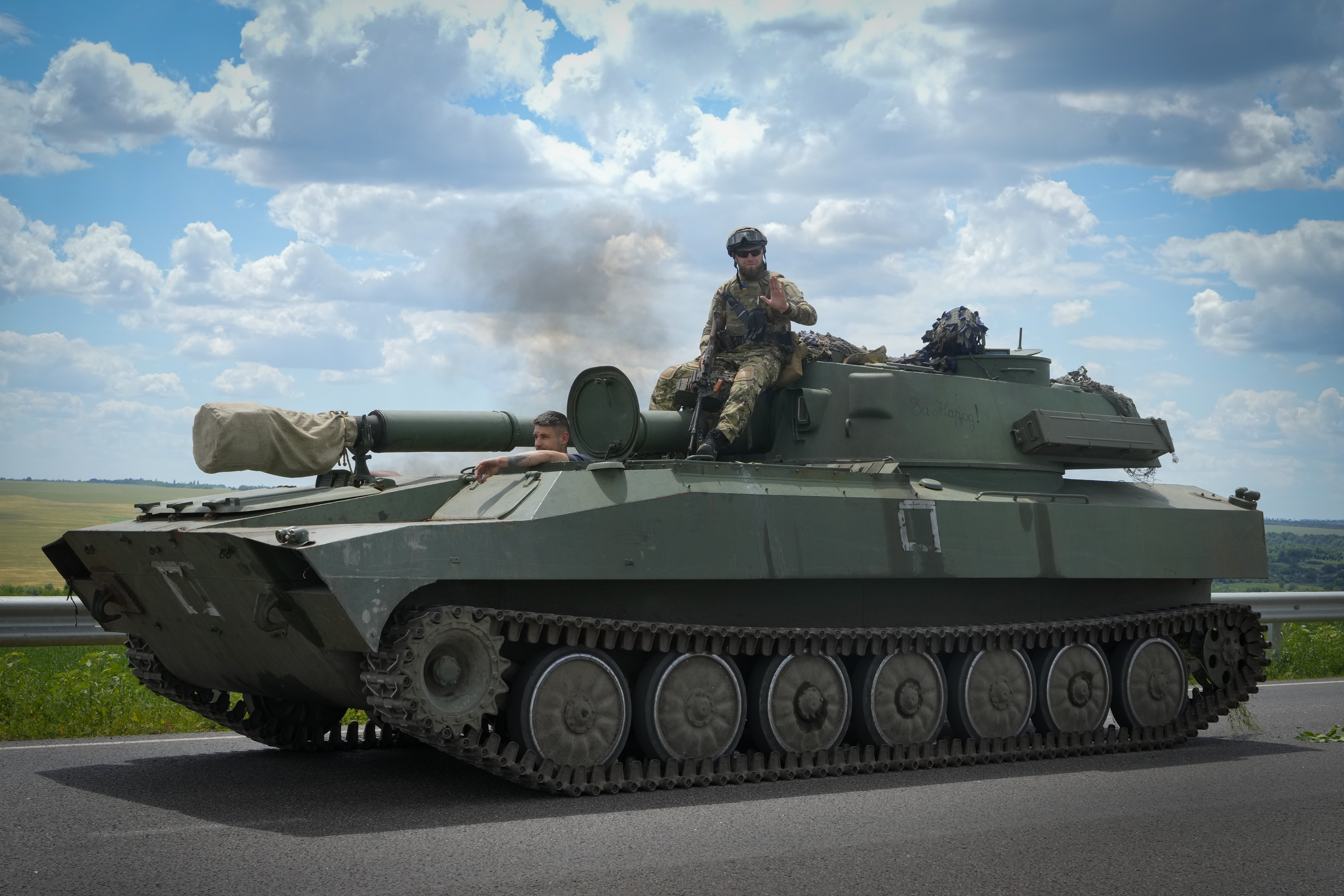 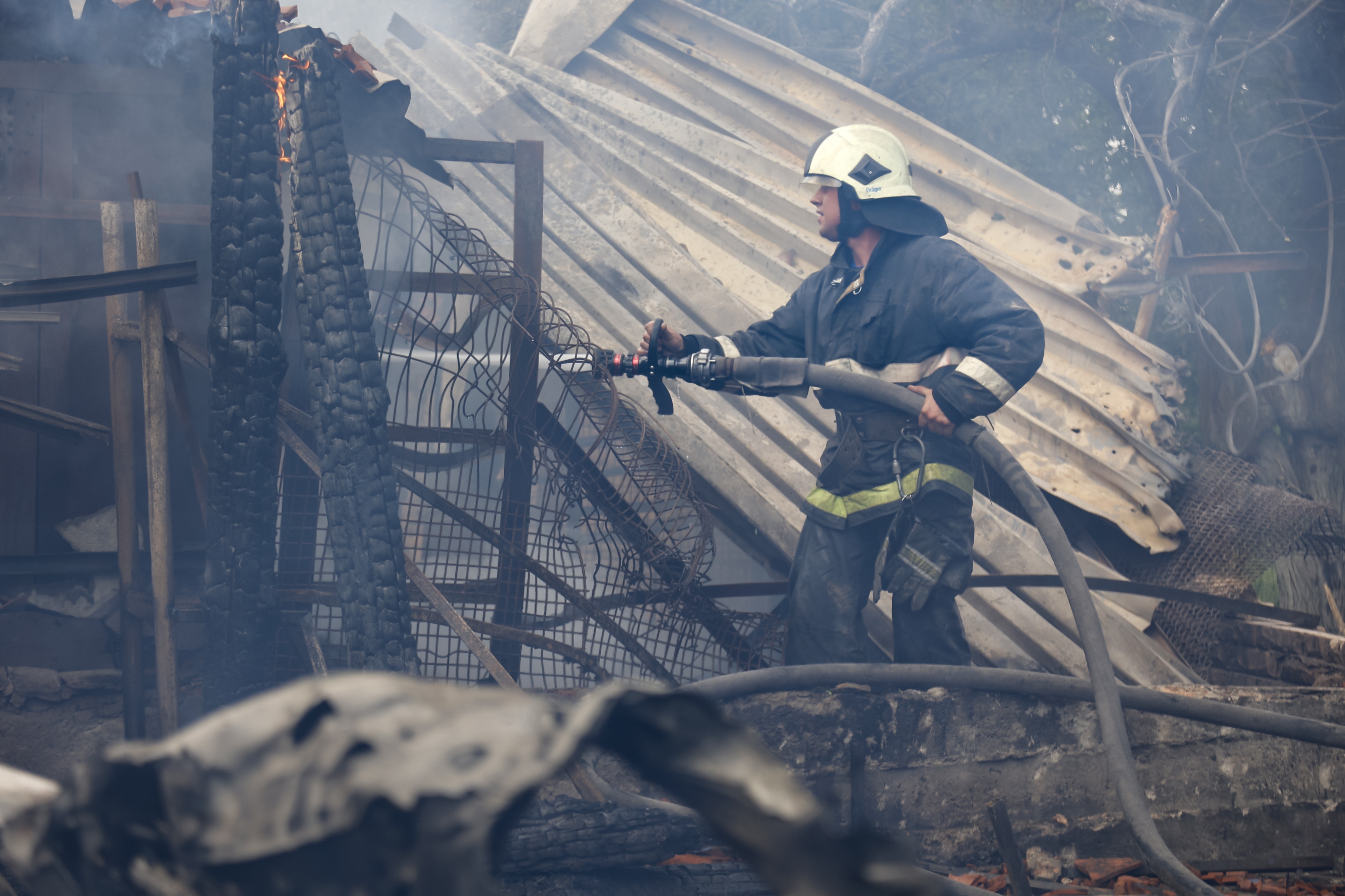 Donetsk People Republic Emergency Situations Ministry employees work at the scene of a burning house after the shelling in Donetsk, on the territory which is under the Government of the Donetsk People's Republic control, eastern Ukraine, Friday, June 17, 2022. (AP Photo/Alexei Alexandrov) 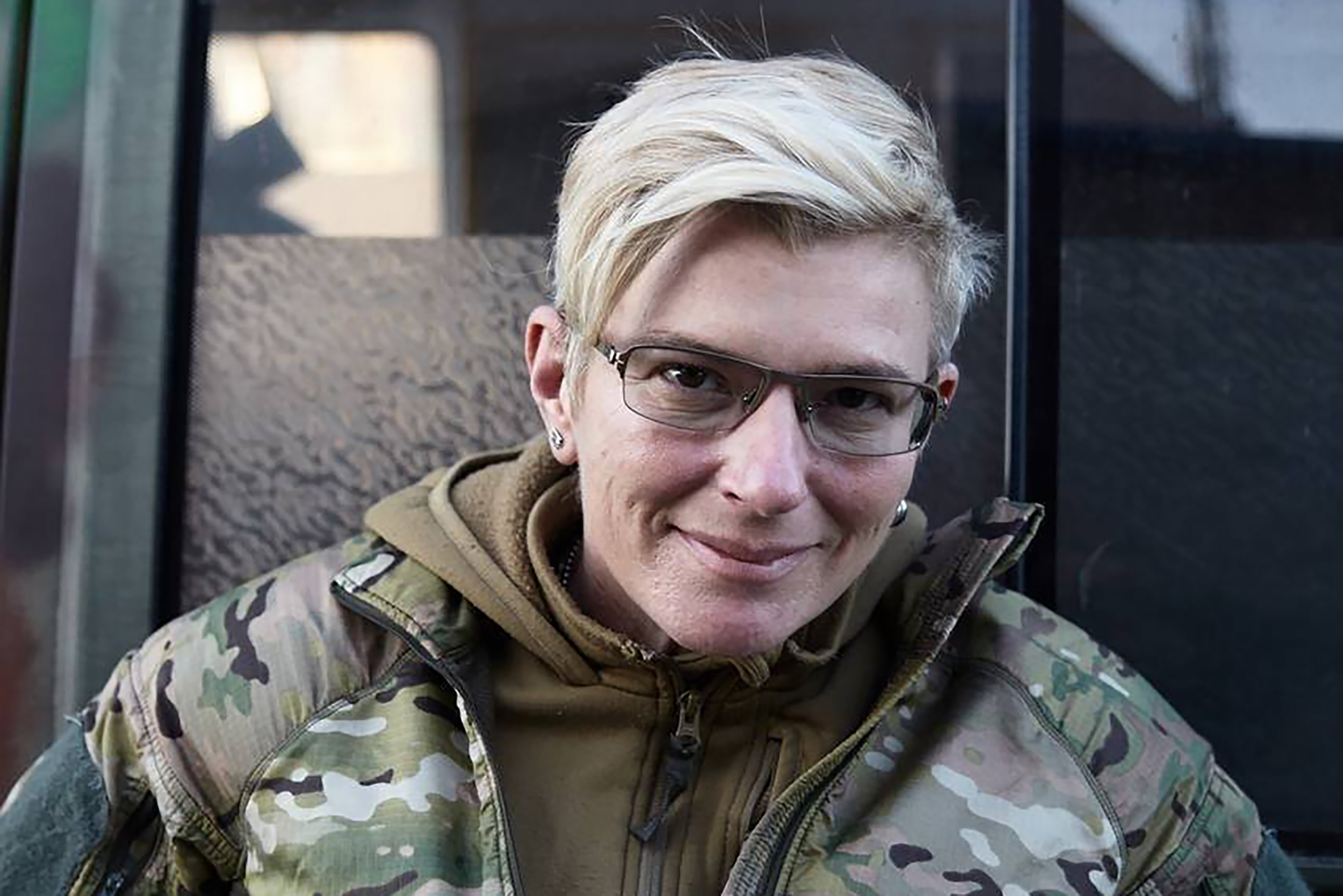 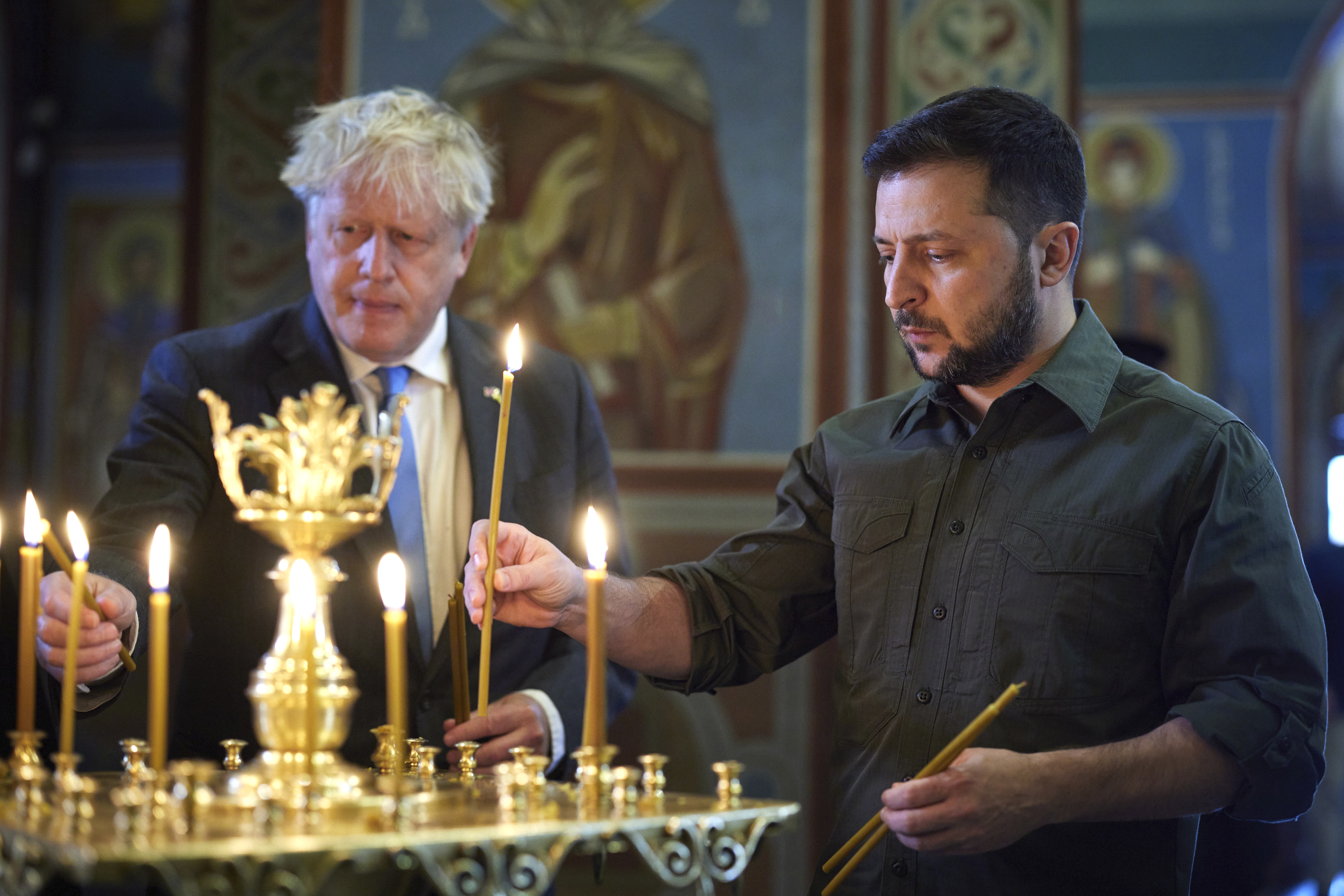 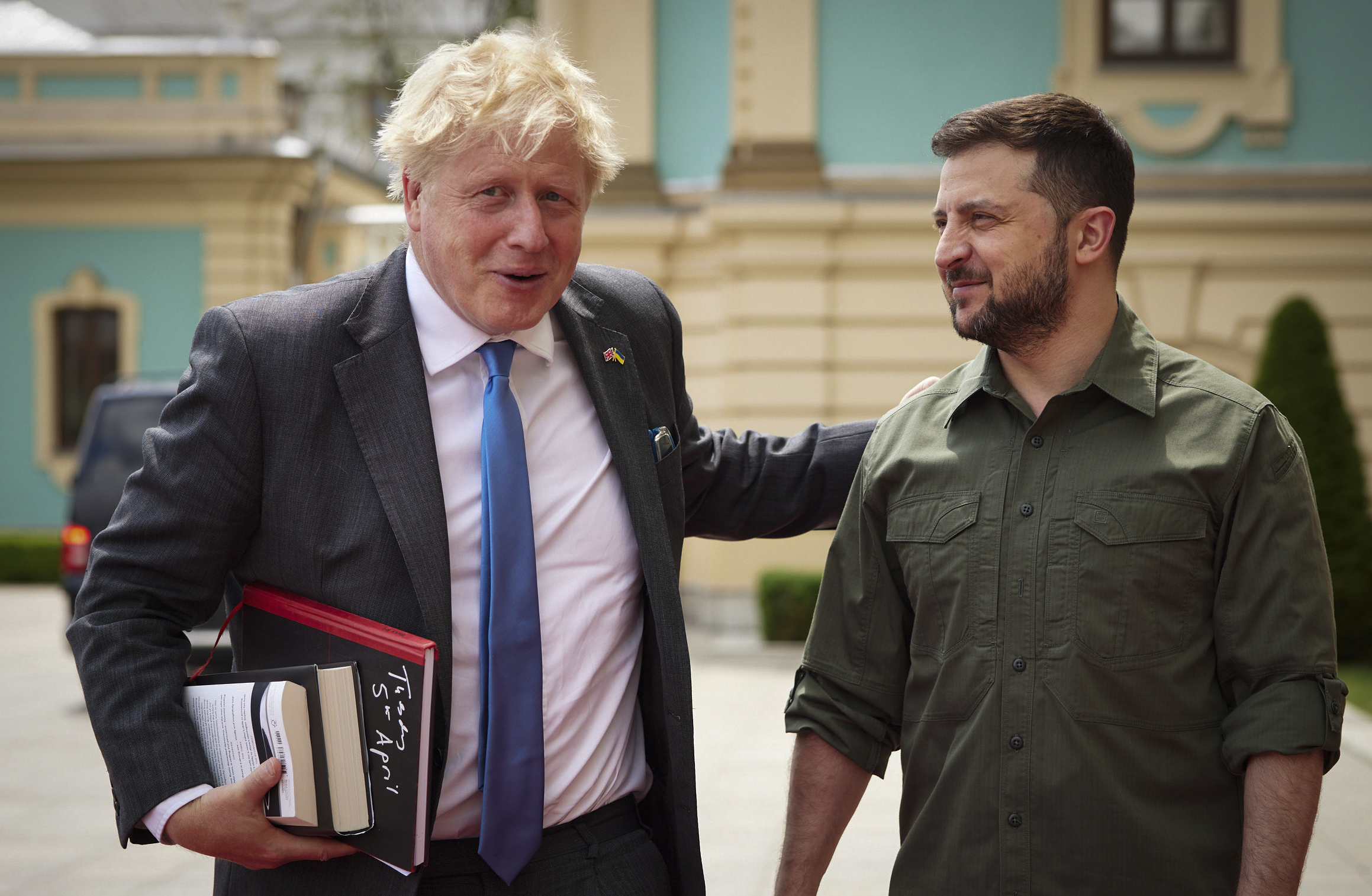 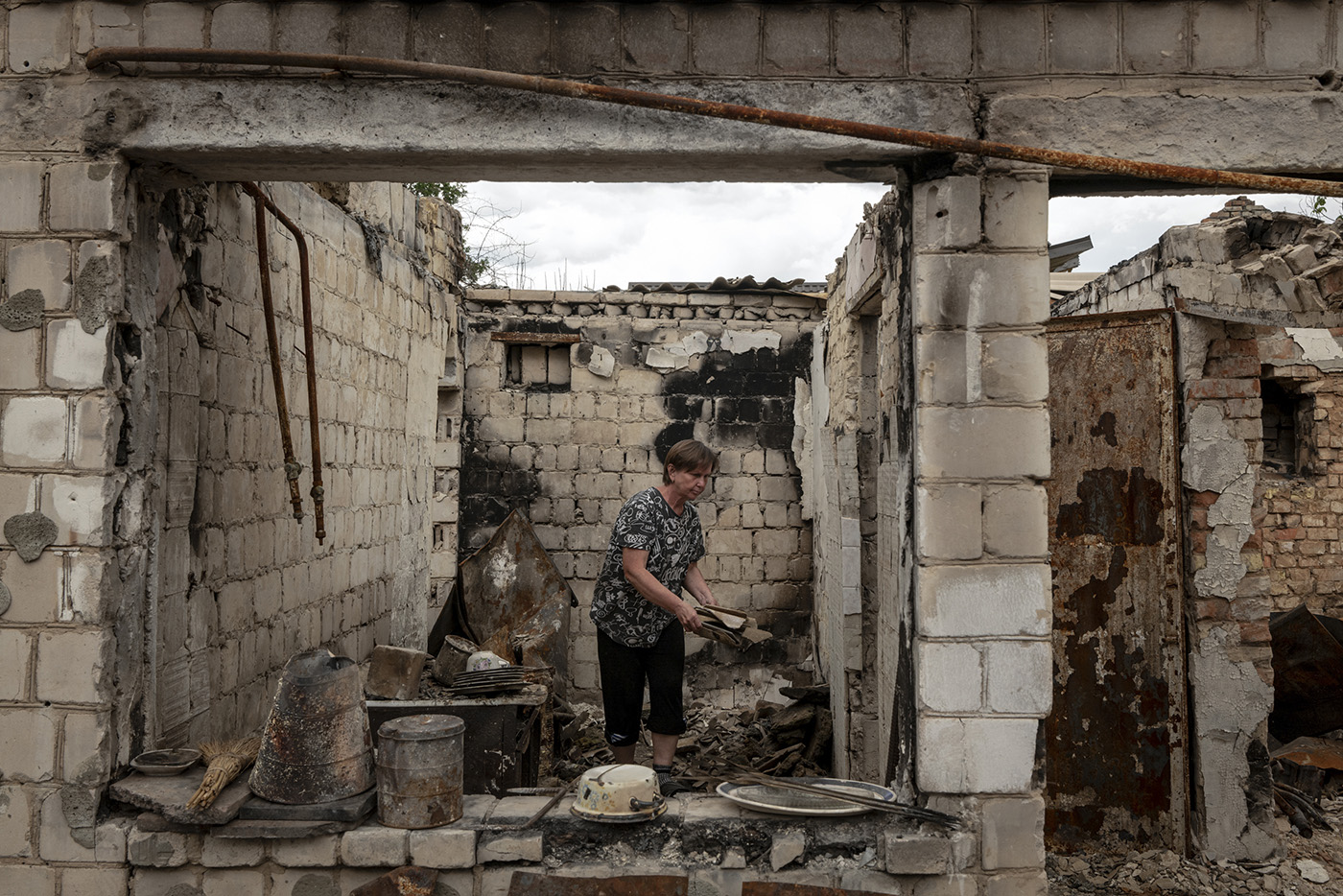 Tetiana Bykova, 60, clears the kitchen of a destroyed home in her family’s complex in Irpin, Ukraine, on Friday. Four houses belonging to an extended family were destroyed in Russian strikes in March. (The New York Times/Nicole Tung) 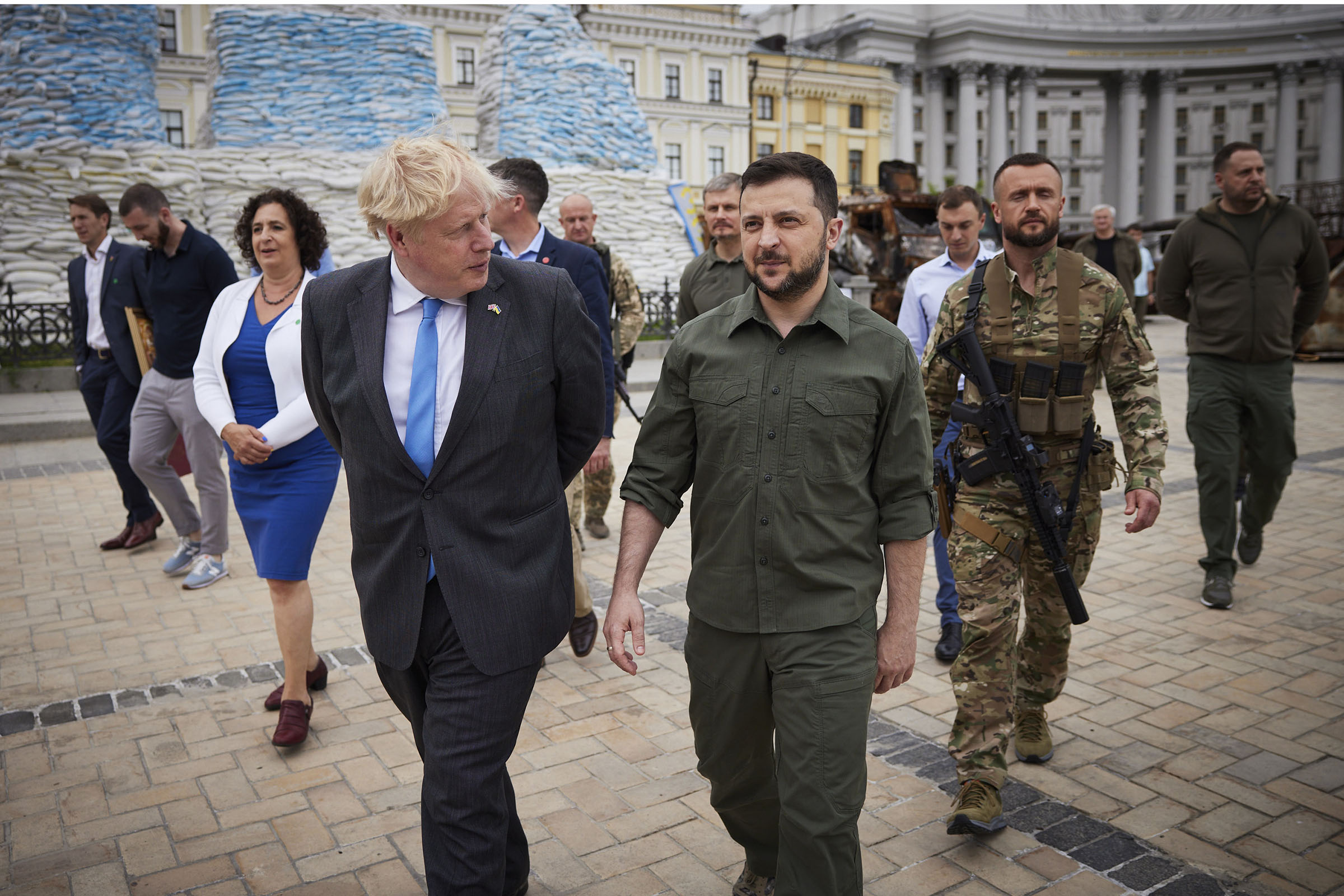