Getting a handle on aspects of today’s flatware 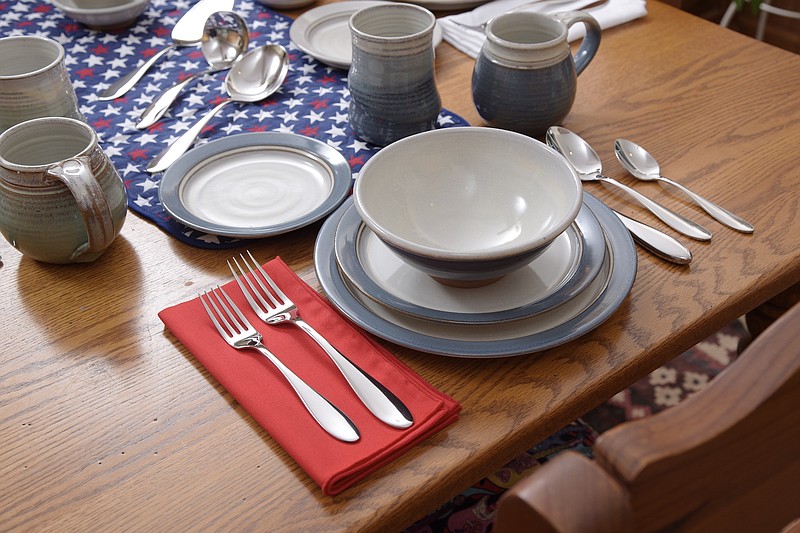 Liberty Tabletop sells 33 flatware patterns, including the Betsy Ross pattern pictured, at prices ranging from $199 to $539 for a 65-piece place setting. Women over 40 who want to set a nice table are the target audience. (Courtesy of Sherrill Manufacturing)

Now here's something to chew on. What common household item do you hold and put it in your mouth 50 times a day? That's more than your toothbrush. And when was the last time you thought about it?

I hadn't paid my flatware much attention since I bought it 30 years ago. It's just been there, in the drawer, waiting to transport food to my mouth, which I appreciate. But recently I discovered I had half as many forks and spoons as knives. What happened? We started out with the same number of each.

"The forks ran away with the spoons!" I cried to Greg Owens, co-owner of Sherrill Manufacturing, the last remaining maker of flatware in the United States, which is why I thought he might care.

Owens, who unlike me, actually does give flatware a lot of thought, had heard this before. "Forks and spoons often get lost to trash cans, lunch sacks, picnics and camping trips," he said, then launched into a little history.

He told me how he and his partner, Matthew Roberts, both veterans of the steel business, stepped up when, in 2005, Oneida Limited, one of the world's leading flatware manufacturers, closed its U.S. manufacturing plant, which had been making silverware since 1860 (think Abraham Lincoln), and moved all operations offshore.

"Oneida could buy finished flatware made in China cheaper than it could buy the metal to produce their product in the United States, so they left," Owens said.

Owens and Roberts took over the manufacturing facility, continued to employ many of the workers, and christened the new operation Sherrill Manufacturing, named after the city in New York, where it's based. A few years later, they began making Liberty Tabletop flatware, which now sells 33 different patterns online directly to consumers.

But back to me.

I still had a serious fork and spoon problem. I checked online at Replacements Unlimited, the company that sells individual pieces of china, crystal and silverware to those who've broken or lost pieces or have gaps in their sets. No luck. I found the brand of my old flatware, but not the style.

Which meant only one thing: New flatware. As I began shopping for something I hadn't bought in decades, and likely won't ever buy again, I figured I'd better learn what I should look for. Here's what I discovered makes the cut:

◼️ Material. The key quality to look for when choosing stainless-steel flatware is the metal content. The back usually has a stamp that reads 18/10, 18/8 or 18/0. This ratio represents the amount of chromium to nickel in the metal alloy. Nickel (the second number) gives utensils their luster and durability, and reduces their susceptibility to pitting, rusting, clouding and staining. Because nickel is expensive, many manufacturers skimp. Today, most imports are 18/0, said Owens, whose company makes only 18/10 flatware.

Beside metal ratio, another way to judge flatware is by the quality of its finish. Pieces should have an even luster with no pitting, no irregular pattern detailing, and no areas that appear worn down or over buffed. Look between the fork tines. An inferior product will show roughness there.

◼️ Style. Flatware designs fall into three categories: Modern, which is sleek and streamlined with little or no pattern. Traditional, which often features floral designs, ornate flourishes and fiddleback or curved outlines. And decorative, where handles incorporate textures such as hammered, stippled or woven effects, or colored, non-metallic handles, which tend to be less durable. Pick something you won't get tired of. That said, Liberty offers an affinity line with fun motifs that feature skulls (a hit with the biker set), Celtic heritage and Woodstock (a hippie flashback).

◼️ Finish. Today's flatware comes with polished, brushed or ornate finishes. The smoother the finish and the simpler the pattern, the more it will show fingerprints, dings and scratches, "and that's not necessarily bad," Owens said. Patterned flatware is more forgiving.

◼️ Size. Flatware size falls into two general camps: American Standard and European. American standard flatware is typically an inch smaller than European-size pieces. For example, an American Standard fork measures about seven inches, while its European counterpart measures eight inches. Though some U.S. consumers still prefer traditional American sizing, the trend is toward less ornate, larger and heavier pieces, known in the industry as Euro-sizing. The only way to know what you like best is to try before you buy.

Because there's more to this story, join me next week when my husband and I test drive four flatware sets and discover, and sometimes disagree on, their finer points.