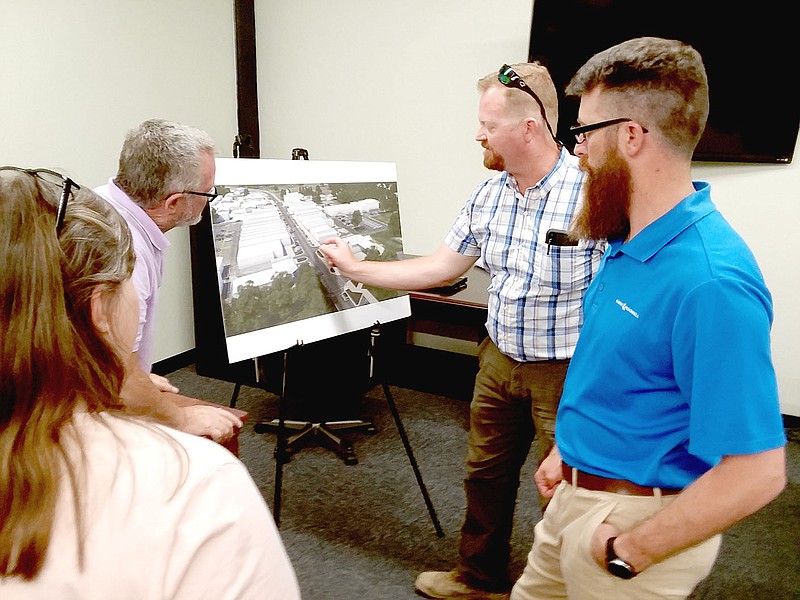 The purpose of the meeting was to present preliminary plans and take public input regarding a multimillion dollar project intended to enhance the downtown shopping district over the course of the next year.

Engineer William Pattengill and project manager Steven Beam from the firm of Burns and McDonnell, of Springdale, which is overseeing the project, provided detailed explanations for various construction components contained within the scope of the project.

According to a May newsletter published by the city, downtown renovations will include installation of drainage tiles along Buchanan Street, replacement of water lines, new streets, wider sidewalks, new sidewalks to the west, and additional green space and landscaping. The main drain lines under the existing U.S. 62B near the post office will be replaced with bigger pipes, eliminating a major bottleneck.

Beam answered questions and went through a block-by-block explanation of planned renovations. Some changes can't be made until Prairie Grove assumes ownership of U.S. 62B from the state.

Improvements will be done along Baggett, Pittman, Buchanan, Kate Smith and Mock streets. The project is expected to last eight months once work begins.

Oelrich said the speed limit coming through the downtown area will likely be reduced once the city takes over U.S. 62B.

The currently speed limit is 30 mph going through downtown, but Oelrich said the city has discussed going as low as 20 mph as part of the plan.

Wiley mentioned other changes when the transfer is complete that are intended to provide adequate parking for downtown businesses. Among these will be angled, head-in parking in front of Razorback Pizza on Buchanan Street.

The parallel parking spots will be striped to encourage drivers to park there and keep drivers from using that as a lane, according to Wiley.

Someone asked if the city was considering charging for parking in the downtown area. The answer was no, that had not been discussed in the planning.

Flooding caused by water coming off the street will be alleviated by restructuring drainage downtown. Beam said plans call for conveying the runoff underground which he predicted would vastly improve the drainage.

Some box culverts will be replaced by larger units to help prevent flooding on the road.

He noted some driveways are not well defined, but the plan accounts for any discrepancies.

"We'll try to provide a logical location for an actual 24-feet-wide two-way driveway to allow [traffic] to come in and come out," he said.

He said those improvements will help delineate traffic flow coming in and out between buildings.

Other factors taken into consideration are parades held during the Clothesline Fair and other events, and a pedestrian crossing will be installed on Buchanan Street between Neal and Mock streets so people don't have to jaywalk.