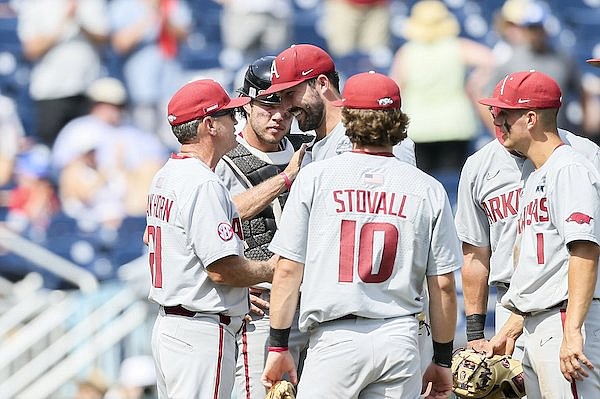 OMAHA, Neb. — Arkansas pitcher Connor Noland walked off the field Saturday to the ringing of Hog calls throughout Schwab Field.

Noland got a hug from every infielder and an attaboy from his head coach Dave Van Horn at the end of his 7 2/3-inning gem. He led the Razorbacks to a 17-2 victory over Stanford in front of an announced 24,337 in Arkansas’ first game of the 2022 College World Series.

The Razorbacks shattered their record for most runs, hits and largest margin of victory during a game at the College World Series, and set a stadium record with 21 hits.

The Razorbacks (44-19) advanced to the winners bracket of their pool in Omaha and will play Monday at 6 p.m. against Ole Miss, which defeated Auburn 5-1 on Saturday night.

Every Arkansas starting position player recorded multiple hits as the Razorbacks compiled their most hits in a game in 21 years. It was a complete role reversal from Feb. 27, when the Cardinal held the Razorbacks to three hits during a 5-0 victory in Round Rock, Texas.

"We walked out of there, limped out of there going, wow," Van Horn said. "And we thought Stanford probably doesn't think we're very good, because we didn't look very good that day."

The Razorbacks looked great in all facets in the rematch. It started on the mound as Noland allowed 2 runs, 6 hits and 1 walk, and struck out 1. He threw 55 of 79 pitches for strikes, and did not throw more than 15 pitches in an inning.

"I knew they were going to swing the bat," Noland said. "They're an aggressive team, they like to put the ball in play. We had the wind blowing in.

"I just stuck to the plan....They just put the ball in play, and I let the defense work behind me."

Arkansas had eight hits against Cardinal starter Alex Williams, a first-team All-American and the Pac-12 pitcher of the year who two days earlier said he would take Stanford’s offense over the Razorbacks’ offense “any day.”

Arkansas chased Williams during a five-run fifth inning that included a three-run home run by Chris Lanzilli to put the Razorbacks ahead 4-1. Robert Moore also scored on a wild pitch and Zack Gregory singled to score Peyton Stovall with two outs.

"Their guy beat our guy," Stanford coach David Esquer said. "That's all you ask when you come into the World Series. That has to happen, is you want your guy out there, and if he happens to beat you have to tip your cap."

The Razorbacks scored 12 runs against the Stanford bullpen, including six in the ninth against Stanford reliever Cody Jensen.

Arkansas scored 11 runs over the final three innings. Moore doubled to lead off the seventh and scored on an RBI single by Jalen Battles, and the inning included back-to-back RBI hits by Brady Slavens and Cayden Wallace with two outs.

Peyton Stovall added two-run singles in the eighth and ninth innings, and Wallace hit a two-run home run in the ninth. The ninth inning also included a two-run double by Braydon Webb.

"Those last three innings we scored...11 runs," Van Horn said. "You can take those off the board a little bit. (Stanford is) trying to get through this where we may play again."

Webb led off the top of the first inning with a triple off the right-field wall and scored on Slavens’ sacrifice fly to put Arkansas ahead 1-0. The Razorbacks threatened for more in the inning when Lanzilli was hit by a pitch and Moore walked in consecutive two-out at-bats to load the bases, but Arkansas left them loaded when Battles struck out looking.

The Razorbacks stranded 12 during the game.

Stanford tied the game 1-1 on Brock Jones’ leadoff home run in the bottom of the first. The Cardinal did not score again until after Noland walked off the mound with two outs in the eighth, when Carter Graham doubled against reliever Kole Ramage.

Ramage recorded one out in his first College World Series outing since 2018. Zebulon Vermillion pitched the ninth for the Razorbacks. Ramage and Vermillion are the first Arkansas players to be on the roster three times in Omaha.