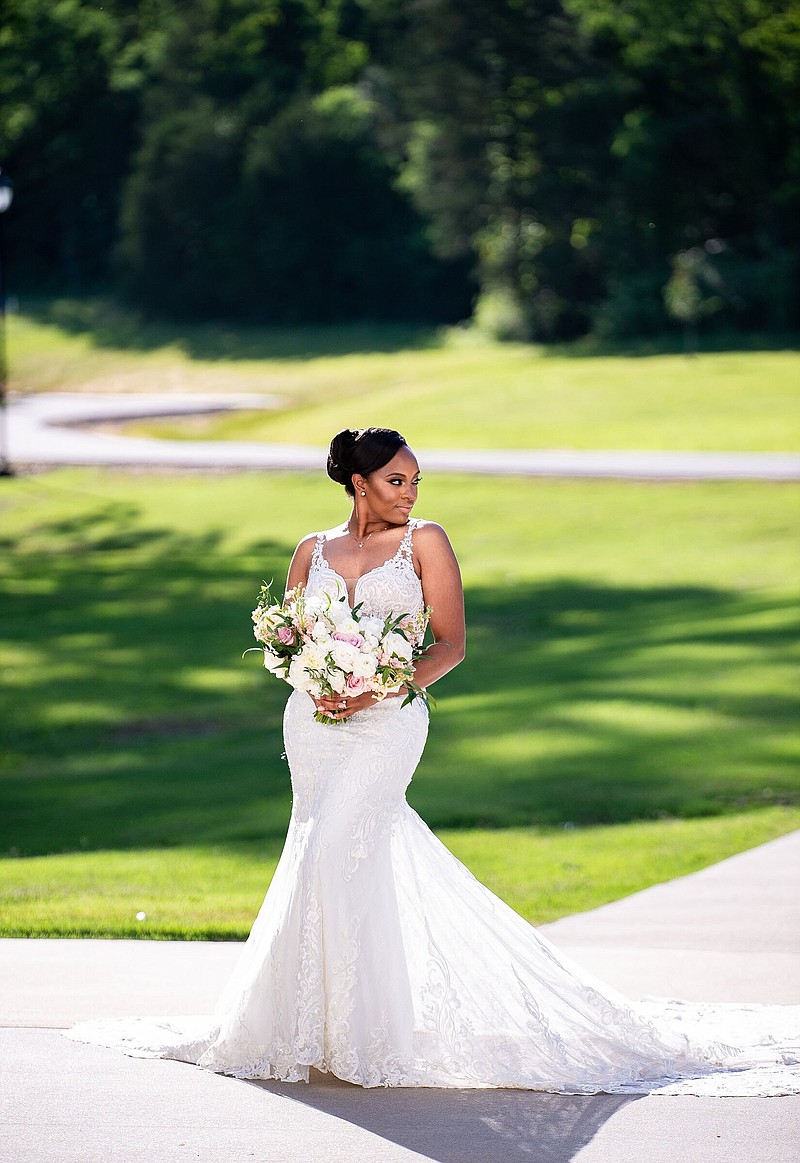 The bride is the daughter of Ernice Bryant-Blann and Earnest Blann Jr., both of Little Rock, and the granddaughter of the late Josephine and Freddie Bryant of Lexa, the late Queen Blann-Mays and the late Earnest Blann, both of Wrightsville.

Parents of the groom are Raymond Long of Palacio, Texas, and the late Jacqueline Long. His grandparents are the late Maggie and Eli Jackson of Pine Bluff and the late Josie and Charlie Long Sr. of St. Louis.

The aisle was lined on each side with runners of wedding flowers. Large windows behind the altar were framed with greenery. Music was by the Little Rock String Quartet.

The bride, who walked down the aisle with her father, wore a sleeveless mermaid-style gown embellished with lace appliques. The bodice had a V-neckline and scoop back. The skirt extended to a chapel train with a scalloped hem. She carried a bouquet of white hydrangeas, white peonies, blush spray roses and white and blush garden roses.

Serving as maid of honor was Briana Davis of Little Rock and matron of honor was Mallory Klaus of Fayetteville. Bridesmaids were Dr. Elissabeth M. Hagler of Charlotte, N.C.; Katie Kortebein of Jersey City, N.J.; Courtney Provence, Whitney Holman and Britney Young, all of Little Rock; Jasmine M. Gipson of Columbia, Mo.; Ashley Benton-Thomas of North Little Rock; Kortne Dodds of Alexander; and Kathleen Pait of Cleveland. They wore champagne gold gowns with sweetheart necklines and ruched waists. Their bouquets were a smaller version of the bridal bouquet.

Guests were seated by DeAndre Jenkins and Wendell Scales Jr., both of Little Rock; and Brandon Williams of Dallas.

A large spray of wedding flowers was over the double doors leading to a reception, also at Legacy Acres. Tables were decorated with various arrangements of hydrangeas, garden and spray roses and larkspur. The dance floor was decorated with the couple's initials in gold. Music was by the Rodney Block Collective, Bijoux and DJ Nick HUD.

The groom graduated with distinction from Philander Smith College and is chief executive officer of Big Brother Big Sisters of Central Arkansas.

The couple will live in Little Rock after a wedding trip to Punta Cana, Dominican Republic.