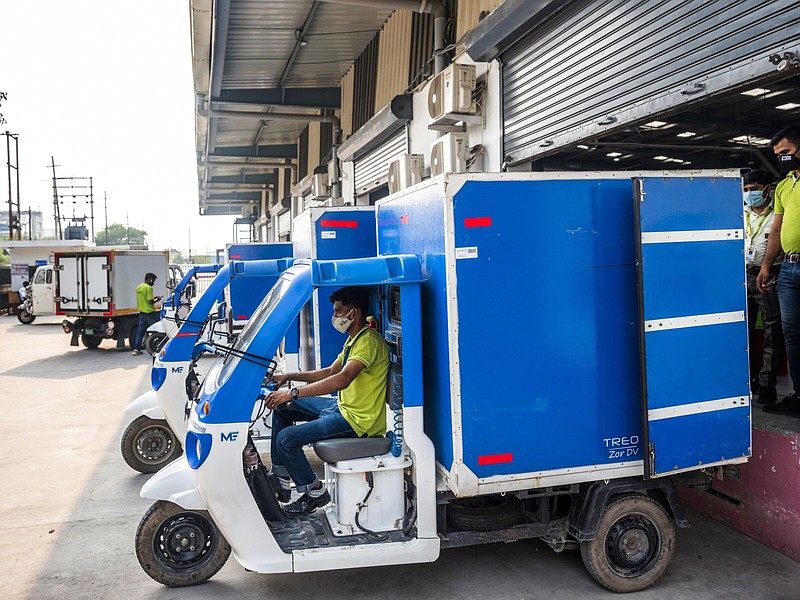 A delivery rider in a Mahindra Treo Zor electric vehicle departs a loading bay at a BigBasket warehouse in Noida, Uttar Pradesh, India. MUST CREDIT: Bloomberg photo by Prashanth Vishwanathan.

Companies in the transport sector, and automakers in particular, are among the most-visible pioneers of the inevitable shift to cleaner fuel. Electric cars are becoming a household concept, regardless of their prohibitive cost for most of humanity -- another classic case where modern technology is largely unaffordable for the poor.

That's where large fleet operators come in, according to New York-based RedBlue Capital, an early stage investor in clean mobility startups. Companies like Amazon and food delivery services such as DoorDash and Instacart will drive a faster adoption of EVs, RedBlue partners Olaf Sakkers and Prescott Watson say. Ride hailing outfits, taxis, transit buses and corporate shuttles will also play a part, considering such operators are cautious about the total cost of ownership and use the vehicles a great deal more, making the economics of EVs attractive to them.

In 2019, RedBlue invested in Zoomo, an Australian e-bike startup that supplies to food delivery services. Through bulk sales, Zoomo has already become one of the fastest-growing e-bike companies in the world, according to Watson. More recently, RedBlue invested $28 million in EVage, a supplier of light electric trucks in India.

"We should measure the success of the transition to EVs against how many miles they run, not by how many vehicles are sold to the general public," Sakkers said in an interview in Singapore recently. "For many people, EVs are just a second or third car that they hardly drive, which doesn't move the needle. But fleet operators use them many times every day."

That's particularly true for a country like India -- a nation of 1.4 billion people or one-sixth of the world's population. There, very cheap, no-frills cars made by the local units of Suzuki and Hyundai dominate. Price elasticity is so tough that Ford and GM ended up exiting, unable to sell enough cars to justify the billions of dollars in investment over many years.

In India, fleet operators are already leading the way to electrification. BigBasket, which delivers everything from groceries to cooking utensils, is on a mission to electrify 90% of its fleet. In New Delhi, people often tweet about their rides with BluSmart, a 100% electric taxi startup with almost half a million app downloads. It estimates the market will grow more than four times to $90 billion by 2030 across several Indian mega cities. Amazon and Walmart-owned retailer Flipkart are also pushing for more EVs, but the problem is they can't get enough supply.

"India has traditionally waited to localize wealthy countries' auto products once prices fall," Watson says. "But the 'wait ten years' approach doesn't work with climate timelines today and so India in particular will have to develop indigenous technologies to make EVs cheap enough for near term mass adoption. That's the opportunity we're investing in."

That's different from larger, more developed nations where cars tend to grow bigger even as utilization remains limited. Call it a car obesity problem. In America, a typical vehicle sits in the garage 96% of the time, Sakkers wrote in his book Mobility Disruption Framework, citing research by McKinsey.

But in emerging economies like India, newer concepts are gaining ground. E-scooters are selling like hotcakes and the South Asian nation is now mulling battery swapping as opposed to charging stations to ensure faster adoption of cleaner fuels.

According to BloombergNEF, the market for light-duty trucks and vans in India is growing at two to three times that of Europe or the U.S., and almost 40% of the nation's three-wheeler fleet is already electric.