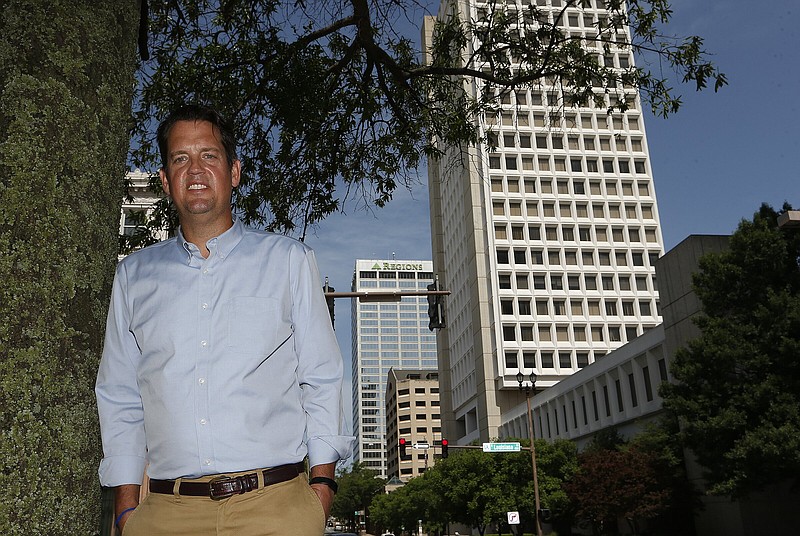 Two of downtown Little Rock's signature buildings -- aging towers at least a half-century old -- are taking on new owners and inspiring hope that the city's central business district could be in for a resurgence.

New buyers have gained control of the Bank of America and Regions Center, office towers that have been entangled in legal knots and fell into disrepair that led to disgruntled tenants. The new investments are energizing other commercial developers who operate downtown and the officials charged with promoting the city's core corridor.

Bank of America Plaza and Regions Center rest squat on Capitol Avenue, just two blocks apart, and dominate the city's silhouette along with Simmons Tower and the Stephens Inc. building.

"That's our city skyline," said Gabe Holmstrom, executive director of the Downtown Little Rock Partnership, a key marketing and promotion arm for the city center. "When you're crossing I-30 and coming into the city, that's what you see."

Regions Center is now owned by Taconic Capital Advisers, a New York hedge fund that says it plans to invest in revitalizing the tower. Bank of America Plaza was purchased by Keith Richardson, a Central Arkansas-based investor most noted for developing and managing multifamily properties through his company, Richardson Development. Richardson did not respond to inquiries for comment on his plans for the facility.

"What's interesting in what's now happening is that you have local investments coming back into an area that was created by local investment but over the years changed hands to absentee owners who had different reasons for making that investment, not all of which was for the betterment of downtown Little Rock," says Jay Chesshir, president and chief executive officer of the Little Rock Regional Chamber of Commerce.

"It's really exciting to us that local ownership and control is coming back into that central core of the financial district and even outside owners that are pledging to revitalize the area."

Even competing commercial real estate developers and management companies heavily invested in downtown are looking forward to a potential infusion of new ideas and approaches to reinvigorate the downtown core.

"This is clearly an opportunity for downtown to come back commercially," said John Flake, who has been involved in downtown development for nearly 50 years and is managing partner for the Simmons Tower across the street from Regions Center. "It can be a real bright spot again for the city – I'm very bullish on downtown."

Little Rock's central business district, like most urban downtown areas in state capital cities, has historically been home to banks, law firms, government agencies and professional-service firms that cater to state and county governments. West Little Rock and suburban markets have lured tenants from the central hub, putting pressure on building owners and their leasing partners.

"Little Rock's CBD has kind of languished in occupancies and in static rents for quite some time," said Greg Joslin, a senior broker with Colliers of Arkansas who has been involved in the downtown commercial leasing market for more than a decade. "It's been a challenging environment."

Dallas-based CBRE Group will lease and manage the Regions facility through its Little Rock office, which has been housed in the tower since 2016. The new owners are planning to feature the building's multiple amenities, including an event center on the 30th-floor with a full-service kitchen and bar that was formerly the Little Rock Club and will be open to tenants and the public.

In addition, Cromwell Architect Engineers of Little Rock has been hired to develop a mixed-use plan to generate foot traffic and attract downtown workers to the 20,000 square feet of ground-floor space, Callahan said, noting the reconfiguration could include restaurants, other food-service operations, a grocery concept and specialty services.

"That space is front and center right on Capital and Spring Street," he added. "We want to re-engage that space and figure out what is the right mix for it. The space is ideal because it is in the core of the financial district and we have thousands of people just within a few blocks. We want to make that space more of a people attractor."

There is no set budget for updating the facility though Callahan said work will start immediately to install new elevator banks.

"We finally have an ownership that wants to make 400 West Capitol the premier downtown address," Callahan said. "We recognize that it's going to be a big investment and we're definitely prepared to make it.

Downtown's woes were exacerbated three years ago when the state of Arkansas purchased the former Alltel Corp. headquarters in Riverdale. The Commerce Department and other state agencies marched out of downtown to occupy the campus on the Arkansas River.

"That left a lot of big holes to try to fill in properties that were already just trying to maintain their occupancies," Joslin added. "Getting a new injection of capital and investors for downtown can only be a great thing for the area."

Flake, now commercial real estate advisor with Flake & Co., also is investing in the future of downtown Little Rock and advocates a repositioning for development of the area.

In November, Flake and other partners plan to open a mixed-use technology center in the former home of Arkansas Power & Light's headquarters at 900 S. Louisiana St. on the southern border of downtown. Flake and his partners, James Hendren and David Payne, paid $2.8 million for the historic structure and have invested another $3.5 million to update it for tenants that will include a technology company on the top floor and a restaurant on the bottom.

"We looked at that as an opportunity to give a boost to downtown and to invest in a building that has been part of the area's history and development," Flake said. "We wanted to be a vote of confidence for real-estate development downtown."

Downtown rejuvenation also is being invigorated by a new generation of leadership at another firm that has been a key to development of the urban district for nearly 40 years, Moses Tucker. The firm was instrumental in developing the Little Rock River Market and condominiums in the area. Today, it manages and leases the Mann on Main building along with anchors on Capitol Avenue: Union Tower and the Lyon building.

Chief Executive Officer and President Chris Moses is part of a group that purchased the Arkansas Capital Commerce Center at 200 River Market Ave. last year. "We're not selling our office products in the area," Moses says. "We're doubling down."

Pumping new investments into downtown is vital but the area also needs campaigns that promote the walkability and livability of the area, according to Moses. "We're not just selling a space, it's a package of a 24-hour lifestyle that attracts millennials," Moses said. "If you're not selling that in the high-rise world, you're really just another floor plan. For our city to be successful we've got to fix the riddle of the CBD."

Likewise, Holmstrom of the downtown partnership advocates that the City of Little Rock commit to a master plan strategy, especially for the Capitol Avenue corridor. He notes such an outline hasn't been undertaken for more than 25 years. The Bank of America and Regions towers are ideal structures that could be animated with a new vision for their ground floors, which were developed to house bank lobbies.

"There are opportunities there for these new owners to add amenities and entice restaurateurs to come to that space," Holmstrom said. "It's time for something new."

Chesshir, one of the city's top economic development salesmen, also says downtown could use a novel approach to bolster its future. "It's about attracting new people and creating new uses ... and reimagining what a space could be rather than what it's always been," he said. "And if we get that piece right, we can grow what we already have here and attract other talent to this core area to grow with us."