Hornets run away with title 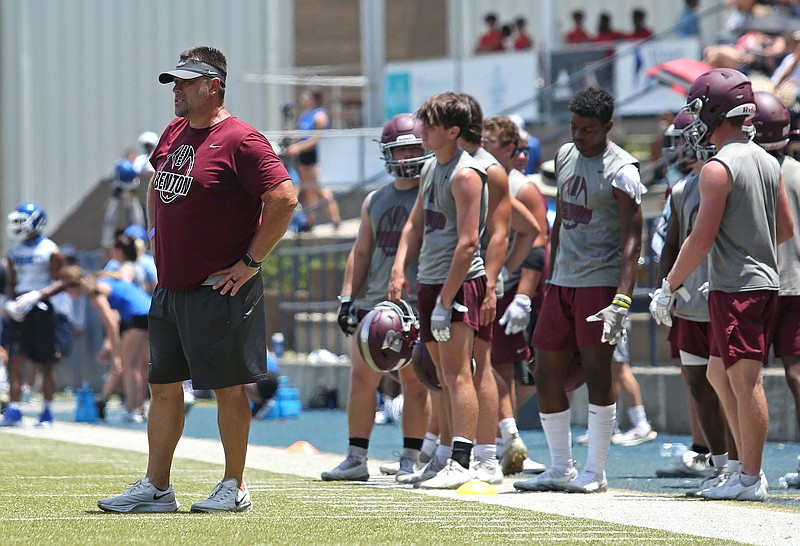 Benton Coach Brad Harris (left) watches his team play against Pulaski Academy during the 7-on-7 Shootout of the South on Friday at Pulaski Academy. Harris is getting the Panthers, last season’s 6A-East champion, ready for a move to the 6A-West Conference. (Arkansas Democrat-Gazette/Colin Murphey)

Buck James sat back and watched his team enjoy the moment -- keeping his mind focused on the future.

James' Bryant Hornets won the 2022 edition of the 7-on-7 Shootout of the South on Saturday at Pulaski Academy, defeating Conway 15-4 in the championship to cap an 8-2 record for the tournament.

James and Bryant are the four-time defending Class 7A state champions, so he won't get too excited about winning a tournament for what he calls "a different sport." The skills his team showcased, however, are what got James excited Saturday.

"To be a complete football team you have to be able to throw it as well as you run it," James said. "We've always hung our hat on running the football, but we're gonna throw it as much as we run it. It's what has gotten us to where we're at is being able to do what we need to do when we need to do it. When you gotta throw it, you gotta be able to throw it. It ain't because you have to throw it, it's because you can. I think that's the difference between teams that do it and win championships versus teams who don't."

It wasn't just the offense that impressed James. His defense was able to match the offense throughout the tournament, and its championship game performance was just what he wanted to see.

"Being able to hold [Conway] to four points in a championship game is amazing," James said. "With good football teams, you have to have a great defense, and our defense played outstanding this weekend."

Junior Kel Busby has large shoes to fill at the quarterback position for Pulaski Academy.

Charlie Fiser led the Bruins to the second-most passing yards in the nation last season, and the three-time defending Class 5A champions are turning to Busby, an Arkansas baseball recruit, to keep the offense moving.

Without Fiser, and the Arkansas-Democrat Gazette All-Arkansas Preps Player of the Year Joseph Himon, there will be pressure on Busby to bring the Bruins their 10th state championship.

Pulaski Academy Coach Anthony Lucas will turn to Busby and a trio of talented wide receivers to help carry that load.

The Bruins averaged 36 points per game throughout their eight games at the Shootout, in large part to senior receivers Tyson McCarroll and Jaylin McKinney, as well as junior John Mark Charette.

The size and leaping ability of McCarroll and Charette gave Busby consistent threats, and the speed and elusiveness of McKinney made the quarterback's job that much easier as he routinely broke away from defenders.

PA went 7-1-1 at the Shootout, falling to Bryant in the semifinals. Lucas, entering his second season as the Bruins' head coach, hopes history will again be on his side this season.

Braylen Russell, a member of the Arkansas Razorbacks' 2024 recruiting class as of June 18, got his first taste of competition with his new school.

Russell spent his sophomore season with Hot Springs Lakeside but made the move to Benton for the 2022 season. He is ranked the No. 240 player nationally, according to 247Sports and the No. 2 player in Arkansas behind Little Rock Christian's Walker White.

Russell has been with the Panthers since June 6, so he is still getting to know his teammates, coaches and maybe most importantly, the playbook.

"It has been good," Russell said. "I'm still working in it, still trying to learn all of the schemes they got."

Benton will be moving to the 6A-West Conference after winning last season's 6A-East title. But For Russell, it will be a chance to test his skills against stiffer competition after playing in the 5A-South with Lakeside last season.

"I look forward to it," Russell said. "Better competition and I got to do what I got to do to get better."

"When you get a player that moves into your district like that guy, he is a game-changer for you," Harris said. "We were going to be good running the football with the backs and line we got, but he takes us to a different type of offense. The guys that we got are solid, but he's a banger and we are excited to have him."