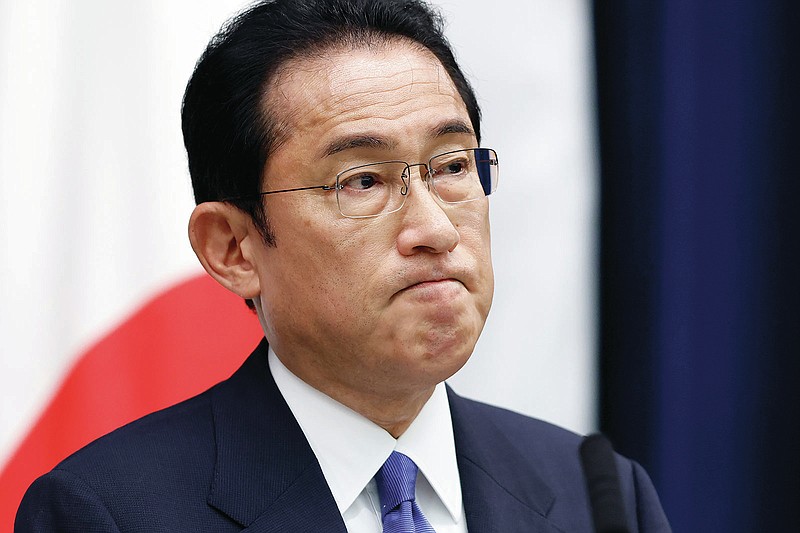 FILE - Japanese Prime Minister Fumio Kishida attends a news conference following the Quadrilateral Security Dialogue (Quad) leaders meeting at the Prime Minister's official residence in Tokyo on May 24, 2022. Kishida, despite an underwhelming start eight months ago, is enjoying surprising popularity by playing it safe as the public's worries about the coronavirus and global conflicts ease. (Kiyoshi Ota/Pool Photo via AP, File)

TOKYO -- Japanese Prime Minister Fumio Kishida did not look like he'd last long when he took office eight months ago.

He was seen as nice, but indecisive and subservient to party heavyweights. Many believed that, like his short-lived predecessor, he was not up to the task of winning over a public battered by months of pandemic restrictions and economic worries.

A recent surge in popularity, however, likely portends a victory in July elections that could set up a long stretch of uninterrupted power. That's saying something in a country where many past prime ministers had only relatively brief periods in office.

The secret to his surprising success?

By mostly playing it safe, and for the time being holding back on contentious policy goals, he has avoided the mistakes that doomed his predecessors, such as appearing autocratic and not paying attention to public opinion.

He has also been helped by an easing of public worries about the pandemic as well as growing concerns about global conflicts. The confluence of good fortune, experts say, created a public image of a steady, sensible leader with a shot at lifting Japan from decades of economic and security woes.

With his support ratings now over 60%, well above the 40% when he first took over, a strong victory for his Liberal Democratic Party in elections next month seems certain, helped by the continuing weakness of Japan's opposition. That, in turn, likely means up to three years without another election that could drive him from power.

"Because there weren't high expectations for Mr. Kishida when he launched his administration, he can be seen as stable just by doing things normally at a safe cruising speed," said Yu Uchiyama, a politics professor at the University of Tokyo. "But he cannot stay popular just by looking stable, and his success depends on whether Mr. Kishida responds flexibly to changing situations."

Several years in power would allow Kishida to focus on long-term issues such as Japan's fast-aging, fast-shrinking population, the economy and a contentious revision of the constitution, a long-cherished goal of his conservative party that is opposed by those worried that its war-renouncing Article 9 will be watered down.

Kishida's continued success depends on delivering concrete accomplishments, analysts say. Until now, his actions have mostly been responses to the pandemic and global conflicts, and he has remained vague about his policy goals.

When Kishida came to power, public support for the governing coalition had been badly hurt by his predecessor, Yoshihide Suga, who struggled with a worsening pandemic and insisted on pushing through with hosting the Tokyo Olympics despite a worried public and was out of power after only about a year.

Kishida's current high support ratings are partly a result of his tough response to Russia's invasion of Ukraine and his careful covid-19 measures, including strict border controls that foreign critics have described as xenophobia. A decline in new cases has further boosted his support, as has his announcement of a gradual reopening to foreign tourists.

As Japanese worry about growing Chinese and North Korean assertiveness in the region, he has called for a stronger alliance with Washington and for the repair of ties with South Korea, long marred by bitter tensions over historical issues such as Japan's past colonization of the Korean Peninsula.

Russia's invasion of Ukraine has increased Japanese fears that a Chinese attack on Taiwan, the self-governing island that Beijing claims as its own, could embroil Japan in a war. That has prompted a surge in support for Kishida's plan to bolster Japan's military spending and defense power.

"Ukraine today may be East Asia tomorrow," Kishida said June 10 at the Shangri-La Dialogue, an Asian security forum in Singapore.

Last week, Japan's Cabinet approved an annual policy plan calling for a drastic strengthening of defense capabilities and spending. Officials cited growing tensions over Taiwan and a commitment by NATO members to spend 2% of their gross domestic product on defense, twice as much as Japan's current military spending of just over 1% of GDP.

It calls for preemptive strike capabilities as well as the development and strengthening of space, cyber and electromagnetic defense and of unmanned weapons. That's a major shift that critics say goes beyond Japan's self-defense-only policy under its war-renouncing constitution.

In a recent commentary, the liberal-leaning Asahi newspaper warned the Kishida government against "capitalizing on the Ukraine crisis" to bolster Japan's military. Japan, with a huge national debt, can't compete militarily against China and must instead "focus on deterrence by diplomacy," it said.

Kishida, who describes himself as good listener, has avoided party infighting over divisive issues. In parliament and in news conferences, he patiently listens to tough questions, often avoiding confrontations and clear policy pronouncements.

That helps his inclusive image but blurs his own principles and policy goals.

Kishida initially called for better wealth distribution as part of his centerpiece economic policy, which he calls a "new form of capitalism," but has since shifted to a growth strategy based on greater fiscal spending, a policy backed by party heavyweights who can influence his future grip on power.

"The Kishida administration needs a powerful growth strategy and whether he can present concrete measures after the July elections will be key" to his success, said Yasuhide Yajima, chief economist at NLI Research Institute. 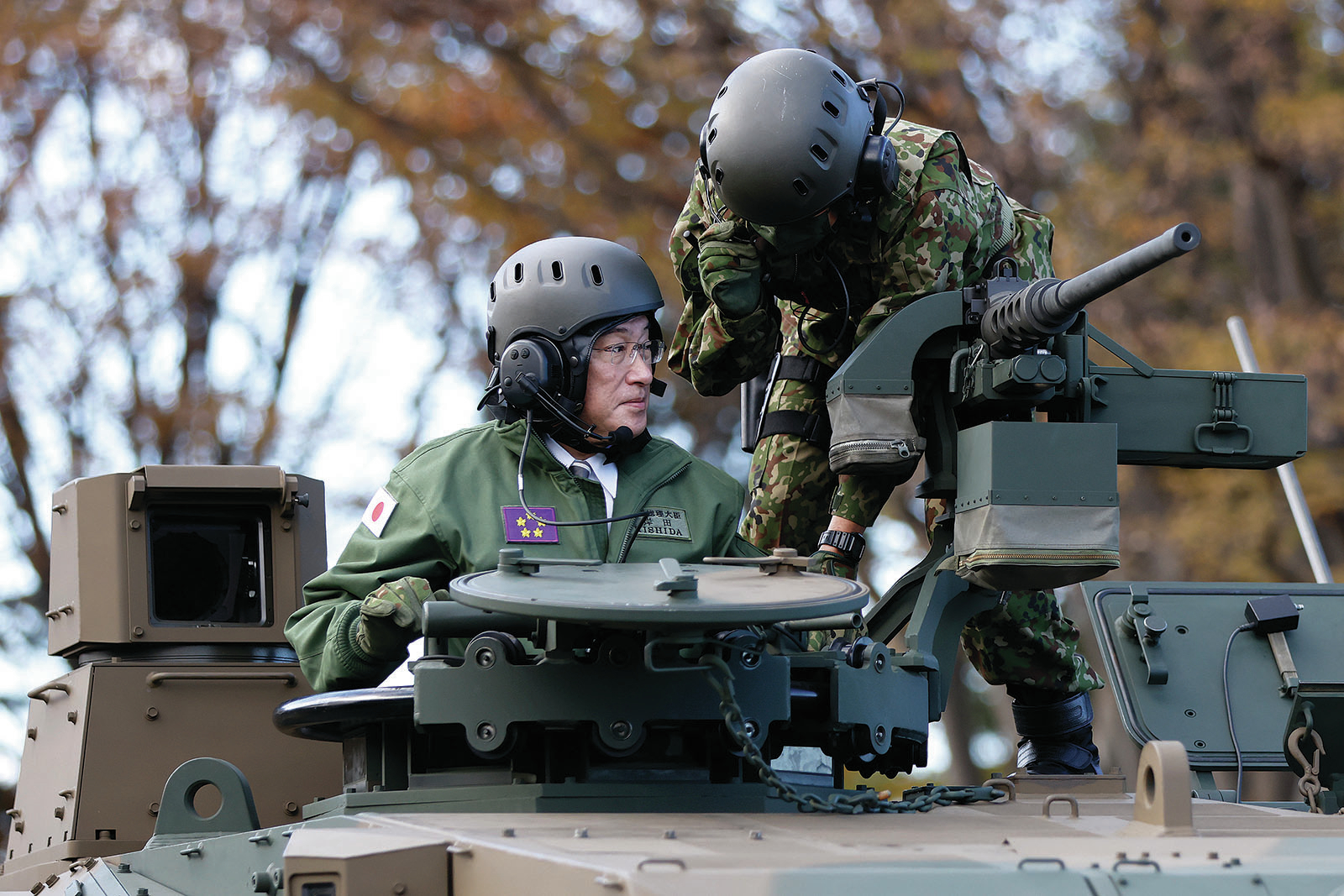 FILE - Japan's Prime Minister Fumio Kishida, left, rides on a Japan Ground Self-Defense Force (JGSDF) Type 10 tank during a review at the JGSDF Camp Asaka in Tokyo on Nov. 27, 2021. Kishida, despite an underwhelming start eight months ago, is enjoying surprising popularity by playing it safe as the public's worries about the coronavirus and global conflicts ease. (Kiyoshi Ota/Pool Photo via AP, File) 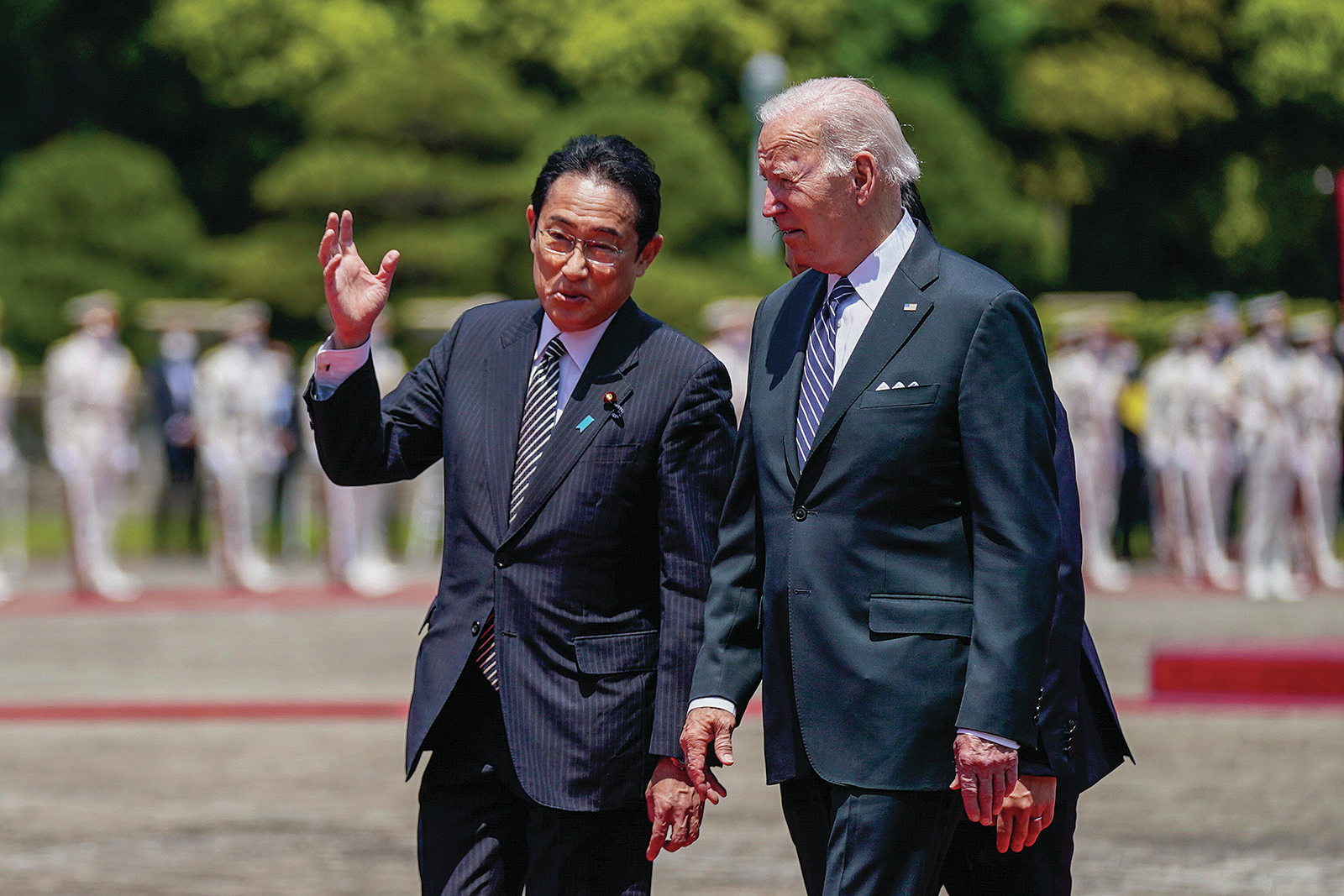 FILE - U.S. President Joe Biden, right, meets with Japanese Prime Minister Fumio Kishida at Akasaka Palace on May 23, 2022, in Tokyo. Kishida, despite an underwhelming start eight months ago, is enjoying surprising popularity by playing it safe as the public's worries about the coronavirus and global conflicts ease. (AP Photo/Evan Vucci, File) 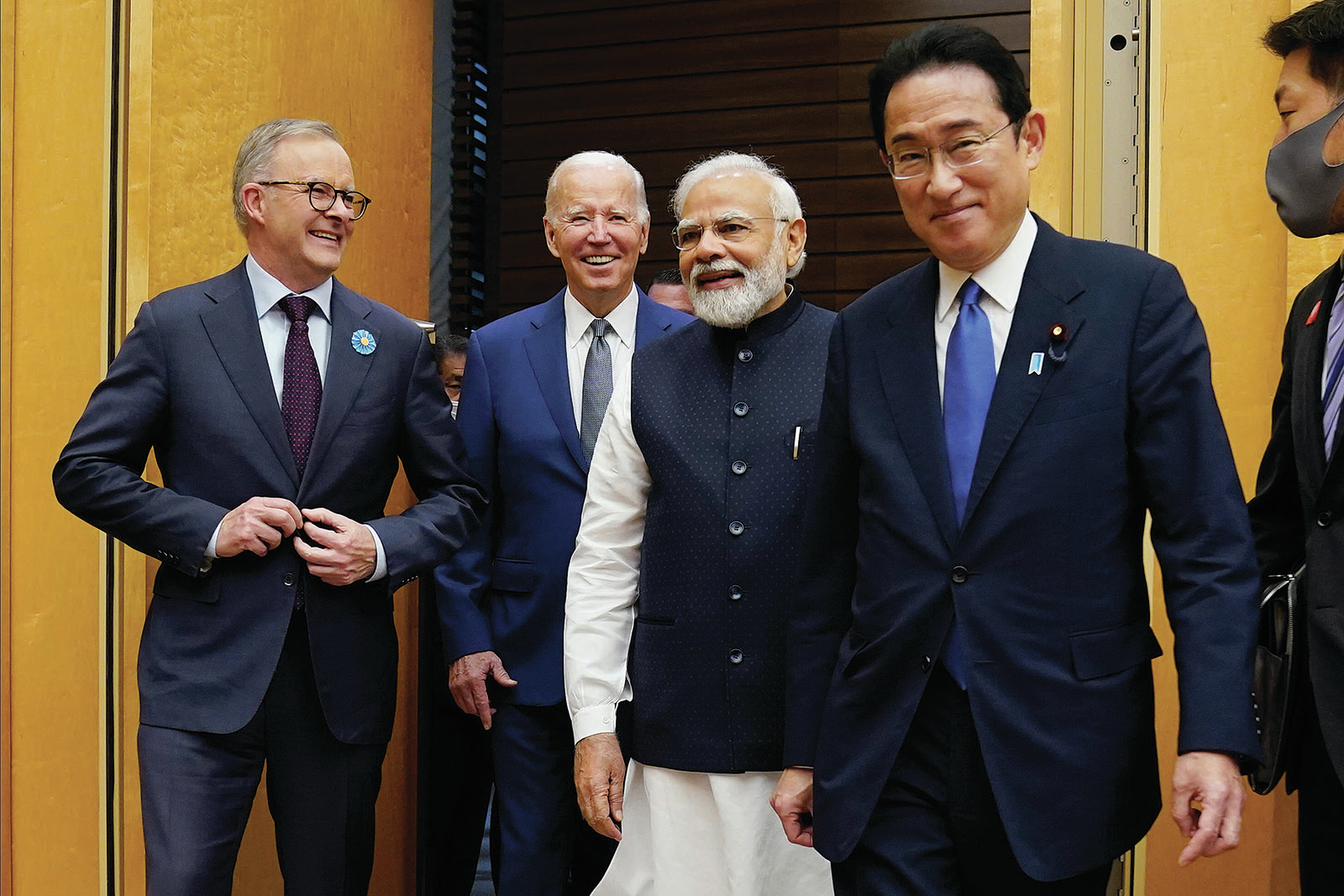 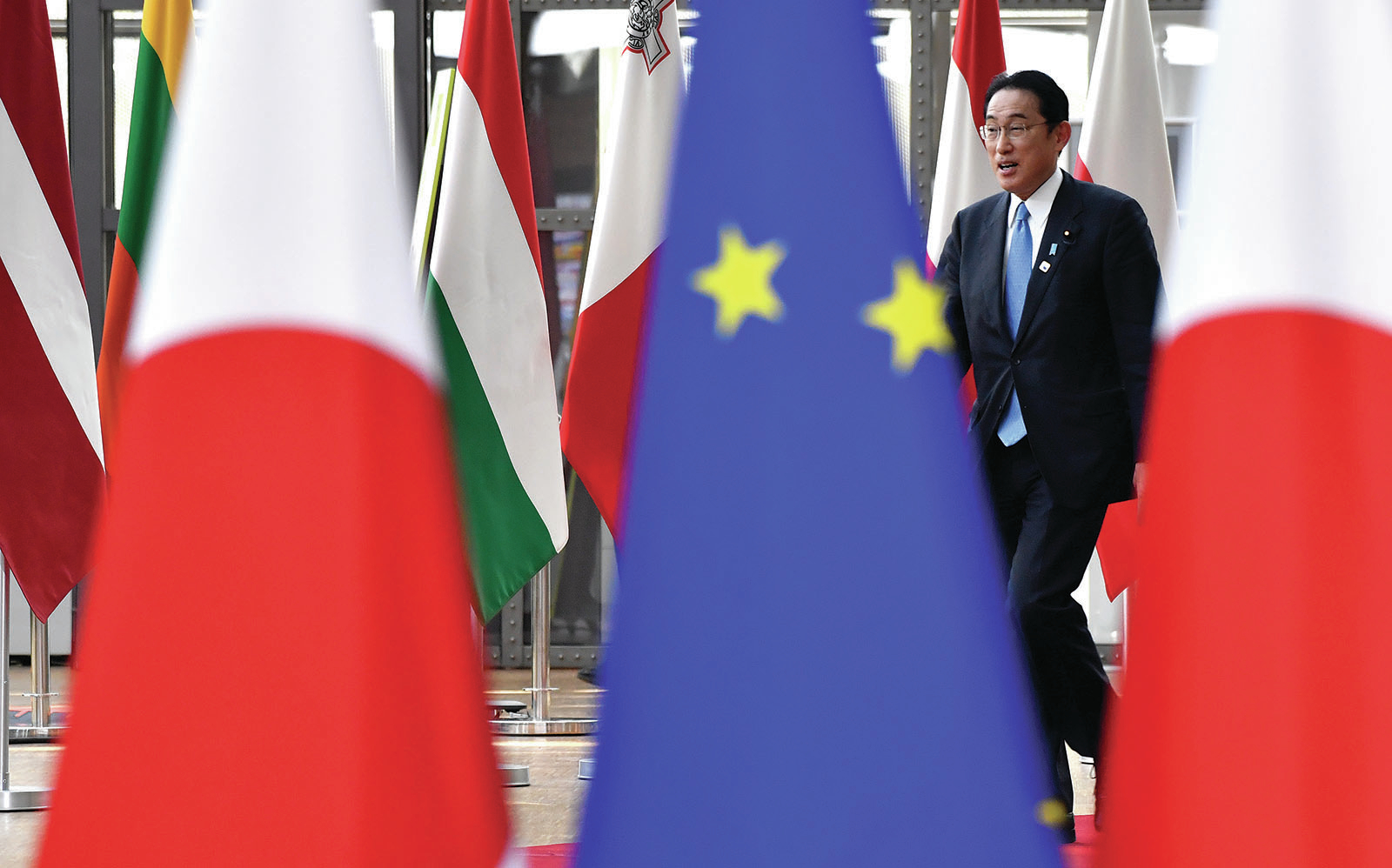 FILE - Japan's Prime Minister Fumio Kishida walks between flags prior to a meeting with European Council President Charles Michel at the European Council building in Brussels on March 24, 2022. Kishida, despite an underwhelming start eight months ago, is enjoying surprising popularity by playing it safe as the public's worries about the coronavirus and global conflicts ease. (AP Photo/Geert Vanden Wijngaert, File) 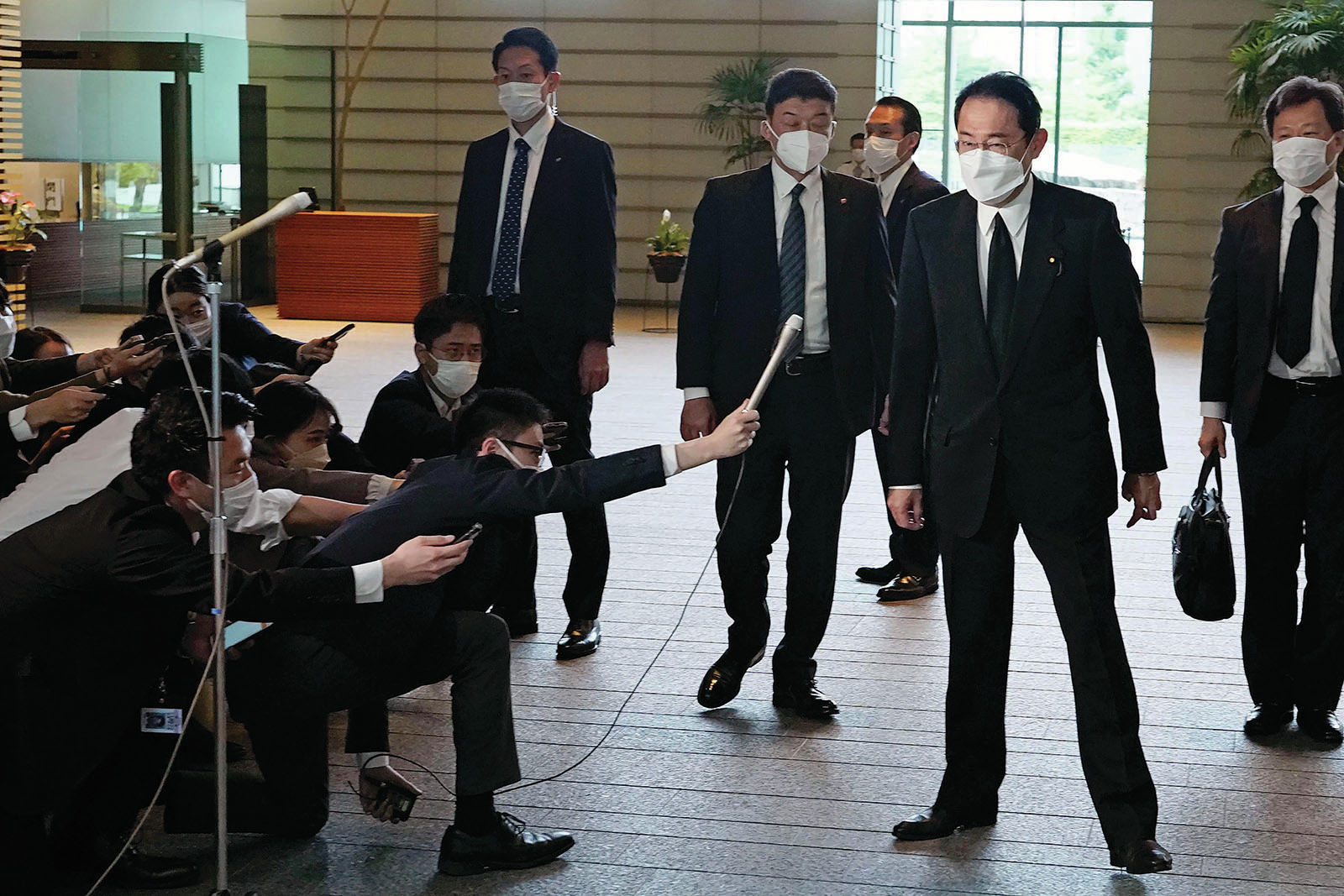 Japan's Prime Minister Fumio Kishida, second right, speaks to reporters at his office in Tokyo on June 9, 2022. Kishida, despite an underwhelming start eight months ago, is enjoying surprising popularity by playing it safe as the public's worries about the coronavirus and global conflicts ease. (Kyodo News via AP)