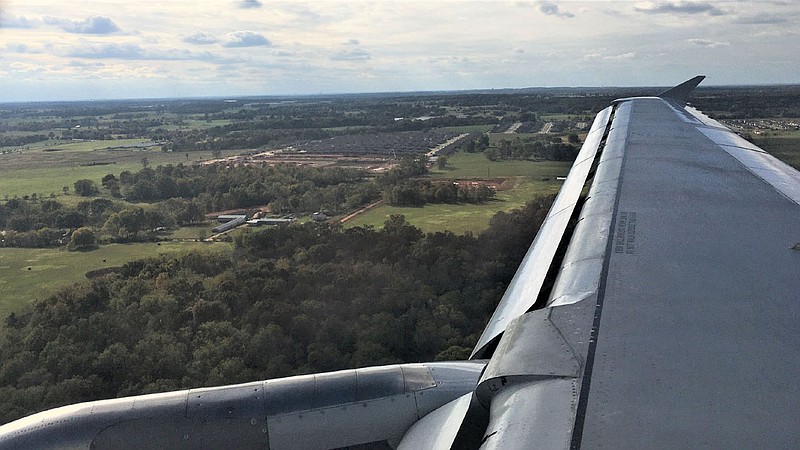 A view of the area north of the Northwest Arkansas National Airport runway from a departing airplane shows housing developments either completed or under construction. Airport officials are working on plans to address noise concerns and land use issues around the airport related to encroaching development near the airport. (Courtesy Photo/Tim Conklin, Northwest Arkansas Regional Planning Commission)

"They're not coming out this way because the airport is out here. The reason they're out here is the terrain is conducive to development," said Philip Taldo, an airport board member and Realtor. "That's why it's not all going east. You get around the lake, you get around the hills. South is the same thing. This is the most obvious place to put an airport, and it's the most obvious place to put houses."

Land near the airport grows more expensive by the day, an appraiser told airport authority board members recently.

"The prices are high. Real high. And, what we've been valuing them at is reflective of the market here but, as those sales continue to come down this way, it's going to continue to cost you more and more per acre," Stephen Cosby, an appraiser, told airport officials at a recent meeting.

Cosby said Northwest National reminds him of an airport at Savannah, Ga., that was built several years ago in what was then a rural area west of the city. Now, that airport is surrounded by development, including residential subdivisions.

"That is happening here," he said. "We're seeing it occur just over the last two years."

Cosby said a planned new road to the airport will make the area even more attractive to residential development.

"Infrastructure is a huge thing," he said.

North of the airport, Centerton is approving subdivisions at three and four lots per acre and lots are selling at $35,000 to $40,000, up from $25,000 to $30,000 in just the last couple of years. It's cheapest to buy raw land. If any improvements are made to the property by an owner or developer, such as running water and sewer lines or streets or subdividing the property into lots, those costs are typically added to the purchase price and passed on to a buyer, increasing the cost to buy the land.

"Once it gets developed with an incompatible use or just gets developed, period, it has those improvement costs that we're going to have to acquire," said Aaron Burkes, the airport's chief executive officer.

Airport officials would rather have industrial neighbors than residential because there are generally fewer noise complaints. Burkes said he has talked with several developers who are planning warehouses or other industrial projects around the airport.

"That is exactly what we want. That property sets a precedent for that zoning, and we get some of these projects very compatible with the airport," Burkes said.

Burkes said Northwest Arkansas is a seller's market, in his opinion, but plans are to continue to buy land the airport thinks it will need as it becomes available rather than exercising eminent domain -- the power of the government to take private property and convert it into public use after just compensation to the property owners.

"It really is something that's going to be incremental, acquisitions probably over a couple of decades," he said. "I think it's the least impactful on our neighbors to do it as all voluntary transactions."

Airport staff are working with their neighbors to protect the airport's interests without having to buy as much land.

Mike Johnson, airport board member from Fayetteville, said the best approach would be a combination of working with the county and the surrounding municipalities on zoning and other protections while also buying land when the opportunity presents itself.

"It has to happen now. We wait five or 10 or 15 years, we're toast," Johnson said. "The expense of buying and the hate and discontent of any additional noise becomes a tough problem."

Airport officials recently talked about ways to make sure buyers of land near the airport get fair warning of higher noise levels and any property restrictions during the sale.

To keep the noise down, touch-and-go landing practice is not allowed at night and plans were changed to shorten the maximum length of future runways. Airport officials would also like to see cities require more noise insulation in houses near the airport.

XNA officials authorized land use and noise studies in December. Airport officials say anything above 65 decibels is problematic because it's not compatible with residential areas. Officials said the Federal Aviation Administration could revisit that threshold as new planes are required to be quieter.

Normal urban areas typically have a decibel level around 55.

Bentonville is the only city with an overlay district related to the airport. The ordinance restricts or prohibits some uses of properties and imposes limitations on height, glare and lighting. Certain zones also require extra sound dampening measures and avigation easements. The stated purpose of the ordinance is to provide protection to people and property on the ground and to protect the airport from the encroachment of noncompatible land uses that may interfere with the safe operation of the airport.

"Our hope is that we can get the other municipalities to adopt something similar and protect that area," Burkes said. Centerton is where most of the new subdivisions are being added, he said.

Airport officials adopted height hazard zoning to protect the airspace around the airport, but they can't control land use on the ground.

Centerton Mayor Bill Edwards said the city and developers have a good relationship with the airport and are willing to work with the airport on noise mitigation measures and communicating with potential homebuyers.

"The projects that we've had, we've had a couple come through so far, and they have rezoned them, but we can't make the developers put an avigation easement on there. But we've asked, and the developers have been very willing to do that because they want people to know they're in a flight path, too," Edwards said. "That just protects the airport. It protects the city and lets everybody know you're in a flight path."

An avigation easement transfers certain property rights from a property owner to an airport owner including right of overflight in the airspace above or in the vicinity of a particular property. It also includes the right to create such noise or other effects as may result from the lawful operation of aircraft in such airspace and the right to remove any obstructions to such overflight. Basically, an avigation easement permits aircraft approaching an airport to fly low above private property.

Edwards said airport officials have met with Centerton, Highfill and Bentonville leaders to educate them about the airport's needs and explain what projects they have in the pipeline that may affect neighboring residents.

Mead & Hunt, the airport's longtime consultant, is working on off-airport land use planning and completing necessary noise studies now. They're expected to delineate the noisy areas around the airport including the area that would be impacted by the future second runway on the east side.

Ryk Dunkelberg with Mead & Hunt said he's found noise and land use compatibility are the biggest hindrances to any airport development. Dunkelberg has over four decades working in aviation noise mitigation planning and has received national awards for airport noise mitigation, abatement and management.

"Remember, the reason we are interested in compatible land use is to protect the health, safety and welfare of citizens living around the airport to make sure they have the quiet use and enjoyment of their property, number one," Dunkelberg said. "Number two, we want to make sure that the airport is protected so that we can develop."

Burkes said the airport has been sued over noise issues, but not in the last four years or so. He doesn't expect the streak to continue.

"We're at that precipice. We are now going to have development all around us," he said. "It's natural that it's going to happen, and this next five years is going to be dramatic." 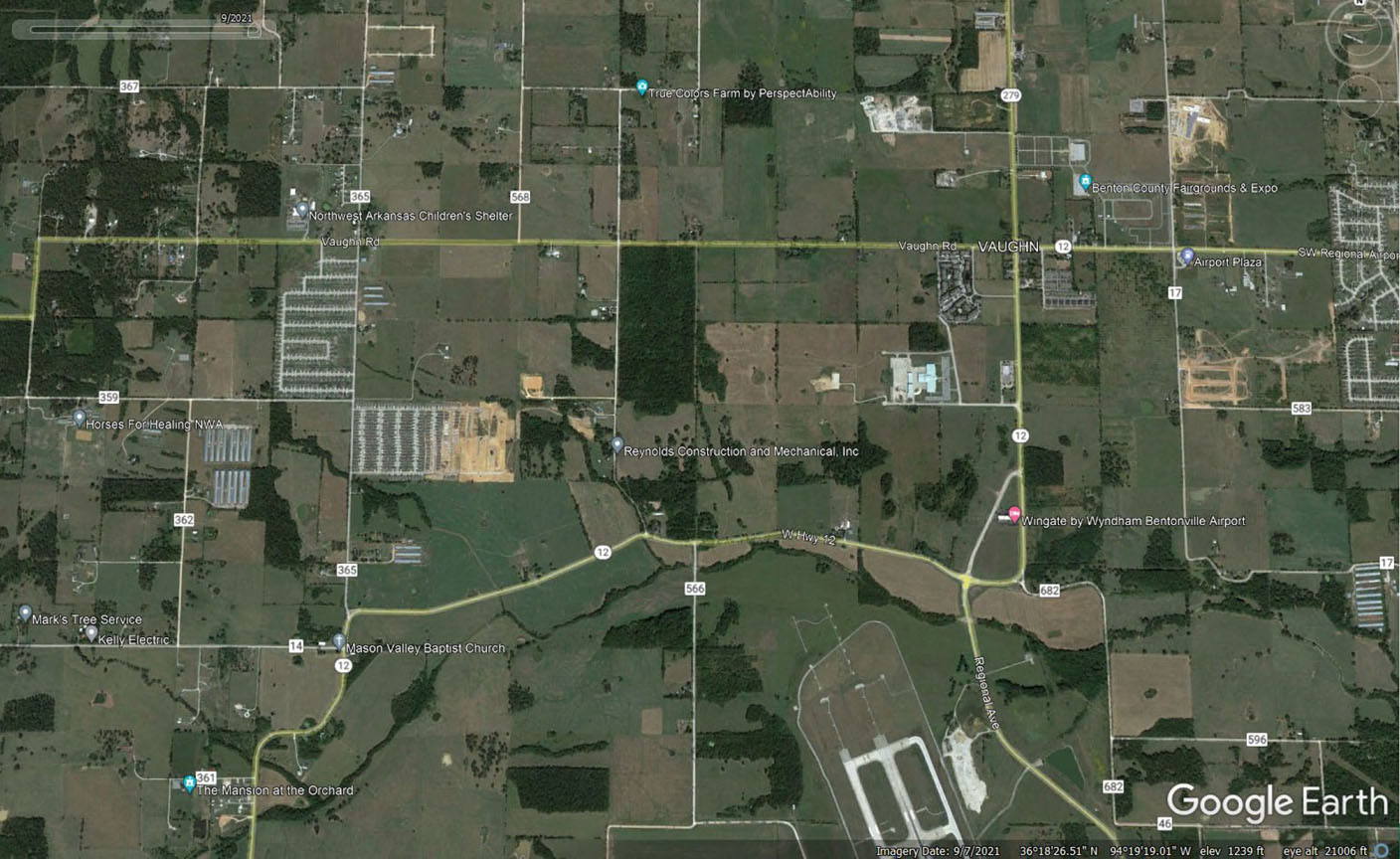 Google Earth image of the area north of the runway at the Northwest Arkansas National Airport in 2003. The airport opened in November 1998. 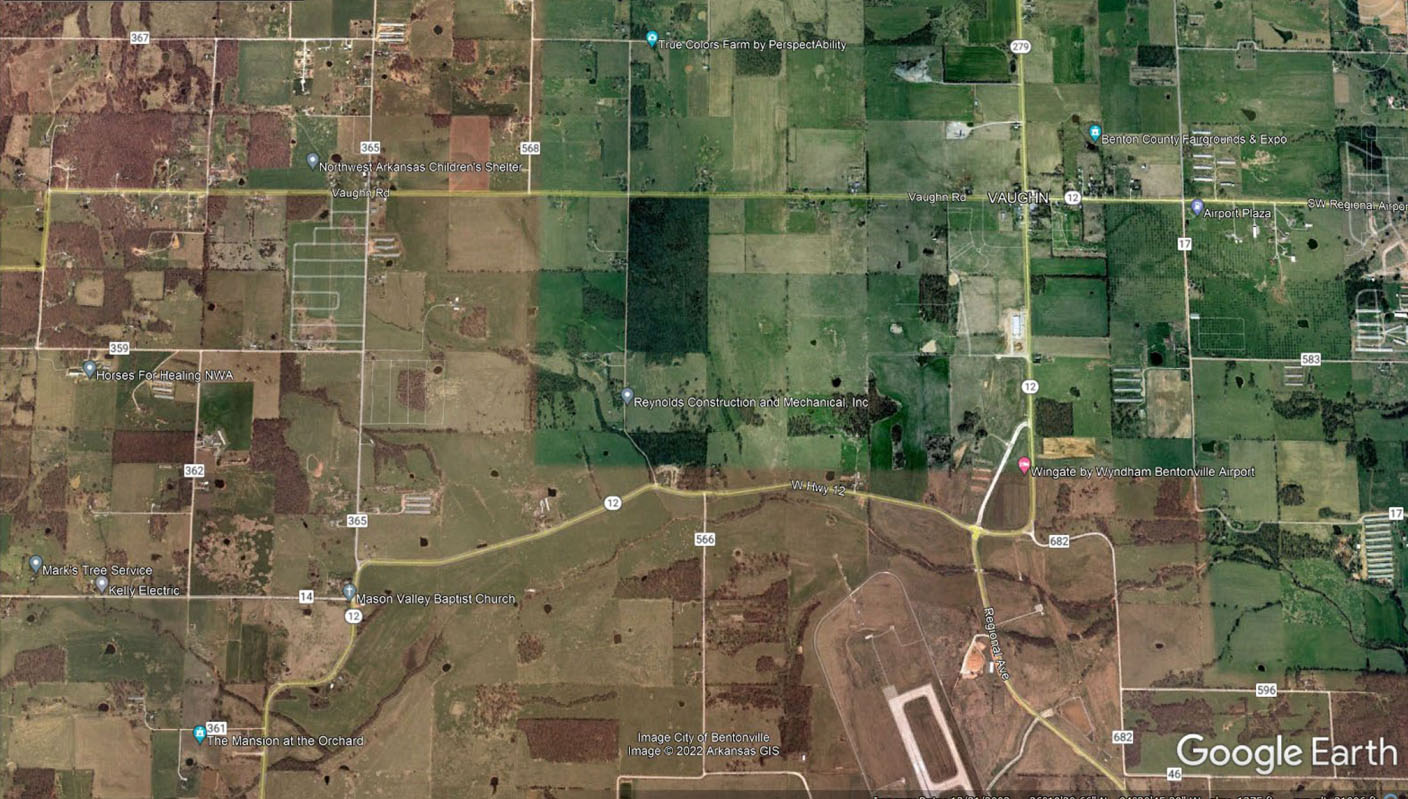 Google Earth image of the area north of the runway at the Northwest Arkansas National Airport in 2021 with a number of housing additions being built. The airport opened in November 1998.