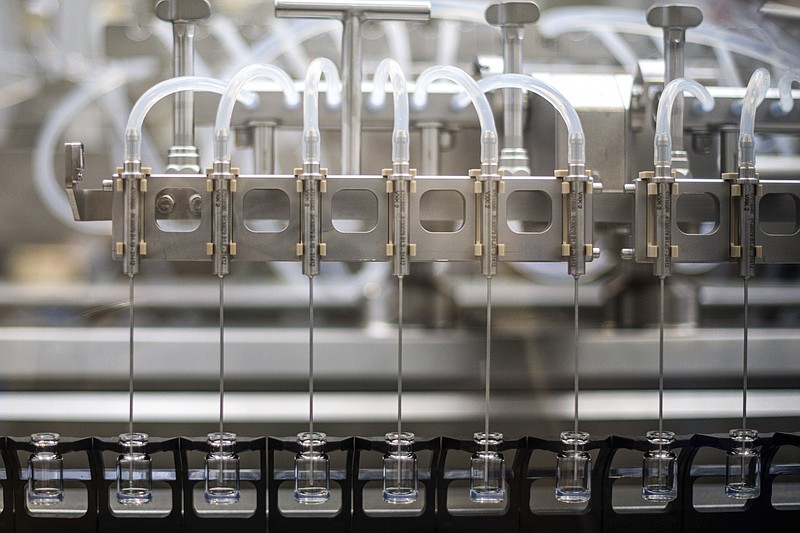 This May 2022 photo provided by Pfizer shows production of the Pfizer's COVID-19 vaccine for children under 5 in Puurs, Belgium. U.S. regulators on Friday, June 17, authorized the first COVID-19 shots for infants and preschoolers, paving the way for vaccinations to begin next week. (Pfizer via AP)

Pediatricians are preparing to administer the nation's first coronavirus vaccines for children under 5 in coming days, after the Centers for Disease Control and Prevention signed off Saturday on giving the shots to as many as 19 million children across the United States.

CDC Director Rochelle Walensky endorsed the agency's advisory panel's unanimous recommendation to vaccinate all children as young as 6 months old with one of two vaccines -- one by Moderna and the other by Pfizer and its German partner, BioNTech.

"Together, with science leading the charge, we have taken another important step forward in our nation's fight against covid-19," Walensky said in a statement. "We know millions of parents and caregivers are eager to get their young children vaccinated, and with today's decision, they can."

Doses began shipping Friday after the authorization by the Food and Drug Administration, which found both vaccines to be safe and effective.

The conclusion of this long, deliberate regulatory process, with the final signature from Walensky coming at the start of the busy summer travel season, will be a welcome relief for families who have seen the lack of vaccination among children as a major obstacle to intergenerational gatherings. Health officials plan to ramp up public campaigns to encourage vaccination as a still-underutilized weapon against the ongoing pandemic.

Pediatricians who placed orders two weeks ago are expecting doses to arrive as early as Monday. Some eager parents are scouring for appointments for toddlers who may have never seen the inside of a grocery store. The Biden administration plans to set up pop-up clinics at children's museums and libraries.

"This is an opportunity which one doesn't get very often to participate in preventing the death of children, of young children," said panel member Beth Bell, a global health professor at the University of Washington, after a two-day meeting that concluded Saturday.

Oliver Brooks, chief medical officer at Watts Healthcare Corp. who also serves on the panel, said parents and families need to be prepared for future coronavirus variants because the virus is not going to disappear. "We don't know what's coming," Brooks said. "But I feel comfortable in saying that vaccinating will be a benefit."

Parents, in consultation with pediatricians, will have to make a decision about which vaccine to obtain. The website, vaccines.gov, lists pharmacies and health-care providers administering the vaccine.

The two newly approved vaccines employ different dosages, a different number of shots and different intervals between shots. Regulators are not favoring one over the other, CDC official Sara Oliver said. Either vaccine is better than no vaccine, she told the CDC's Advisory Committee on Immunization Practices.

Panel members raised many concerns and questions from pediatricians and families, including whether children who were previously infected with the coronavirus should get the shots.

Roughly three out of four children carry antibodies showing that they have already been infected at least once with the coronavirus, according to research published earlier this year. The CDC emphasized that children who have had the virus should still be vaccinated to protect against reinfection -- as well as to protect their family members and communities.

"We know that we are also not good at predicting which children are going to unfortunately have severe or even potentially fatal outcomes with a [coronavirus] infection," Oliver said Saturday. Vaccination is the safest way to gain broad protection against current and future variants, she said.

The coronavirus vaccines can be given at the same time as other vaccines, including on the same day, or any time before or after another vaccine, Oliver said.

The clinical trials involved thousands of children during the omicron variant wave this past winter. Side-effects from vaccinations were minimal -- pain at the injection site being the most common -- and were comparable to what is seen in other pediatric vaccines.

Even though deaths in young children are relatively uncommon compared with adults, covid-19 is a leading cause of death among children and adolescents, including 1- to 4-year-old children, according to the CDC. Medical professionals emphasized during the CDC advisory panel meeting that the disease is serious enough among young people that it should be treated as a risk similar to other diseases that kids are routinely vaccinated for.

"These very clear data should just decimate the myth that this infection is not life-threatening in this age group," panel member Sarah Long, a pediatrics and infectious-disease expert at Drexel University, said Friday.

"All children 6 months and older should be immunized against [covid-19]," Long said Saturday.

Vaccines reach patients only after a multi-step process that includes clinical trials and FDA review, which culminated Friday. A critical final step comes from the CDC, which, after hearing from its advisers, decides on how to use vaccines.

This final green light for pediatric vaccines from the CDC completes a historic scientific and regulatory effort that began in early 2020 as vaccine makers raced to develop a tool for fighting the novel coronavirus.

The first shots went into the arms of health care workers in December 2020, and over the course of the next year the majority of the population was vaccinated. Regulators approved boosters as well for older people and those with vulnerabilities.

But the youngest group -- 6 months to under 5 years old -- had been left out of the vaccination campaign until now, pending research to show that the vaccines are safe and effective and, most critically, worth recommending for babies and small children who are least likely to have a severe case of covid-19.

Although most children with covid-19 recover uneventfully, data presented to the CDC panel Friday made clear that this highly contagious virus has managed to sicken thousands of children who were too young until now to get vaccinated. Children 6 months to 4 years currently have higher rates of emergency room visits and hospitalizations for covid-19 than older children, and more than half of the hospitalized younger children have no underlying medical conditions, according to CDC data.

The virus has killed more than a million people in the United States, the highest death toll of any nation during the pandemic. Vaccinations have helped drive down the infection fatality rate, as have therapeutics, including antivirals.

In recent months, coronavirus subvariants with mutations that evade the neutralizing effects of antibodies from vaccines or previous infection have rolled across the country, and government officials are debating whether and when to reformulate vaccines to better match new strains of the virus.

For now, the newly approved vaccines are the same as they've been all along, with the difference being that the youngest kids will get much smaller doses.

Millions of parents with babies and young children have waited for these shots they view as essential to resuming indoor playdates, birthday parties and other gatherings with families and friends.

During the panel's public comment session Friday, Caitlin Komm, a special-education teacher, said her 2½-year-old had never been inside a grocery store or a museum and was learning about the world through books. She said her daughter told her that some day she wanted to go to an aquarium like Curious George. The little girl also gives her stuffed animals coronavirus tests and says, "Don't worry, Mama, coronavirus test is negative," Komm said.

The impact on child care has been particularly tough. A Kaiser Family Foundation Survey found that parents of children under 5, younger parents, Black and Hispanic parents, and parents with lower household incomes were more likely to report job disruptions because of child-care needs than parents of older children, White parents and higher-income households.

Experts predict the initial vaccine uptake will be modest, with many parents choosing a wait-and-see approach. Another recent Kaiser Family Foundation survey found only 18% said they plan to get their children vaccinated right away, while 27% said they will "definitely not" get their child vaccinated.

States began ordering the vaccines from the federal government two weeks ago. When the deadline for preorders closed Tuesday, states had ordered 3.8 million doses from the 10 million doses of Pfizer and Moderna initially available, according to a spokesman for the Department of Health and Human Services.

Every state except Florida preordered doses. The Florida health department said in a statement Thursday that it was not participating in the "convoluted vaccine distribution process." The department does not recommend pediatric coronavirus vaccine for healthy children, the statement said -- a policy that goes against CDC guidance. On Friday, after the FDA authorization and public criticism of the state's decision not to preorder doses, Florida health officials told pediatricians that they were able to place orders for the newly authorized vaccines.

The two vaccines use the same technology but differ in key ways.

The Pfizer-BioNTech vaccine, for children 6 months through 4 years, is three shots of 3 micrograms each -- one-tenth the adult dose -- with the third shot given at least two months after the second shot. Preliminary data suggested the vaccine's efficacy against symptomatic illness is 80%. But that estimate was based on 10 covid-19 cases.

Among the youngest children in the clinical trials, there was not enough data to make a definitive estimate of the benefit against severe disease, but researchers believe that all signs point to the vaccines helping this age group in the same way they have in older groups.

Pediatricians and immunization advocates said many medical offices are trying to figure out what vaccine to order because they don't want to carry both brands to avoid making mistakes because one requires three shots and the other, only two. They are also worried about wasting doses. Some doctors and parents may prefer to get the two shots of Moderna because of convenience, with protection kicking in sooner than the Pfizer-BioNTech three-dose series.

Jason Terk, a Keller, Texas, pediatrician, said he is "leaning toward" Moderna. The three-shot Pfizer series may be a challenge except for the "few highly motivated families who really want to get it," he said in an email last week.

But he said Moderna is associated with a higher rate of fevers that are mild to moderate and "may be a tougher sell for many families who mostly doubt the seriousness of the risk of covid in this population."

Rob Weiss, a Sarasota, Fla., pediatrician, said he wasn't able to preorder either vaccine. Even after receiving an email from the state health department Friday with directions to order the vaccine online, Weiss said he went to the website and "there was no place where you can place an order."

"It's preposterous. We've been waiting for vaccine," Weiss said. Even if he is able to order doses this week, "it's going to be a significant delay in children in Florida getting vaccine."

Holly Chesnoff is among the parents in Weiss' practice who have been eagerly awaiting the shots for her youngest child, 2-year-old Sydney.

"We would be first in line, honestly," said Chesnoff, a Sarasota educator. She, her husband and their 8-year-old daughter have been vaccinated; Chesnoff has also been boosted because she takes immune-suppressing drugs for her rheumatoid arthritis.

Getting Sydney vaccinated would not only protect and bring peace of mind, but Chesnoff feels it's part of a broader obligation to protect their community. She's frustrated that parents in Florida will have to wait longer for shots.

"For all the talk about parental rights, I should have the right to access something that's approved," she said.