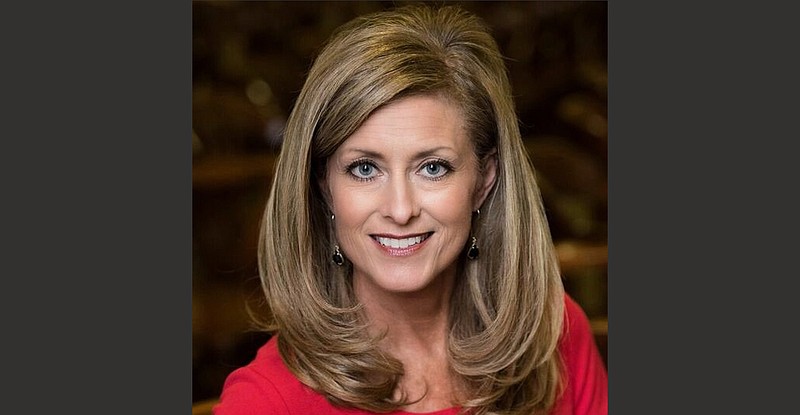 Amy Fecher is shown in this photo. (Special to the Arkansas Democrat-Gazette)

Without a vote to spare, state Department of Transformation and Shared Services Secretary Amy Fecher was hired by the trustees of the Arkansas Public Employees Retirement System as its new executive director earlier this month, system records show.

Seven trustees voted for Fecher's appointment, while four trustees voted against her appointment and two trustees abstained, the system's records revealed in a response to the Arkansas Democrat-Gazette's request under the Arkansas Freedom of Information Act for any correspondence relating to the trustees' votes on June 1 to hire Fecher.

The trustees voted to hire Fecher in a voice vote to lead state government's second-largest retirement system, which has more than $10 billion in investments and more than 75,000 working and retired members. She will start work on July 1 with a starting salary of $165,396 a year.

In interviews after the divided vote, two trustees said they voted against Fecher because she lacked a financial degree. Another trustee said he voted against her because he favored another candidate with investment experience.

At least a few trustees could be heard during the June 1 meeting dissenting from the vote to hire Fecher. But it wasn't clear how many trustees dissented because none of the trustees asked for a roll call vote and board Chairwoman Candace Franks didn't ask if any trustees abstained from the vote before they departed from the meeting.

In a text to Pulley on June 2, Arkansas Municipal League Executive Director Mark Hayes wrote "I tried to push you through, but i think it came down to politics like [Duncan] Baird's appointment.

"You'd have been perfect. The system stinks sometimes," Hayes wrote in his text to Pulley obtained by this newspaper under the Arkansas Freedom of Information Act.

Trustee Larry Walther, secretary of the state Department of Finance and Administration, declined to comment about the text, said Scott Hardin, a finance department spokesman.

Baird, who is a former Republican state representative from Lowell, departed the system on April 9 to begin work as senior manager of benefit services at Walmart where he is responsible for administering Walmart's 401 (k) plan.

According to system records provided by interim system director Allison Woods in response to the Arkansas Freedom of Information Act request, the seven trustees who voted to select Fecher were:

• Retired Alma Police Chief Russell White, who is the chief of police at the Northwest Arkansas National Airport.

According to the records provided by Woods, the four trustees who voted against selecting Fecher included:

Wilson and Wallace are both appointees of Senate President Pro Tempore Jimmy Hickey, R-Texarkana. Carnahan is an appointee of Hutchinson. As state auditor, Lea serves on the system's board under state law.

Trustee Jason Brady, who is chief deputy state treasurer for operations, and Franks, who is the state's retired bank commissioner, both abstained from the vote, according to the records provided by Woods.

Brady serves on the board as the representative of Republican state Treasurer Dennis Milligan of Benton. The state treasurer serves on the board under state law. Earlier this month, Brady said that he abstained from voting on hiring Fecher because one of the treasurer's office employees was a candidate for executive director.

Franks, who is an appointee of Hutchinson, said last week that she typically doesn't vote as the board's chairman unless she has to vote to break a tie, but "I think the board made a good decision."

After the trustees selected Fecher, Hutchinson said earlier this month that "This was a decision made by the board independently and I applaud their diligence in the selection process."

On Thursday, Hickey said Thursday that he didn't indicate his preference for either Wallace or Wilson.

Asked about the trustees' selection of Fecher, Hickey, who is among her legislative critics, said Thursday, "I don't have any comment."

Shepherd said Thursday in a written statement that "I did not contact any of my appointees to the APERS Board of Trustees regarding the Executive Director position.

"As with the many actions of our boards and commissions, I trust members make decisions in the best interest of the state of Arkansas," Shepherd said.

Fecher, who has a bachelor's degree in physical science from the University of Central Arkansas, has been secretary of the state Department of Transformation and Shared Services since 2019.

She also served as the state's chief transformation officer from 2016-2019, executive vice president for the Arkansas Economic Development Commission from 2015-2019 and director of the Department of Rural Services in 2015 under Hutchinson, according to her resume. She worked as assistant director in Gov. Mike Huckabee's office from 2000-2001, deputy director of the Department of Rural Services from 2001-2005 and as legislative consultant and liaison for state officials for the Hutchinson Group consulting firm from 2005-2007, her resume states.

The job description for the retirement system executive director post calls for minimum education and/or experience that includes a bachelor's degree in business administration, accounting, finance, economics, public administration or a related field and five years of executive experience reporting directly to corporate or public leadership, including three years in a supervisory or managerial capacity.

Woods said in an email dated April 22 to the five trustees on the selection committee that if any of the 21 applicants for the job did not meet at least one component of the three components of the minimum requirements, they would be determined to not have met the overall minimum requirements.

"For the degree requirement, which mentions a related field, we accepted any field of study as long as they had earned a degree," she said.

Acting as a spokesman for Walther, who served as chairman of the trustees' selection committee, Hardin said Thursday in a written statement that "The decision by APERS staff to allow any bachelor's degree to proceed (in combination with the other requirements) provided the selection committee the discretion to determine whether a degree was within a related field as there was not a formal list of related degrees.

"While a bachelor's degree may be required for positions throughout state government, it is not uncommon for hiring officials to have discretion regarding the type of degree," he said.

Hardin said that Walther indicated that nine applicants were determined to meet requirements based on information provided to him by the system's staff, and the selection committee on April 28 chose four candidates for an interview.

The selection committee include Walther, Bassett, Carnahan, Wilson and Lea.

Earlier this month, Wilson said he voted against hiring Fecher because "we had a disagreement on a technical issue.

"Amy meets a lot of requirements. We all know that," he said.

But Wilson said that "the way that they were written there was a disagreement" about whether the bachelor's degree needs to be in business administration, accounting, finance, economics, public administration or a related field.

Lea said earlier this month that she voted against selecting Fecher because Fecher's bachelor's degree "is in science and not finance and the other candidates all had financial backgrounds and degrees."

But Carnahan said last week that "to me, that was not a hardline rule" for the executive director to have a bachelor's degree in a finance-related field.

While he said he voted against hiring Fecher as the system's executive director, he said that "I was really voting for one of the other candidates," whom he declined to identify.

"She is very strong in having a good understanding of working with the legislative process, and the governor's office and and also managed government agencies," Carnahan aid. "We are all 110 % behind her and will do everything we can to work with her."

White said he voted to select Fecher as the system's executive director because he felt like she was the best choice for the position.

He said Fecher -- who has experience in dealing with lawmakers regarding legislation and will reach out to the system's members at town hall meetings -- and one of the candidates with financial investment experience, whom he declined to identify, had the best interviews for the job.

"Nobody said the governor wanted her for the job."