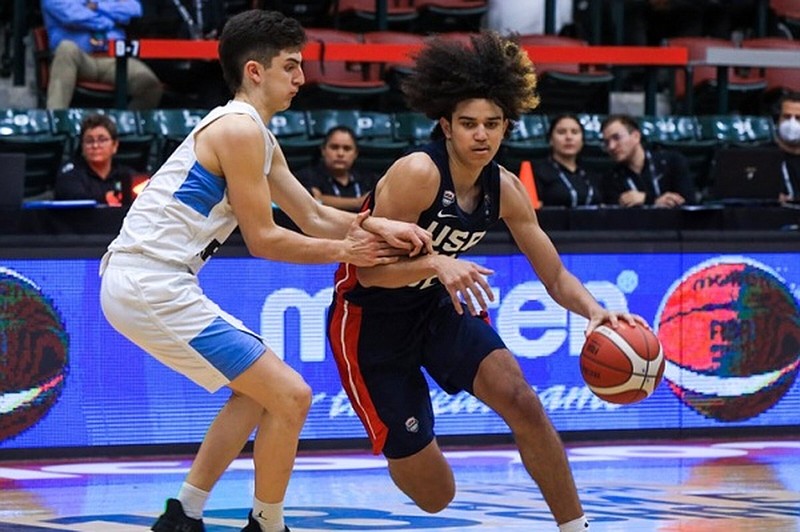 Arkansas signee Anthony Black (right) dribbles for Team USA against Argentina during the semifinals of the FIBA Under-18 Americas Championship on June 11 in Tijuana, Mexico. The Americans won that game 98-60 and then defeated Brazil 102-60 in the championship game the following day. (Photo courtesy of FIBA)

FAYETTEVILLE -- University of Arkansas freshman Anthony Black missed the Razorbacks' first eight summer workouts, but he had an excused absence.

Black arrived a little late to the Arkansas campus because he was helping Team USA win the gold medal at the FIBA Under-18 Americas Championship.

The tournament, played between June 6-12 in Tijuana, Mexico, featured teams with players who are 18 years old or younger.

Kel'el Ware, a 7-0 forward from North Little Rock who will be a freshman at Oregon, was a USA teammate of Black's and averaged 15.7 points and 6.8 rebounds.

"It's one of my great disappointments so far is not going to Tijuana and getting a good burrito down there and watching AB play," Razorbacks Coach Eric Musselman said. "But we watched [all of the games] on live stream. And I've talked to several of the coaches that were there with him."

When Musselman was Nevada's coach for four seasons before coming to Arkansas, he coached in the Mountain West Conference along with Rice.

"Leon Rice, who I know really well from Boise State, he shared some great stories about AB in huddles and in practice and then some stuff in Tijuana that kind of shed some light on how he was interacting with those guys," Musselman said.

Black's first practice with the Razorbacks was Thursday, and he made an immediate positive impression.

"Athletic, rebounding, all that. Being a versatile point guard is very good."

After Black joined the Razorbacks, Musselman said he didn't play as if it was his first practice with a new team.

"He comes in and literally knew almost our entire playbook that we put in, so far," Musselman said. "Kind of speechless because I've gone through it all the time in the minor leagues, where guys are shuffling back and forth between the parent team and the minor-league team [and don't know the plays].

"But he literally was asking about third and fourth options on the plays, and we've got some guys that have been here since Day 1 that are still trying to figure out the second option.

"And he was like, 'Hey, on that weak-side, what's the third and fourth option? What's the read on that 3-man coming off the 4 down pin on the 50 set?'

"I was like, 'Wow.' Almost like a quarterback room. That's what I thought I was in. I thought I was with an NFL veteran QB who was asking questions and had just missed a couple of OTAs or something."