Bluesman Davis was icon in state 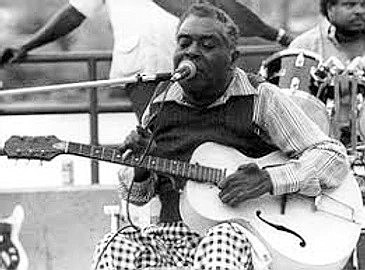 Ellis CeDell Davis was one of the most resilient and uniquely talented blues artists to ever hail from Arkansas. (Special to The Commercial/www.bmansbluesreport.com, ExplorePineBluff.com)

Ellis CeDell Davis was born June 9, 1926, in Helena, Ark., to Johnny and Mary Davis. His mother was a cook and a faith healer, while his father ran a local juke joint.

When Davis was 4 years old, he went to live with relatives on the E.M. Hood plantation near Tunica, Miss. While there, Davis showed an early affinity for both musical instruments and the blues. He first learned to play the diddley-bow (a single string of baling wire tensioned between two nails on a board over a glass bottle). By 7, he and his friend Isaiah Ross had moved on to the harmonica and guitar.

When he was 9 years old, Davis suffered a bout of polio that left him partially paralyzed. After two years of battling the disease, he could only walk with the use of crutches and had limited control of his hands.

Davis refused to give up playing the guitar and started the arduous process of relearning and rethinking how he played the guitar since he could no longer play conventionally. In an interview with New York Times critic Robert Palmer, Davis said, "I was right-handed, but I couldn't use my right hand, so I had to turn the guitar around; I play left-handed now. But I still needed something to slide with, and my mother had these knives, a set of silverware, and I kinda swiped one of 'em."

The process of relearning guitar took Davis three years, but in that time he had developed his unique style of playing slide guitar using a butter knife as the slide. According to Davis, "Almost everything that you could do with your hands, I could do it with the knife. It's all in the way you handle it. Drag, slide, push it up and down."

Davis began making a living by performing in juke joints and on street corners around Helena when he was just 14. During this time, Helena was a bustling port city that attracted some of Arkansas' best blues musicians, such as Robert Lockwood Jr., Sonny Boy Williamson and Roosevelt Sykes. Davis played with many of these musicians and even appeared on "King Biscuit Time" with Williamson and "Bright Star Flour" with Robert Nighthawk, two live blues radio shows on Helena's KFFA.

He and Nighthawk, a fellow slide guitarist, hit it off. The two worked together from 1953 to 1963.

In 1957, Davis was further disabled when the bar's panicked patrons trampled him after a fight broke out in the East St. Louis bar where he was playing. Davis was hospitalized for months and was completely wheelchair-bound after that incident.

An interview for the 1984 documentary "Blues Back Home" sheds light on Davis' resilient will and refusal to give up performing even after this life-altering experience. In the interview, Davis stated, "Whether I could walk or not, I had to make my place in this world, and find my own way, and I found it."

In 1961, Davis moved to Pine Bluff, where he lived for the next few decades. He made his first recordings in 1976 for the journalist and folklorist Louis Guida for her 1983 blues compilation album "Keep It to Yourself: Arkansas Blues Volume 1, Solo Performances."

Over the next few years, Davis released "The Horror of it All, the CeDell Davis Album" and a greatest-hits collection with Mississippi's Fat Possum Records. Davis became a regular on the national and international blues circuit, touring with musicians like Peter Buck from R.E.M. and Barrett Martin, the drummer from Screaming Trees. Buck and Martin were also a part of Davis' studio band when he recorded his 2002 album "When Lightnin' Struck the Pine."

In 2005, Davis suffered a stroke that no longer allowed him to play guitar. Nonetheless, he continued to sing, record and tour with the help of his backing band, Brethren. He released two more albums, 2015's "Last Man Standing" and 2016's "Even the Devil Gets the Blues," recorded in Seattle with Mike McCready of Pearl Jam.