‘Carnival-themed’ food offerings ahead for Malco Lounge in Hot Springs 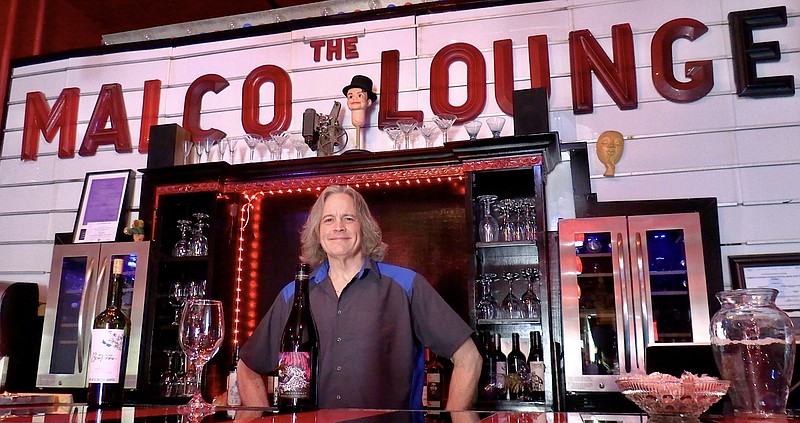 Bar manager for the Malco Lounge, Will Roddenberry, stands behind the bar ready to serve. - Photo by Donald Cross of The Sentinel-Record

After opening a year and a half ago as a lounge bar inside the historic Malco Theatre, the Malco Lounge will soon add a new food menu to its offerings.

The lounge, which opens every day but Sunday at 5 p.m., currently features a full beer, wine and soft drinks concession.

Will Roddenberry, bar manager, and Brian Townley, Malco general manager, said they are excited about the new menu coming up. Just weeks into his new position after serving as chef at The Vault, Townley said the new menu will feature a "carnival theme," with such offerings as sandwiches on a doughnut, stuffed corn dogs, and old-fashioned burgers and ham and cheese sandwiches.

"Nothing too heavy, just to kind of take a play on some of the carnival foods and make them our own," he said. "It's not going to be real fancy but it's going to be some good stuff for sure. ... Just stuff like that -- little fun stuff."

The additions will join an already hefty array of drinks to offer, many of which are unique to Arkansas.

Roddenberry, who comes from a background richly steeped in the food and drink business, as his parents opened the famed Rod's Pizza Cellar nearly 50 years ago, said they have all of the domestic beers people are accustomed to, as well as some "wonderful" microbrews that are out of Little Rock, Ireland, Oregon and a few other places.

"The wines are mostly California," he said. "But we offer like a sauvignon blanc from New Zealand and a really nice riesling from Austria. And then we've got a Rose from France, and then some wonderful Secco, which is like Champagne."

He said people love to order the wines, but as far as what is most popular among the beers, he said it is about 50-50.

[Video not showing up above? Click here to watch » youtube.com/watch?v=WYx0pBGyw48/]

"Half the people want your domestics that they're accustomed to, and the other half, they either pick a microbrew that they're used to, or people want to try local beers when they travel. And then we have some really good ciders made in Northwest Arkansas from a black apple company -- made with Arkansas Black apples. And then we have Scarlet Letter seltzers," he said.

Townley and Roddenberry noted it is still unclear when the food menu will be available, but hope it is sooner than later.

In keeping with its somewhat mysterious air of disposition, Roddenberry said many people still do not know the lounge is there. Located right next to the 290-seat historic Malco Theatre on the corner of Central Avenue and Chapel Street -- the same site which once hosted the Princess Theatre that showed silent films and vaudeville acts in the early 1900s -- Maxwell Blade renovated the lounge in early 2020.

Blade, who performs his six-day-a-week magic show in the theater, formerly used the spot as a museum of oddities. Known as Maxwell Blade's Odditorium and Curiosities Museum, it closed after five years in operation, two of which were at the theater. Much of the items from the museum, however, were able to stay.

Townley and Roddenberry described the lounge's ambience as "eclectic" and "magical." The walls are adorned with Blade's original paintings, which are for sale, Roddenberry noted, and items from Blade's personal collection line the shelves and other areas of the room.

"Pretty eclectic group of pieces -- everything from Indonesian marionettes, to the Gene Autry cap gun, to the African Art pieces to -- I mean, you name it, the guy's got it. He owns everything from a suit of armor to an old Corvette. If you're ever looking for something, don't buy it. Call me and I'll talk to Max. He's probably got it," Roddenberry said, laughing.

The project also added a smaller, more intimate, second soundstage in the back, which holds 50 people and hosts a variety of live performances. It features an "open mic" night every Thursday night.

"We've done it for about 10 weeks and it's going really well, he said. "Nice crowd of people, so you see really, really talented local musicians."

Looking to the future, Roddenberry said he wants to open up the entire lounge, where it is currently sectioned in two pieces, and make it one big room.

"I want to put the stage and the marquee to the very back of the room, where we can have music shows, concerts, seat more people -- where it's not split up the way it is now. We'll have more options," he said.