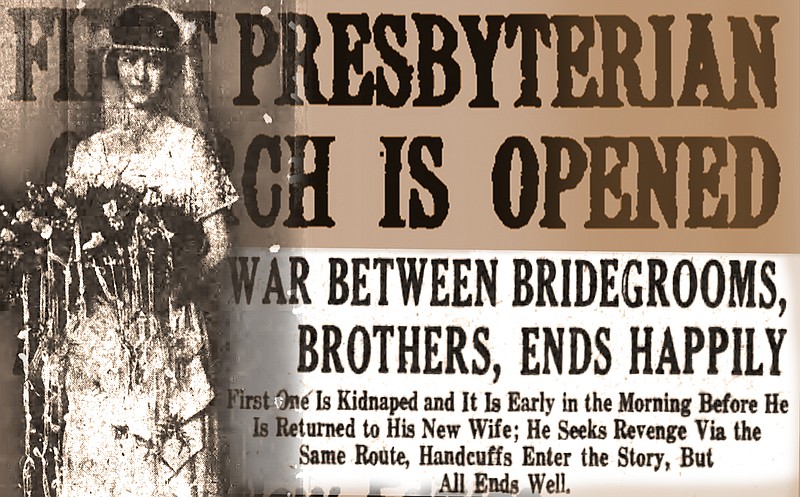 With a sweet face and arms full of ribbons and flowers, she smiles across a century from the pages of the Arkansas Gazette. She isn't looking at us.

Her expression suggests amused endurance or suppressed merriment aimed at someone off to her left and out of the frame.

The muddy photo coveys a sense of lively lightness. She might wink, self-pixelate and disappear.

But in that moment caught and held by print, the former Miss Anne Breckinridge Greenwood stands full length before us. Besides an elfin smile, she has upright posture, witchy-looking white boots and a stylish 1920s mid-calf gown. We can tell it's her wedding gown because there's a veil attached to the wide band around her noggin, and the caption underneath her photo presents "Mrs. James Caswell Wilson."

She was the first woman married in (now historic) First Presbyterian Church at Eighth and Scott streets in downtown Little Rock, and the first to march the sanctuary aisle accompanied by the city's oldest congregation's then-new organ.

If you have ever seated yourself in the quietly English gothic sanctuary of First Pres, you've felt the cool of its brick and stone and watched an otherworldly light that gleams through warping, handmade stained-glass windows. And so you might want to hear in your mind's ear a marvelously subtle pipe organ, and you might want to think you can see Anne's wedding as it unfolded at 9 p.m. June 15, 1922.

Don't. The light was quite different in 1922, and the sound was as well, because Anne walked to a different pipe organ than the one in the church today.

From a Sandwiching in History tour led by Rachel Silva in 2016 we know that when the building was completed in 1921 at a cost comparable to $4.9 million, the sanctuary windows contained clear glass. Today's stained marvels came along in the late 1920s. (Read the tour script at arkansasonline.com/620church. See an inflation calculator at arkansasonline.com/620ouch/.)

"The church was lovely in its simple decorations of palms and smilax with tall white tapers against the green background."

And then in came the bridal party, first six ushers and then six maids or matrons in organdy gowns. Each woman carried a large bouquet of Shasta daisies, and each gown was a different color of the rainbow: turquoise on Mary Louise Walker, yellow on Mrs. E.L. Flanagan, pink on Kathleen Kavanaugh, lavender on Josephine Gaunt, peach pink on Harriet Costin and green for Mrs. W.M. McRae.

The bride's mother was her matron of honor. Mom wore white Spanish lace over white satin and carried pink roses.

Then came the only daughter of Mr. and Mrs. Charles Whitelsey Greenwood, with her father. Cotnam described "a beautiful gown of white satin crepe, made with a long court train hanging from the shoulders and held in place with pearl medallions. Her long veil came to the end of her train and fell from a bandeau of pearls.

"Her bouquet was of white rosebuds and lilies of the valley, and her only ornament was a pearl necklace, an heirloom in the family and worn by brides of many generations."

The wedding marches, Cotnam noted, were the first ever played on the "splendid new organ." Although the church as designed by John Parks Almand was completed and its sanctuary opened for Sunday worship in October 1921, until James and Anne, weddings among the 789-member congregation were held in parents' homes, the minister's parlor or the church education building, as they had been since 1916, when the gorgeous old 1869 church at Capitol Avenue and Scott Street was demolished. (Money from the land sale paid for the new church.)

After their lovely daughter's wedding, the Greenwoods tastefully entertained the bridal party and their immediate families at their home on South Spring Street ... so, 13 people plus their dates or spouses, the groom's family and maybe the minister and his wife. Let's say 40 guests.

The newlyweds' new home was at 316 W. 22nd St. On July 7, they took a three-week honeymoon trip to attend a banking convention in Portland, Ore., and visit national parks and California.

In years to come, they left Arkansas and wound up in New Jersey. Anne's husband, James, was chairman of the board and president of First Bank and Trust of Perth Amboy, N.J. When he died at age 70 in 1958, they had three sons and four grandchildren.

Anne lived to be 94. In 1994, she was buried beside James at Fairview Cemetery in New Jersey.

Another lifelong marriage began at Little Rock on June 15, 1922, that of Ethel O'Bryan and William A. Schmand Jr.

This couple exchanged vows before family and friends at the bride's parents' home, 2500 Battery St.

Bernice Bogart was maid of honor; Pauline Power of Conway and Mildred Morgan of Pine Bluff were maids; little Helen O'Bryan was flower girl ("little" was the honorific title Cotnam bestowed upon all flower children); Charles Carlin was best man, and Kenneth O'Bryan and Carroll Johnson of Morrilton were groomsmen. The Rev. Philip Cone Fletcher of First Methodist Church performed the ritual.

Also in attendance was the groom's brother, George.

Several weeks before this happy day, George himself had stood before the minister hand in hand with a young woman and intending to live happily ever after, starting with that night.

But shortly after the ceremony, William and some buddies induced him to step away from his new wife for "just a moment." The June 18 Arkansas Democrat reported that the fellas then hustled poor George into an automobile and spirited him away.

They didn't return George to his bride until the next day.

George vowed revenge. He arrived at Williams' wedding with a few kidnappers of his own in tow.

But William was prepared.

As soon as his ceremony ended, he produced a pair of handcuffs and latched himself to Ethel. In the next triumphant moment, all the other guests were laughing at George and his crew.

The Democrat reported, "It was such a good joke on the kidnappers that they left the wedding party unable to bear the humiliation of defeat, William thought. But later they returned. That time they brought with them another pair of handcuffs, a pair to which William did not have the key ..."

Deftly, they handcuffed William to Ethel and refused to hand over the key.

All the guests hung around, waiting and waiting to see what would happen. The hour grew so late that finally something just had to be done about it. So, Mr. and Mrs. Bill Schmand clambered into an automobile and started for the police station, where an obliging policeman released them.

William Schmand Jr. was vice president of the Schmand Candy Co., and the couple were active in civic and church organizations. He died in 1936 after a brief illness. He was 34. Brother George died the next year.

Ethel lived to be 91 and never remarried. Bill, Ethel, George and several of their relatives are buried in Oakland and Fraternal Historic Cemetery at Little Rock.