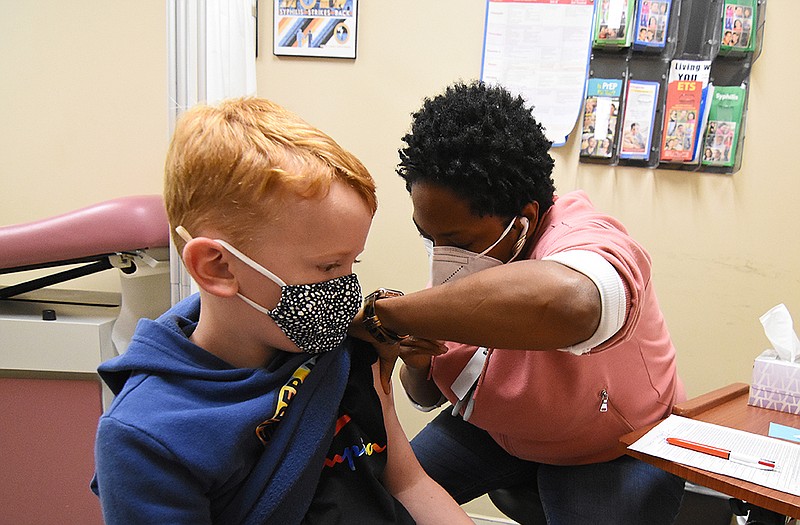 Arkansas' first coronavirus vaccine doses for children under 5 began arriving in the state on Monday, and by the end of the day, some parents had been able to get the shots for their kids.

Cory Grummer took her 4-year-old daughter, Lane, to Kavanaugh Pharmacy in Little Rock to get the Moderna vaccine after hearing from a friend that the store had it.

"They said that she was the first kid under 5 that they had vaccinated," Grummer said.

"She didn't bat an eyelash, and they gave her a bunch of candy and she was happy."

Dr. Joel Tumlison, the state Department of Health's medical director for immunizations, said 13 of the 23 vaccine shipments that were in the state's initial two orders had arrived by Monday afternoon, and another was expected later Monday.

Four more shipments are expected today. The state hadn't received an expected delivery date on the other five shipments, but Tumlison was hopeful they would arrive by the end of the week.

"Frankly, it's gotten here faster to many places than we thought it might," he said.

The first wave of deliveries, consisting of 15,000 each of the Pfizer and Moderna vaccines, are going to nine of the Health Department's local health units that will distribute them to other health units as well as private clinics and pharmacies.

The second wave, with 3,100 doses of mostly Pfizer vaccine, includes some shipments that will go directly to hospitals and pharmacies.

The second wave was initially expected sometime between Thursday and June 29, but some of those shipments are now expected to arrive today, Tumlison said.

By the afternoon, it had administered the shots to three or four children, she said.

"The parents that were getting [their children] vaccinated, they were ready," Pace said.

"I think they've been ready for a while, so they were anxious to get it going."

State and federal laws don't allow pharmacists to vaccinate children younger than 3, so Grummer wasn't able to get her 1-year-old son vaccinated on Monday.

She said she plans to take him to the doctor to get it once the doctor has doses available.

Without the protection of the vaccines, she said her youngest children haven't been able to do things like go to friends' indoor birthday parties, visit the Museum of Discovery or eat indoors in restaurants.

"We've just been really careful this whole time, and we feel like getting to the point where we can protect the littlest ones in our family its a step closer to the end for us," Grummer said.

Lane, who got a Paw Patrol Band-Aid, said the shot wasn't too bad.

Dr. Rochelle Walensky, director of U.S. Centers for Disease Control and Prevention, on Saturday endorsed an advisory committee's recommendation that all eligible children receive a vaccine.

Tumlison said it will probably be late today or Wednesday before many providers start administering doses.

To get the vaccine at a local health unit, people should call ahead to make sure the unit has doses available and to make an appointment, although walk-ins are also accepted, Health Department spokeswoman Danyelle McNeill said.

Arkansas Children's, which will offer Pfizer vaccine at its primary care clinics around the state, expects to receive its first doses later this week, spokeswoman Hilary DeMillo said.

CHI St. Vincent expects to receive its first shipment of vaccine for children younger than 5 "within the next few days," spokeswoman Bonnie Ward said in an emailed statement.

"The vaccine will be available through the ministry's pediatric healthcare providers," Ward said.

"Parents interested in having their children age five and under receive the vaccine should contact their child's pediatrician to schedule an appointment."

Baptist Health plans to offer the vaccine in its clinics "that currently provide other immunizations for children in that age group," spokeswoman Cara Wade said in an email.

"As far as timing, we anticipate hearing more about vaccine distribution from the Arkansas Department of Health," she said.

She added that the vaccine "continues to be our best defense against COVID-19."

"For parents who have questions about getting their children vaccinated, we recommend talking to your pediatrician or primary care provider, who are trusted with other aspects of guidance for your children's health," Wade said.

Meanwhile, possibly reflecting a slowdown in testing and reporting around the federal Juneteenth holiday, Arkansas' count of coronavirus cases rose Monday by 251, the first daily increase in six days that was smaller than the one a week earlier.

After rising the previous two days, the number of people hospitalized in the state with covid-19 fell by 15, to 181.

For the third time in four days, the state didn't report any new deaths from covid-19. The state's death toll, as tracked by the Arkansas Department of Health, remained at 11,540.

The increase in cases was less than half the size of the one a day earlier and smaller by 81 than the daily rise a week earlier.

Due to slowdowns in testing and reporting over the weekends, the state's daily case increases tend to be smaller on Sundays and Mondays than during the rest of the week.

The Juneteenth holiday on Sunday, which caused some government offices and businesses to be closed on Monday, may have also affected Monday's new case numbers, Tumlison said.

Previously at its highest level since February, the average daily increase in Arkansas' case count over a rolling seven-day period fell Monday to 715.

With recoveries outnumbering new cases, the number of cases in the state that were considered active fell by 456, to 8,307 -- the first daily decline in two weeks.

After not changing the previous three days, the number of the state's virus patients who were on ventilators rose by four, to 13, the largest number since May 4.

The number who were in intensive care, which fell by one on Sunday, rose Monday by seven, to 33. It was the first time the number had been above 30 since April 7.

At its hospitals in Little Rock and Springdale, Arkansas Children's had a total of seven covid-19 patients on Monday, down from eight as of Friday, DeMillo said.