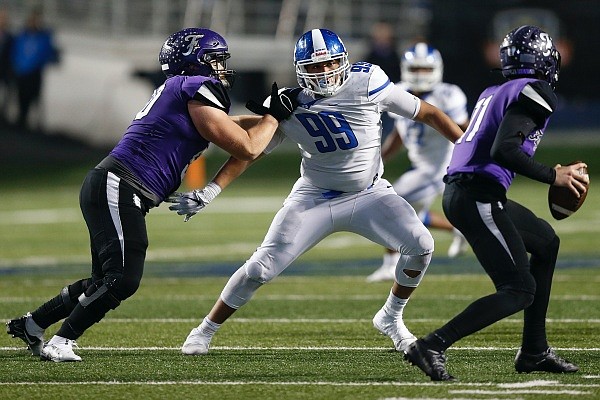 Lindsey, who received his offer from Arkansas on June 10, saw the camp as an opportunity to get to know and work with Razorbacks defensive line coach Deke Adams.

“I just wanted to work out with Coach Adams,” Lindsey said. “See how he was, see how he coached, see what he had to say to me about how I can get better and how he would get me better. I liked what he told me.”

He has seen his stock quickly rise with his first Division I offer from Memphis on May 10, and since then has added others from Colorado, Houston, Texas Tech, Georgia, the Razorbacks and most recently one from TCU.

Lindsey, 6-4, 270 pounds, is explosive off the ball and shows above-average speed for a lineman of his size, which allows him to chase down quarterbacks and running backs.

Adams came away even more impressed with Lindsey after seeing him in camp.

More from WholeHogSports: Ian Geffrard commits to the Razorbacks

“He thinks I have a lot of natural talent, which I agree with, and he can polish it,” Lindsey said.

He also shined as a freshman in the state’s largest classification and was a key to the Hornets winning the state title in 2020.

Lindsey isn’t a stranger to Fayetteville. He visited the Razorbacks on Jan. 15 and for the football team’s open practice on April 16 prior to attending the camp.

“I liked that we’re starting to build a relationship,” said Lindsey, whose father measures 6-6. “He’s starting to know me deeper than football. That’s really what it’s about, because if I come up here it’s going to be more than football.”

Lindsey is eyeing two more visits in June and another trip to Fayetteville is a possibility next month.

“I’m going to Georgia on the 23rd and then Florida State on the 30th,” Lindsey said. “I might come back up here in July and maybe Louisville in late July.”