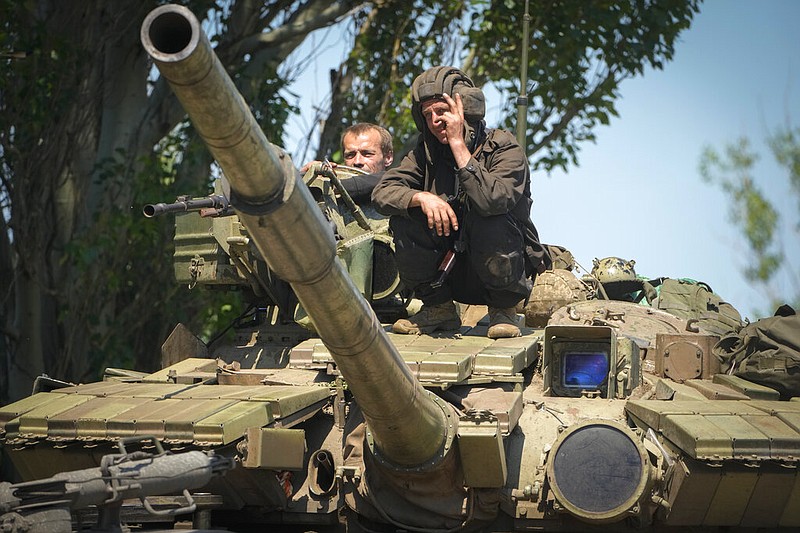 KYIV, Ukraine -- Russia's military kept grinding down Ukraine's defenses Monday, with combat in eastern areas said to be entering a "decisive" phase as the war's consequences for food and fuel supplies increasingly weighed on minds around the globe.

In Ukraine's eastern Luhansk region, which in recent weeks has become the focal point of Moscow's attempt to impose its will on its neighbor, battles raged for the control of multiple villages, the local governor said.

Ukrainian Deputy Defense Minister Hanna Maliar said the Kremlin had ordered the Russian military to overrun the entire Luhansk region by Sunday. Currently, Moscow's forces control about 95% of the region.

Maliar said in televised remarks that "without exaggeration, decisive battles are taking place" in the area, where Ukrainian forces are desperately trying to avoid being encircled.

"We must understand that the enemy has an advantage both in terms of personnel and weapons, so the situation is extremely difficult. And at this very minute these decisive battles are ongoing at the maximum intensity," Maliar added.

"We need your support, we need weaponry, weapons that will have better capabilities than the Russian weapons," he told a forum in Milan that was organized by the ISPI geopolitical think tank. He spoke by video link.

Zelenskyy added: "This is a matter of life or death."

The villages where combat is fierce are around Sievierodonetsk and Lysychansk, two cities in the Luhansk region yet to be captured by the Russians, according to Luhansk Gov. Serhiy Haidai.

Russian shelling and airstrikes on the industrial outskirts of Sievierodonetsk have intensified, he said.

Haidai told The Associated Press on Monday that the situation in Sievierodonetsk was "very difficult," with the Ukrainian forces maintaining control over just one area -- the Azot chemical plant, where a number of Ukrainian fighters, along with about 500 civilians, are taking shelter.

The Russians keep deploying additional troops and equipment in the area, he said.

"It's just hell there. Everything is engulfed in fire, the shelling doesn't stop even for an hour," Haidai said in written comments.

Only a fraction of 100,000 people who used to live in Sievierodonetsk before the war remain in the city, with no electricity, communications, food or medicine.

Even so, Haidai said, the staunch Ukrainian resistance is preventing Moscow from deploying its resources to other parts of the country.

The British Defense Ministry noted that the war is not going all Russia's way, despite its superior military assets.

Russian ground troops are "exhausted," the Defense Ministry said in an intelligence report Monday. It blamed poor air support for Russia's difficulty in making swifter progress on the ground.

Across the world, drivers are rethinking their habits and personal finances amid surging prices for gasoline and diesel, fueled by Russia's war in Ukraine as well as the global rebound from the covid-19 pandemic. Energy prices are a key driver of inflation that is rising worldwide and making the cost of living more expensive.

The European Union's top diplomats gathered in Luxembourg on Monday for talks focused on Ukraine and food security.

EU foreign policy chief Josep Borrell called on Russia to lift its blockades of Ukrainian ports to help deliver the millions of tons of grain waiting to be exported.

"I hope -- more than hope, I am sure -- that the United Nations will at the end reach an agreement," Borrell said. "It is unconceivable, one cannot imagine that millions of tons of wheat remain blocked in Ukraine while in the rest of the world, people are suffering [from] hunger. This is a real war crime ... You cannot use the hunger of people as a weapon of war."

Financial help for children displaced by the war in Ukraine was due to come from an unlikely quarter later Monday, when Russian journalist Dmitry Muratov looked to auction off his Nobel Peace Prize medal in New York.

Muratov was awarded the gold medal in October 2021. He helped found the independent Russian newspaper Novaya Gazeta and was the publication's editor-in-chief when it shut down in March amid the Kremlin's clampdown on journalists and public dissent after Russia's invasion of Ukraine.

Muratov had already announced he was donating to charity the $500,000 cash award that came with the prize. The proceeds will go directly to UNICEF in its efforts to help children displaced by the war in Ukraine.

In other developments Monday, Kremlin spokesman Dmitry Peskov said two American veterans who were captured by Russian forces while fighting alongside the Ukrainian military should be "held responsible for the crimes they have committed." Speaking in an interview with NBC News, Peskov said the Americans -- Alex Drueke and Andy Huynh, both from Alabama -- are not protected by the Geneva Conventions as prisoners of war.

A Russian governor said Ukrainian shelling of a Russian village near the border with Ukraine wounded one person. A power station was hit, leaving parts of the village without electricity, according to Alexander Bogomaz, governor of the Bryansk region.

The Russian military said it hit an airfield in Ukraine's southern Odesa region with a missile, destroying two Bayraktar drones and a drone control station.

The head of the Russia-backed authorities in the Crimean Peninsula, annexed from Ukraine in 2014, said Ukrainian forces had struck three platforms operating in a Black Sea gas field. Sergei Aksyonov told Russian TV that 12 people had been on the platform that was hardest hit.

Five of them were rescued with injuries and the others were missing. He added that there were no confirmed cases of people being killed or injured on the other two platforms, and that Crimea wouldn't face energy shortages.

The death toll has risen to three after a Russian strike Monday that emergency crews were still trying to extinguish the flames at the facility in the Dnipropetrovsk region, about 200 miles southeast of Kyiv.

Lithuania on Monday defended its decision to bar rail transit from Russia to a Russian Baltic Sea exclave of goods hit by EU sanctions.

Lithuanian Foreign Minister Gabrielius Landsbergis said his country was simply implementing sanctions imposed by the EU, of which it is a member. He said the measures implemented Saturday were taken after "consultation with the European Commission and under its guidelines."

"Sanctioned goods [will] no longer be allowed to transit Lithuanian territory," Landsbergis added.

Goods on the list include steel, but are set to be broadly expanded to cover items from coal to alcoholic drinks.

The Kaliningrad exclave is surrounded by Lithuania and Poland, another EU country, to the south and isolated from the rest of Russia. Trains with goods for Kaliningrad travel via Belarus and Lithuania. There's no transit through Poland.

Russia can still supply the Kaliningrad exclave, home to some 430,000 people, by sea, without falling afoul of EU sanctions.

Russia has demanded that Lithuania immediately lift the ban, with the Foreign Ministry in Moscow saying that if transport links are not restored in full, "Russia reserves the right to take action in defense of its national interests."

"This decision, indeed unprecedented, is a violation of everything and then some," Peskov told reporters Monday.

Lithuania summoned the Russian envoy in Vilnius to tell him the ban was in line with EU sanctions and there was no blockade of Kaliningrad.

Borrell said Lithuania's move should not be compared to the situation in Ukraine. He added that Lithuania did not take any unilateral national restrictions and denied that land transit between Kaliningrad and other parts of Russia had been stopped, or banned.

Lina Laurinaityte Grigiene, a customs spokeswoman, said affected items include Russian steel "that cannot be transported over the territory of European countries."

She added that starting July 10, similar sanctions will be implemented on concrete and alcohol goods, from Aug. 10 on coal and from December no Russian oil will be allowed into EU territory.

Anton Alikhanov, the governor of the Russian exclave, has estimated that the ban would affect some 50% of all goods flowing toward Kaliningrad by rail. He also said he would call on Russian authorities to take measures against Lithuania and would seek to have more goods sent by ship.

Borrell said on Monday that he has written to all African foreign ministers to explain that the bloc's sanctions on Russia are not responsible for the looming global food crisis, and pledged to work out ways for exports of food and fertilizers to reach their continent.

The EU has not banned exports of Russian food or fertilizers to non-EU nations as part of its sanctions package. Russia's war against Ukraine has been preventing some 20 million tons of Ukrainian grain from getting to the Middle East, North Africa and parts of Asia.

Earlier this month, the chairman of the African Union, Senegal's President Macky Sall, told Putin that the fighting in Ukraine and Western sanctions had worsened food shortages, and appealed to other countries to ensure grain and fertilizer exports from Russia and Ukraine aren't blocked.

Borrell said it is "a deliberate attempt [by Russia] to create hunger in the world."

Sall complained that the collateral effects of the EU decision to expel many Russian banks from the SWIFT financial messaging system will hurt African countries' ability to make payments for food imports.

"If there is a problem, we will solve it," Borrell said. "But I have to know the problem. Not the whole financial system of Russia is de-Swifted."

Meanwhile, Borrell said the bloc is ready to look into whether sanctions imposed on Belarus before the war targeting exports of potash -- a common fertilizer ingredient -- can affect its distribution across the world.

In addition, Borrell said the European Commission will send letters to all financial and economic actors to explain what they can do under the sanctions regime.

Ukraine is planning to tour an exhibition of destroyed Russian military vehicles across Europe, as it strives to maintain public attention on the conflict.

"We'll help to ensure that Russian tanks are in Europe, but as scrap," Defense Minister Oleksii Reznikov told Polish broadcaster Polsat in an interview.

Ukraine plans to start the exhibition in Warsaw before moving on to Berlin, Paris, Madrid and Lisbon.

Ukraine claims Russia has lost some 1,477 tanks and 3,588 armored vehicles since the invasion began in February. Some of the missiles, burned Russian tanks and other military vehicles are being displayed in downtown Kyiv.

The European Union will decide on Ukraine's bid for candidacy status to join the bloc this week. While the French, Italian and German leaders have already given their blessing, all member states must agree.

Russia doesn't disclose data on its tank losses in Ukraine. Its forces have destroyed 3,696 Ukrainian tanks and other armored military vehicles since the start of the war, Konashenkov said in a televised statement Monday.

Information for this article was contributed by John Leicester, David Keyton, Liudas Dapkus, Jan M. Olsen and Samuel Petrequin of The Associated Press and by Piotr Skolimowski of Bloomberg News (TNS). 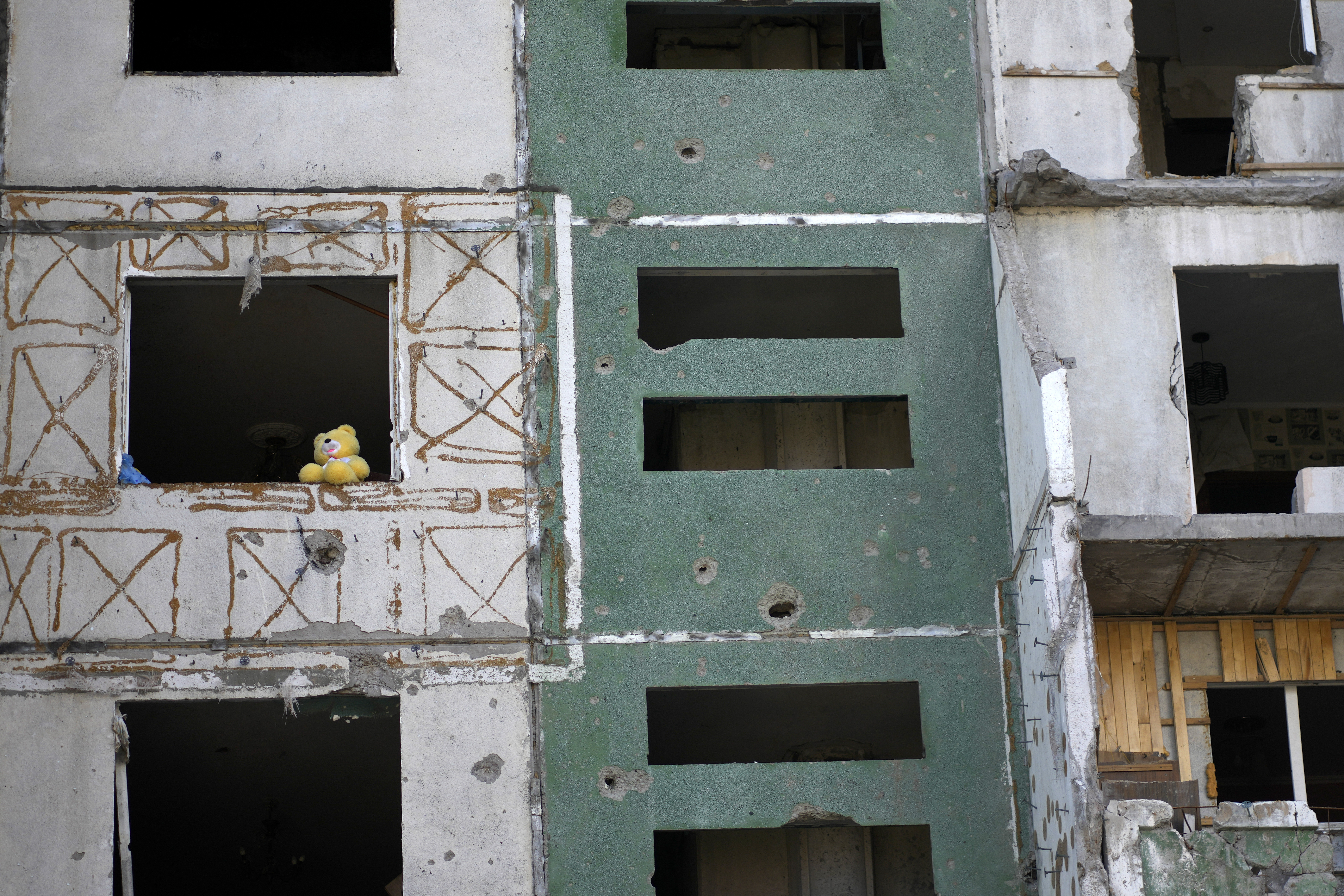 A teddy bear is seen on a building destroyed by attacks in Chernihiv, Ukraine, Sunday, June 19, 2022. (AP Photo/Natacha Pisarenko) 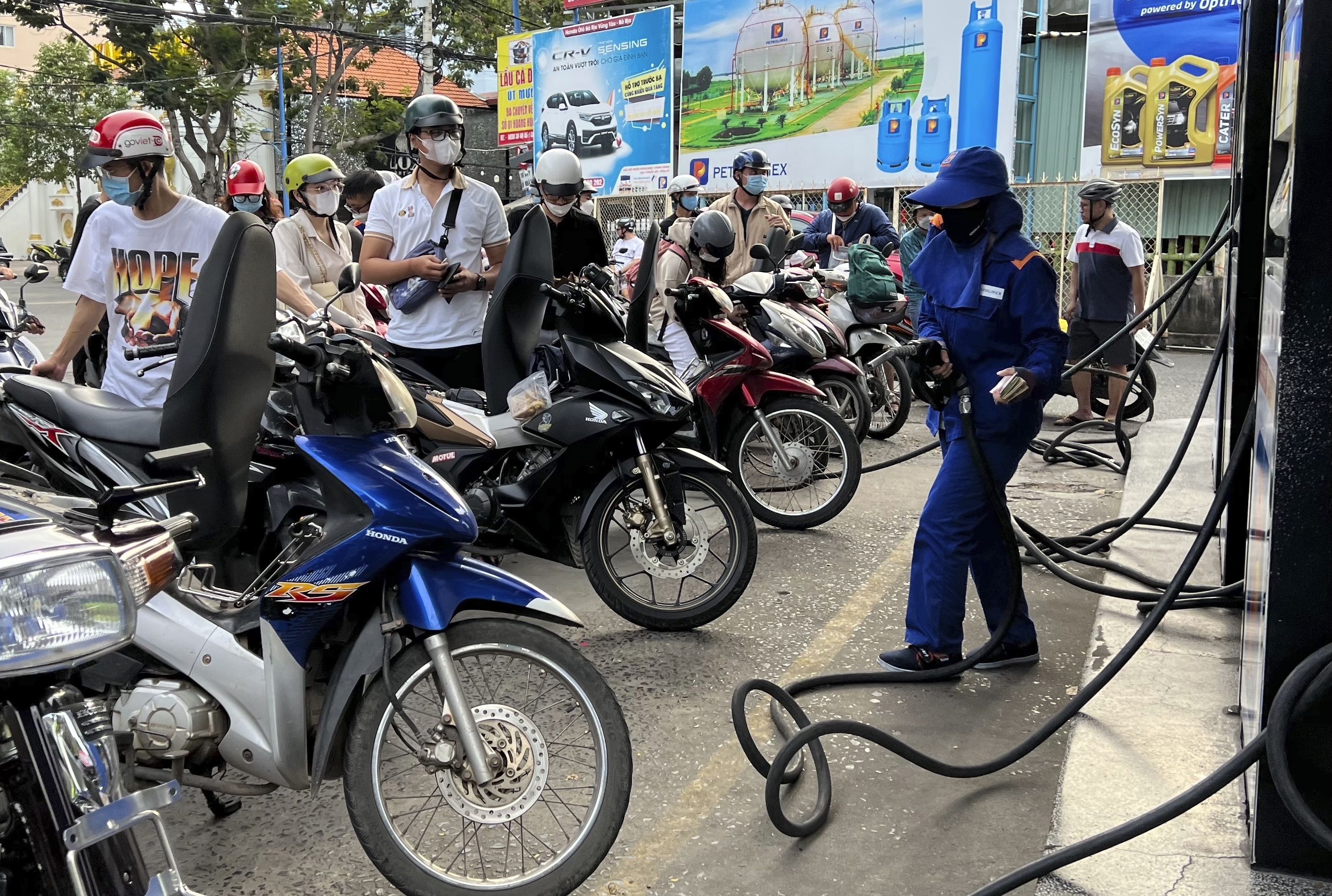 People wait for gas pump in Hanoi, Vietnam Sunday, June 19, 2022. Across the globe, drivers are rethinking their habits and personal finances amid skyrocketing prices for gasoline and diesel, fueled by Russia's war in Ukraine and the global rebound from the COVID-19 pandemic. Energy prices are a key driver of inflation that is rising worldwide and making the cost of living more expensive.(AP Photo/Hau Dinh)