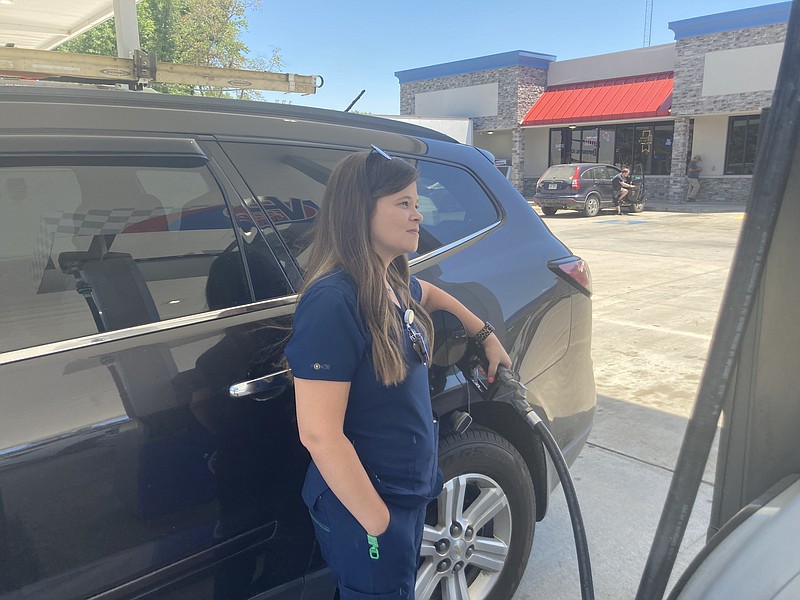 Carla Solano watches as the price of the gas she's buying on Monday comes to a stop at $89. In normal times, she said, her family is able to travel more but not now with the high price of fuel. (Pine Bluff Commercial/Byron Tate)

Editor's note: This is part one of an occasional series on how people and other entities are coping with the high cost of fuel.

Even asking Judy Hays about gasoline was a mistake of sorts.

Hays and her husband Johnny live in Wilmar, about halfway between Warren and Monticello. They had stopped at the VP Racing Fuels convenience store on state Highway 63, just south of the I-530 bypass, to fill up. The two were on their way to St. Joe, in Searcy County, where they have a few acres they tend to.

"We have to go up there every two weeks to mow," she said as the total she owed on the pump increased at a dizzying pace.

Hays patted her SUV and said it would be worse if "this ride" didn't get 33 mpg. But still, she said, it's 200 miles from their driveway up to their land between Marshall and Harrison. "And then of course it's another 200 to get home," she said.

Hays said she and Johnny have a garden that keeps them in veggies for much of the year, but even that has gotten more expensive.

Hays said if they don't go every two weeks, it costs more to mow the place because it might take two passes at the grass to get the job done. And as for hiring someone, she said they'd thought about it but that people are charging more to cut grass because, well, gas is so high.

"It's too high!" Johnny Hays hollered as he returned from inside the convenience store and hopped into the passenger seat.

The tab on their gas purchase was close to $50, which, Hays said, amounted to three-quarters of a tank. "I'll have to fill up again to get home," she said as she got behind the wheel and started the engine.

The Hayses sounded a lot like the handful of other people who were asked how gas prices had affected their budgets and their lives. Most said they were having to think harder about going places, with a few saying they had virtually stopped driving unless it was critical.

Several factors are creating this perfect storm of high fuel prices, according to various national media. When Russia invaded Ukraine and much of the world put sanctions on Russian goods, Russia stopped selling as much oil, leading to an increase in worldwide prices. The United States is a big producer of oil, but the ups and downs of petroleum demand relating to the pandemic, as well as economic pressures relating to increasing production have limited oil output when demand is high. The end result are record-setting gas prices that are eating into budgets and feeding an inflation level that is also at levels not seen in decades.

Carla Solano had stopped to fill up her SUV, something that she says has taken a good chunk of play time out of the family's schedule and caused her husband to buy a different vehicle.

Solano has two teenage daughters, one of whom drives. Asked if the high cost of gas had been an issue for the family, she said it had.

"Absolutely," she said. "We normally spend a lot of time at the lake, but due to gas being up, it's not an option this year. We drive sparingly now."

One of the daughters, Solano said, is in Future Farmers of America, and raises lambs. "So she needs gas for her car, too," Solano said. "We're definitely sitting at home a lot more than we normally would."

And because Solano's husband drives back and forth to Little Rock for his job, he has parked his full-sized pickup truck and is now driving a newly purchased Chevrolet S-10, a compact pickup that gets much better gas mileage.

"It's definitely cheaper for him to drive that than his big truck," she said, as she shook her head at the $89 she had just spent.

Shirley Randolph, who was putting in whatever $20 would buy, said she, too, had had to limit what she does.

And before the question was fully posed, Maya Frazier had shot back her answer.

As the pump total quickly reached the $15 she had paid for, giving her less than four gallons, Frazier said she spends more time at home these days.

"It has most definitely had an impact on me," she said. "I don't go out. I don't even go to Little Rock like that anymore unless it's something like a doctor's appointment."

A couple of people said the high prices had not affected their activities – at least to this point.

"This is my wife's car," said Earl Keaton, motioning toward the SUV he was filling up. "It's the nanny-mobile. We got it to haul the grandkids around in. We've been on the road a lot. Destin, south Louisiana. It's been travel, travel, travel, so it hasn't stopped us yet."

Another woman, who declined to give her name, when asked if gas prices had affected her, said "not really, not yet."

And a man, who also said he'd rather not give his name, blamed the problem of high gas prices on the government.

"We just try to be a little more careful," he said. "We do what we want to do, but I'm like everybody else; I don't like the gas prices. I just think it's our government. They tell us they don't have anything to do with the prices of gas, but I think they do."