Georgia commit a big get for Hogs 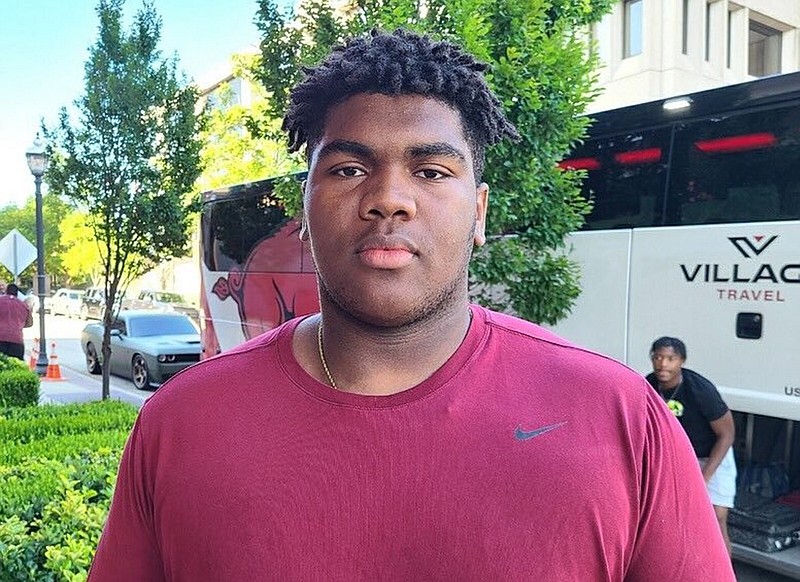 Defensive tackle Ian Geffrard left his official visit to the University of Arkansas on Sunday high on the Razorbacks, and on Monday he publicly committed to the program.

"Just the way Coach Pittman changed the program and the interactions he had with the other coaches and players," he said.

Prior to his visit to Fayetteville, Geffrard said he preferred playing on offense but has warmed up to playing defense after spending time with Arkansas defensive line coach Deke Adams.

"I spent a lot of time with him and then we saw eye-to-eye on a lot of things," said Geffrard, who was recruited to play defense by the Razorbacks and two other schools. "It's funny because I didn't see myself playing defense in college, and now here we are now."

Should Geffrard sign with the Razorbacks, he would likely be one of the largest signees the football program has signed.

Freshman offensive lineman E'Marion Harris of Joe T. Robinson is the only other prospect of similar size as Geffrard in the last 20 years. Harris was listed at 6-7, 370, when he signed in the 2022 class.

"I think what stood out about Ian is he's an extremely large human being," Whitefield Academy Coach Coleman Joiner said. "He's every bit of 6-6, 6-7, 370 pounds, but it's his athleticism that goes along with his size that I think really sets him apart [from] most people."

Geffrard, who had 37 tackles as a junior, plays on both sides for the Wolfpack. Pittman and his coaching staff plan to look at him on defense, but offensive line is also a possibility.

"Just talking to them, what makes him such a unique prospect is his ability to play both sides of the ball," Joiner said. "I think they believe they're going to find a home for him somewhere. They're kind of recruiting him as a jumbo athlete, they say."

Geffrard is Arkansas' 14th commitment in the 2023 class.

Print Headline: Georgia commit a big get for Hogs