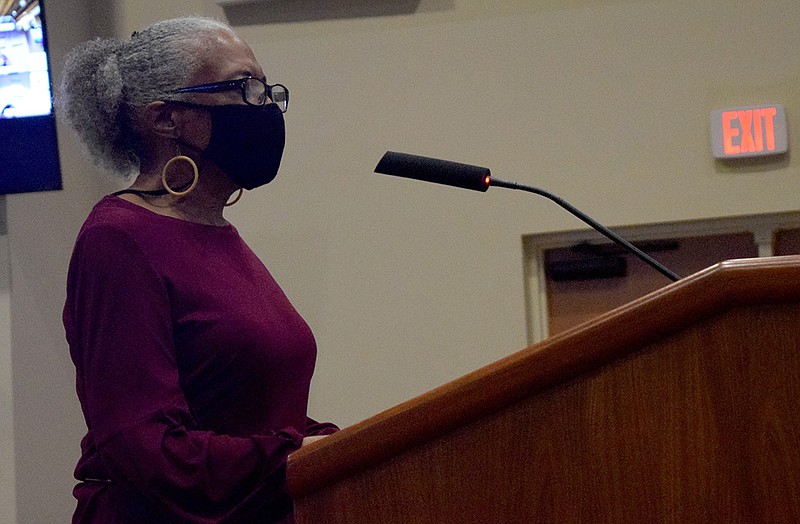 Loretta Hendrix, the daughter of the late Little Rock City Director Erma Hendrix, addresses members of the Little Rock Board of Directors at a Sept. 21, 2021, meeting. (Democrat-Gazette file photo)

Loretta Hendrix, an announced candidate for the Ward 1 seat on the Little Rock Board of Directors, was injured in a shooting Saturday while driving, according to a Little Rock Police Department report.

As of Monday afternoon, Hendrix remained at the University of Arkansas for Medical Sciences hospital after the incident, she said when reached by phone.

Hendrix, 73, is the daughter of the late Ward 1 City Director Erma Hendrix, who died in office last September at age 91.

About 10 p.m. Saturday, police responded to 1501 Wright Ave. in reference to a shooting that had just occurred and found Hendrix with an apparent gunshot wound to her left leg and femoral bleeding, according to the police report.

After police applied two tourniquets to her injured leg, Hendrix was handed off to paramedics for transportation to UAMS, the report said.

In the vehicle's front passenger seat at the time of the shooting was Hendrix's sister, Phyllis Brown, 66, police reported.

Officers found multiple shell casings in the roadway and around the property of 811 and 813 W. 15th St.

The residence at 813 W. 15th St. had been struck by three bullets, and although police attempted to make contact with a homeowner, no one answered the door, according to the report.

Additionally, police dispatched to 1312 W. 15th St. in reference to a bullet that struck the residence at the same time as the reported shooting found a bullet that had entered through an east-facing window.

Two 88-year-old individuals were inside with a guest at the time of the shooting, but they were unhurt, the report said.

Brown's vehicle, a 2008 Honda CR-V, was towed to the crime scene bay for processing, the report said.

At the time of the shooting, Hendrix was returning home from a memorial service for a friend when "we just got caught in between crossfire," she said. "You know, I had never experienced anything like that in my neighborhood."

There has been an increase in the number of gunshots in the neighborhood starting approximately a year and a half ago after a long period of quiet, she recalled.

A detective visited Hendrix in the hospital on Monday, she said, adding that she expected another visit from police before the day was over.

Hendrix had surgery early Sunday morning, she said, and anticipated she would leave the hospital today in order to go to another facility for rehabilitation.

Contests for six of the seven ward-specific seats on the Little Rock Board of Directors as well as mayor will be on the ballot during the November election. The board's structure also includes three at-large representatives.

Candidate packets are currently available from the city. The filing period will run from July 29 until Aug. 19 at noon.

In January, Hendrix announced a bid for mayor, but last month changed her mind and said she would instead run for the Ward 1 seat formerly held by her mother.

Hendrix and other potential Ward 1 contenders are expected to face City Director Virgil Miller Jr., whom the city board appointed last year to fill the vacancy left by Erma Hendrix's death.

Miller has said he intends to seek a full term of his own during the November election.

Winners of the municipal contests will be inaugurated for four-year terms that begin Jan. 1, 2023.