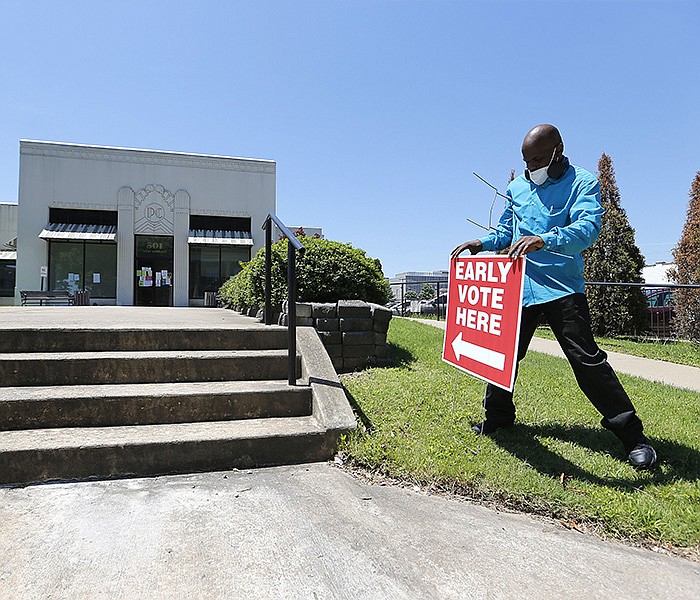 Poll worker Ron Dangerfield adjusts a voting sign that had fallen down outside the Pulaski County Regional Building on Monday, June 20, 2022, in Little Rock. Monday was the final day of early voting in the state. (Arkansas Democrat-Gazette/Thomas Metthe)

More than 18,000 Arkansans cast ballots in early voting for today's primary runoff in which there are contested runoffs for 10 legislative seats and various county offices in 30 of the state's 75 counties.

Based on records released Monday by the secretary of state's office, the largest number of early votes had been cast in Baxter, Benton, Boone, Crawford and Greene counties.

There are Republican runoffs for three state Senate seats and seven House of Representatives seats to determine the party's nominees.

[RESULTS: See the results of the 2022 primary runoff » arkansasonline.com/2022primaryrunoff/]

The highest-profile state Senate runoff is a rematch between Sen. Bob Ballinger of Ozark and former Sen. Bryan King of Green Forest in Senate District 28.

"I think we are in good shape, but we won't know until tomorrow," Ballinger, who ousted King in the Republican primary in 2018, said Monday.

"If enough Republicans show up, we'll do good."

King said that "it is just about turnout" in the runoff.

Senate District 28 includes all of Carroll and Madison counties and parts of Boone, Franklin, Johnson and Newton counties.

More than 1,000 early votes have been cast in the runoff election in Boone County, according to records released by the secretary of state's office on Monday afternoon.

Benton County election administrator Dana Caler said Monday afternoon that about 1,350 voters out of the 56,902 eligible runoff voters in Benton County had cast a vote in the runoff.

[VOTER GUIDE: Get the details on which seats have contested runoffs + find your districts » arkansasonline.com/voter-guide/]

"The runoff is usually lower as always," she said. "We are expecting about 10% total this year. The last primary runoff we had around 7%, but people are interested in the races that are going on right now."

Caler said the Republican runoff in Senate District 35, between businessman Tyler Dees of Siloam Springs and state Rep. Gayla Hendren McKenzie of Gravette, and the Pea Ridge School Board elections are driving the interest right now.

Washington County election coordinator Jennifer Price said that as of Monday afternoon 557 early votes had been cast during the runoff.

"We do expect to see a pretty busy or steady Election Day turnout," she said.

Price said she estimates 5% to 10% total turnout among eligible voters for the runoff.

"We have a county judge race, a Senate race, a House district race and a constable race," she said, referring to the Senate District 35 runoff and the House District 23 runoff between Lincoln School Board member Kendra Moore and Washington County Quorum Court member Jim Wilson.

McKenzie said Monday afternoon that "we are getting a good response.

Dees said he's thankful for the people who have gotten out to vote again in the runoff.

"It's probably not wise to make a prediction before we get more info," he said.

In the Senate District 22 runoff, state Rep. John Payton of Wilburn said he seems to have a lot of momentum in his bid to oust state Sen. James Sturch of Batesville, based on the feedback he has received on the streets, in restaurants and other places during the runoff.

"I'm feeling good about the race," he said.

In the House District 52 runoff in which he faces a challenge from farmer Mike Jones of Dardanelle, House Republican leader Marcus Richmond of Gravelly said he received an endorsement from Republican gubernatorial nominee Sarah Huckabee Sanders of Little Rock a few weeks ago.

"We put it out there and kind of let other people make a big deal about it," he said. "I try not to overplay anything that we got going on. ... I really do appreciate her stepping up and doing that for me."

But Jones said he doesn't think Sanders' endorsement of Richmond "has a whole lot of traction.

"We haven't heard that that really hurt us," he said.

In Pulaski County, about 210, or less than 1% of eligible voters, had cast ballots in the runoff election, according to the Pulaski County Election Commission.

"One of the races is for constable, and that is not something voters are normally familiar with or what drives them out to the polls," she said. "The [justice of the peace] race has drawn out a little more people, but not much more. If it had been a higher-ranking office we would have gotten a lot more -- for example, if it was a state rep or something like that. But for that type of race it's probably typical."

Dickens said she expects around 2% to 3% turnout total for the runoff election.

CORRECTION: Amanda Dickens is the election coordinator for the Pulaski County Election Commission. An earlier version of this article incorrectly identified her position.