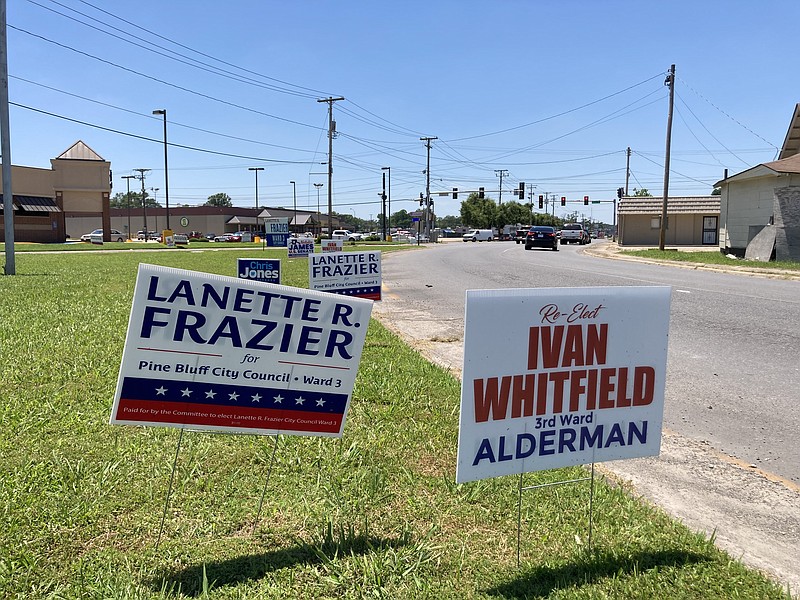 If the four remaining candidates for Pine Bluff City Council agree on one message, it's encouraging their constituents to vote again.

"It's been like starting a campaign all over again, working consistently and getting information out to the people that there is a runoff in progress and getting those who are supporters of mine to go back and vote," said Ward 3 Council Member Ivan Whitfield, who's vying for a second term against former mayoral administrative assistant Lanette Frazier.

Whitfield garnered the most votes in a three-person race for his position in the May 24 preferential primary election, but he did not attain the necessary 50% plus one vote to be automatically reelected, hence today's runoff election against Frazier.

Whitfield, a former Pine Bluff police chief, received 47.73% of the vote to Frazier's 33.53%. Both hope they have convinced either voters of third-place candidate Quranner Cotledge or those who did not make it to the polls last time that their votes will be heard.

"We have reached out to who we perceived was [Cotledge's] supporters," Whitfield said. "Once you have a runoff, you want to go back and touch everyone again."

Two other races within Jefferson County are in today's runoffs. In Ward 1, LaTisha Brunson and Danny Walker are facing off to succeed Council Member Joni Alexander on the council. And in the Vaugine Township, which encompasses all four wards of Pine Bluff, Leon Warren and DeShawn Bennett are racing for constable.

All races are on the Democratic ticket. Since there are no challengers in the Republican or other parties, the winners will be sworn into office in January.

Frazier, who is endorsed by Mayor Shirley Washington, said Cotledge offered his support to her when she reached out after the general election, but she's counting on a full-court press in her campaign strategy to unseat Whitfield.

"I did the same thing I did in the beginning, knocked on doors, made calls and did mass texting more than I did last time," she said.

Frazier said she has been focused on understanding the wants and needs of Ward 3 citizens, adding that they're looking for a council to work collaboratively and in unity.

"That doesn't always mean we agree, but we work out differences to get to the agreement part, she said. "The voters are looking for someone to fight for drainage, fight against crime and look to work to help schools get back on track even better than they were. We don't legislate their funding or curriculum, but we can support them."

If his constituents take public safety into consideration -- the biggest concern in the community, Whitfield says -- he thinks that will be enough for him to secure victory.

"This past term, I passed legislation for cameras and drainage and lights," he said. "We are dealing with the results of not taking strong initiative. It has moved from our children being shot and killed. We must come with an initiative that will help our children. The things I put on the table, it was repealed and replaced."

The past four weeks have kept Brunson and Walker quite busy. Both are seeking their first term on the council and will replace Alexander, who chose not to run for reelection.

"It's been very busy. Very hands on," said Brunson, interim director of human resources at the University of Arkansas at Pine Bluff. "It's been making sure I got people back out to vote that came out in the primary. It's been a good journey. I've met a lot of people. I am excited about what's to come. It's been getting out there and making people know who I am making sure they understand there's a runoff going on and they need to go back out and vote."

Brunson came close to wrapping up victory May 24. She garnered 47.78 of the votes, while Walker had 19.93% for second place in a five-person contest.

"People were split on going different ways and so forth," said Walker, a retired postal worker whose parents Roosevelt and Thelma Walker served on the council. "The thing is, the whole time, I think left a solid foundation [in my campaign stance] as far as public safety, improving lighting, streets, jobs, shopping, places to eat and so forth. You can only resonate a message so far, and it's up to the people to be informed and stuff."

Walker said the past month has been "a little stressful" and his campaign team had to regroup and change strategies, among other things, in hopes he can draw more votes.

"I'm not just running against my opponent but different groups supporting her," he said.

Brunson has run on the platform of sustaining and retaining small businesses in Pine Bluff. She also wants to see inclusive programming in youth clubs made possible and stresses that citizens have one another's trust on issues of safety.

Walker has touted the need for improved public safety, infrastructure, flooding, lighting, economics and restaurants in the city.

"You can't keep taxing people when you haven't seen anything happening," he said. "If the Economic Development Tax (passed in 2011) didn't create any jobs, Go Forward Pine Bluff is doing somethings productive, but they need to be more in line working with the city council. The public needs to put more input on different stuff they want to see done in the city."