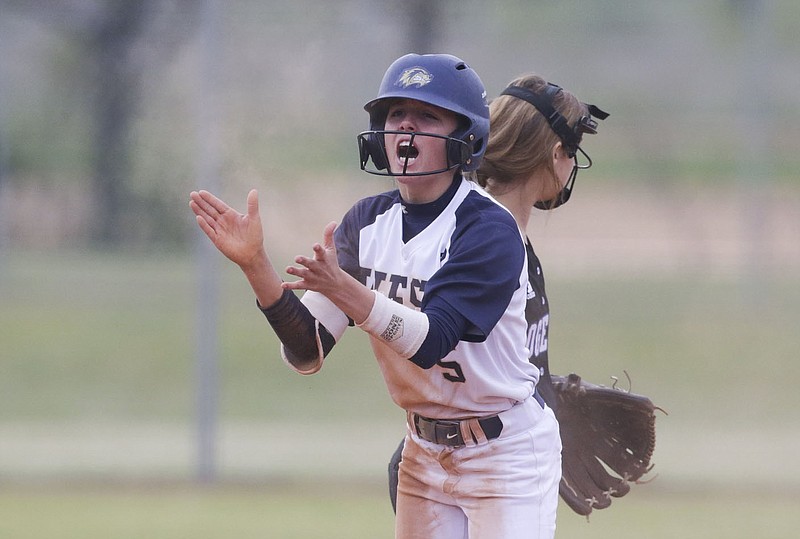 Bentonville West senior center fielder Marybeth Dyson, who has signed with Missouri Southern in Joplin, will participate in the AHSCA All-Star softball game on Friday at the University of Central Arkansas. Dyson was also selected to participate in the all-star basketball game. (NWA Democrat-Gazette/Charlie Kaijo)

CENTERTON --Marybeth Dyson had a major decision to make regarding her final weekend as a prep athlete.

The decision was not so much on where the Bentonville West graduate would be. Dyson knew she'd be in Conway on the University of Central Arkansas campus. The question was, would it be in the basketball arena or on the softball diamond.

As a multi-sport standout at West, Dyson was selected to participate in the Arkansas High School Coaches Association All-Star weekend as both a basketball player and a softball player for the West teams.

"I was very honored to be selected for both," said Dyson, "but softball is what I'm playing in college and that's what I wanted to be as my last game as a high school player."

Dyson will take the field at 4 p.m. Friday at Farris Field as a member of the West all-star softball team.

Multisport athletes are not as common in the state's largest classification schools as they are in the lower classifications. West coach Anthony Cantrell said he always encourages his players to participate in other sports, believing that it helps develop them as all-around athletes.

Dyson was a fixture atop the batting order for the Lady Wolverines, batting .398 with 41 hits, 8 doubles, 7 triples and a home run. She also scored 34 runs to help West to a 17-10 record and advance to the second round of the Class 6A state tournament.

"Marybeth and Laynee (Tapp) were both basketball players and both are just tremendous athletes, not just tremendous softball players," said Cantrell. "Players who compete in more than one sport are something we take a lot of pride in. As a coach, I want our players to take advantage of every opportunity they have in high school because that's what high school is all about. It's about learning and trying new things. We've been blessed at West to have quite a few girls who were multisport athletes and they've all been great players in this program."

Dyson will be headed to Missouri Southern in Joplin in a few weeks. She already has her roommate and is ready to take the next step in her athletic journey. This season the Lions were 26-25 and 14-12 in the Mid-America Intercollegiate Athletics Association Conference.

"I'm very excited to get there and get to work," said Dyson, who was recruited to play centerfield for the Lions. "I had a real comfort level there and the fact that it is close to home was also important to me."

"We've been fortunate to have a number of players selected several times," said Cantrell, who has coached the Lady Wolverines since the school opened. "Having three players in the game this year is special for them and for our program. All three are very deserving to have been selected."

This will be the first time since 2019 that the all-star games will be played after a two-year hiatus related to the covid pandemic. On Friday, baseball and softball games will kick off the weekend, with girls soccer scheduled for a 5 p.m. start, followed by volleyball at 6 p.m. and boys soccer at 7 p.m.

On Saturday, girls and boys basketball, and the football game will wrap up all-star weekend.