Cool as a cucumber: Shoo away summer’s heat with these mostly no-cook cuke recipes 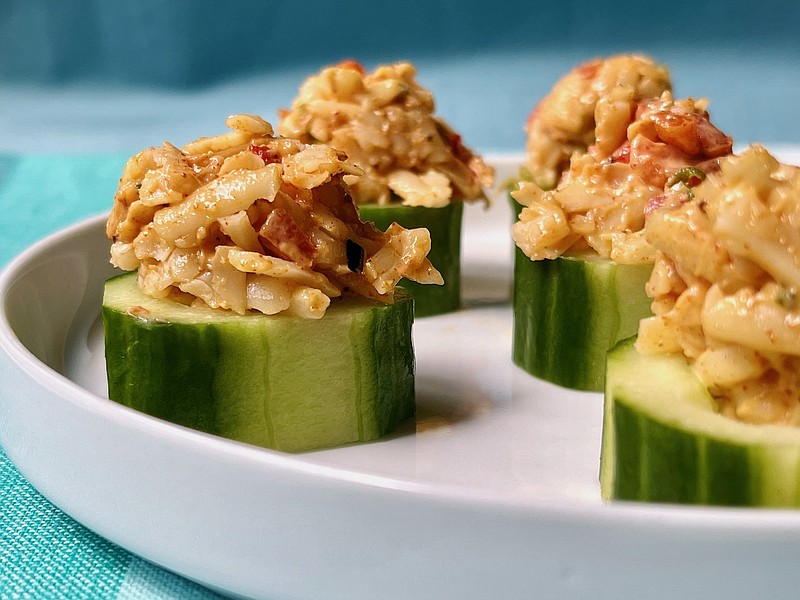 If you are what you eat, I'm desperately attempting to become a cucumber.

So I can be as cool as one.

It's far too early for us to be living in Arkansauna already.

With "feels like" temperatures in the 100s and real temperatures not far behind, we're already in the midst of it's-too-hot-to-cook season and it's only the second full day of summer. The following recipes require almost no cooking, so they won't heat up the kitchen and because they're all served at room temperature or chilled, take advantage of cucumbers' cooling effect — cucumbers can feel up to 20 degrees cooler than their surroundings.

My favorite cucumbers are the small Persian variety, often labeled mini cucumbers at the supermarket. They have tender, relatively thin skin, few, if any, seeds, and are sized just right for a one-person salad. My second favorite variety is English cucumber. They, too, have thin skin and relatively few, if any, seeds, but are much, much larger — often 8 to 12 inches long. I tend to avoid the common thick, shiny fat slicer cucumbers. (They make me eructate excessively.) But if those are what you like to eat, they'll work in all of the following recipes.

Other common varieties include:

Japanese: Just as long, but bumpier than their English cousins, Japanese cucumbers have a delicate flavor.

Kirby: Short and bumpy, these are preferred for pickling.

Lemon: The rarest of our list, this heirloom variety looks more like a tiny yellow watermelon than a cucumber.

According to Men's Health, the Scripps Research Institute declared cucumbers to be a superfood in 2019. While there's no universally recognized list of superfoods, Webster's defines a superfood as "a nutrient-rich food considered to be especially beneficial for health and well-being."

Of course, to get all of those nutrients one must eat the whole cucumber, not just the peeled, de-seeded shells of former cukes.

Large cukes can be transformed into edible serving vessels, ideal for stuffing with everything from tuna salad to this delicious pimento cheese.

Using a vegetable peeler, remove a few strips of skin from each cucumber, leaving most of the skin intact. Cut each cucumber into ½- to ¾-inch thick rounds. Using a spoon or a melon baller, scoop out a small bit of flesh from each slice to create a small well. Spoon a bit of pimento cheese on top of each slice, pressing it into the scooped out area.

Recipe adapted from "In My Kitchen: A Collection of New and Favorite Vegetarian Recipes" by Deborah Madison 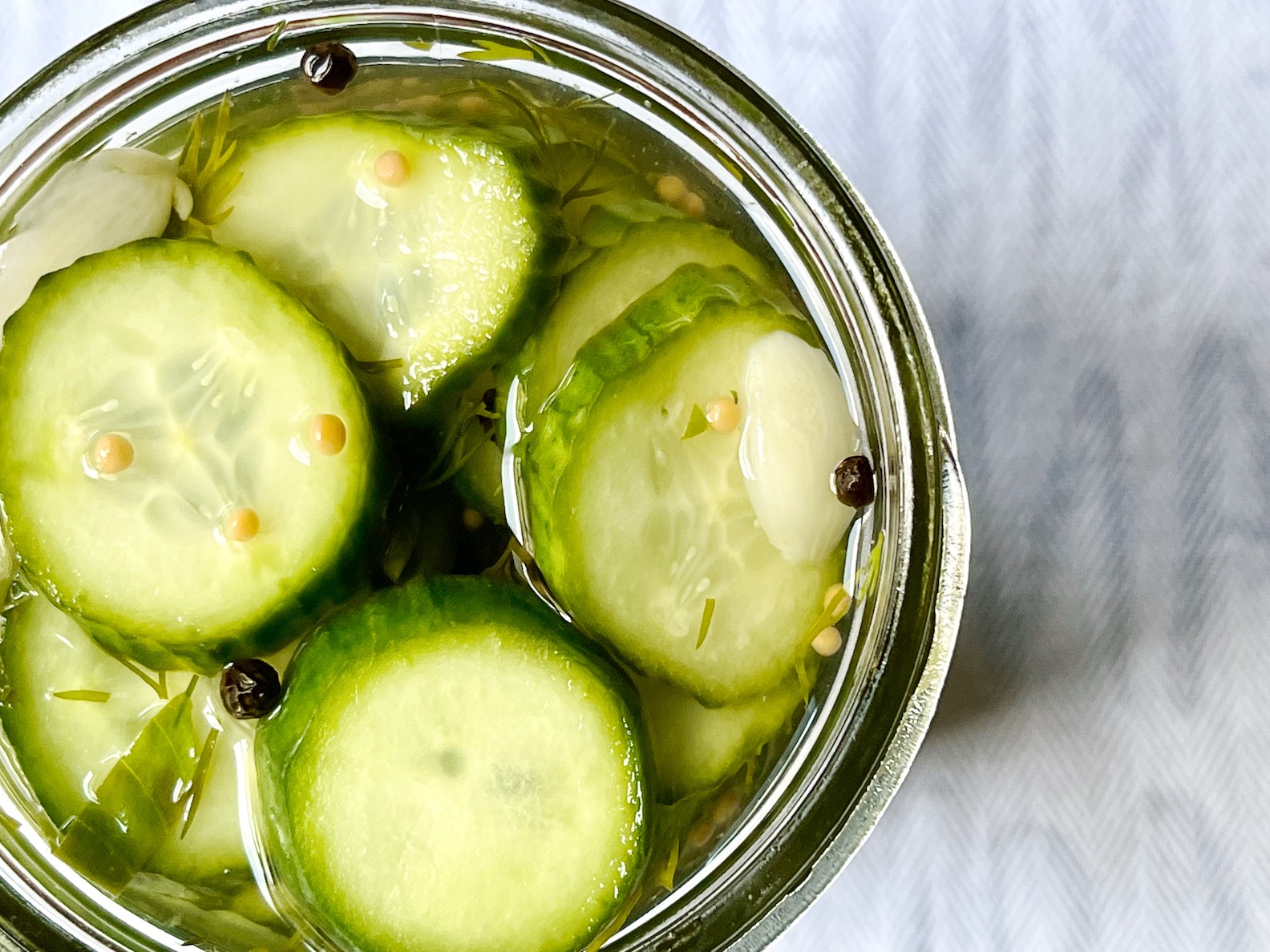 Quick Pickles (Arkansas Democrat-Gazette/Kelly Brant)  These slightly sweet and sour pickles do require turning on the stove, but only briefly. Serve them on grazing boards, in salads, atop a burger or with anything that needs a pop of zingy flavor.

In a heat-safe bowl, combine the cucumbers, dill and basil. Pour the simmering liquid over the cucumbers and stir to coat evenly. Allow to cool to room temperature and then chill until ready to serve. Pickles will keep in the refrigerator for about 2 weeks. 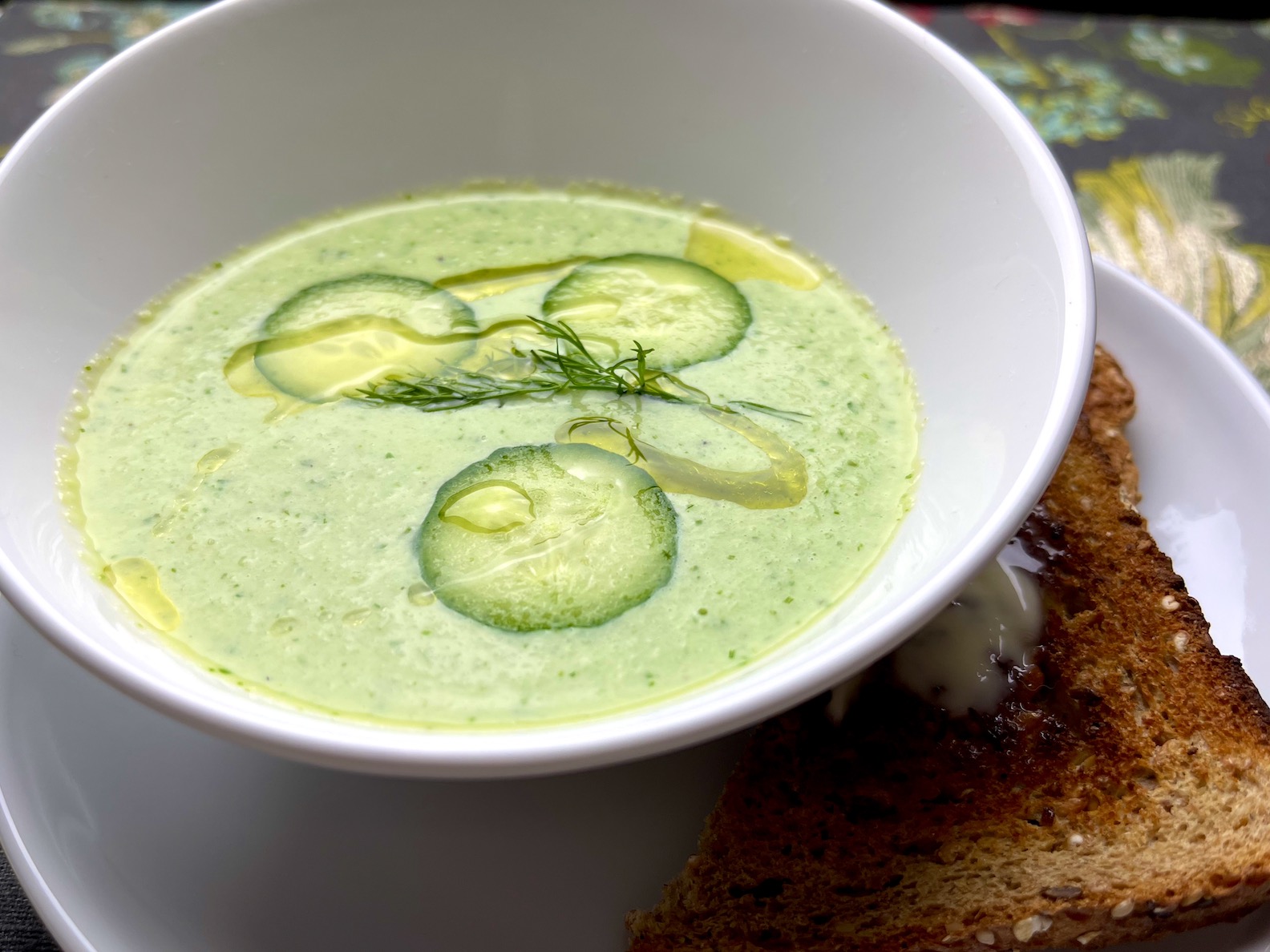 Chilled Cucumber-Yogurt Soup (Arkansas Democrat-Gazette/Kelly Brant)  This recipe takes all the flavors of my favorite cucumber dip — tzatziki — and turns them into a refreshing soup.

Cut a few thin slices from one of the cucumbers; set aside. Cut the remaining cucumber(s) into large chunks.

Serve in bowls and garnish with the reserved cucumber slices, fresh herbs and a drizzle of olive oil. 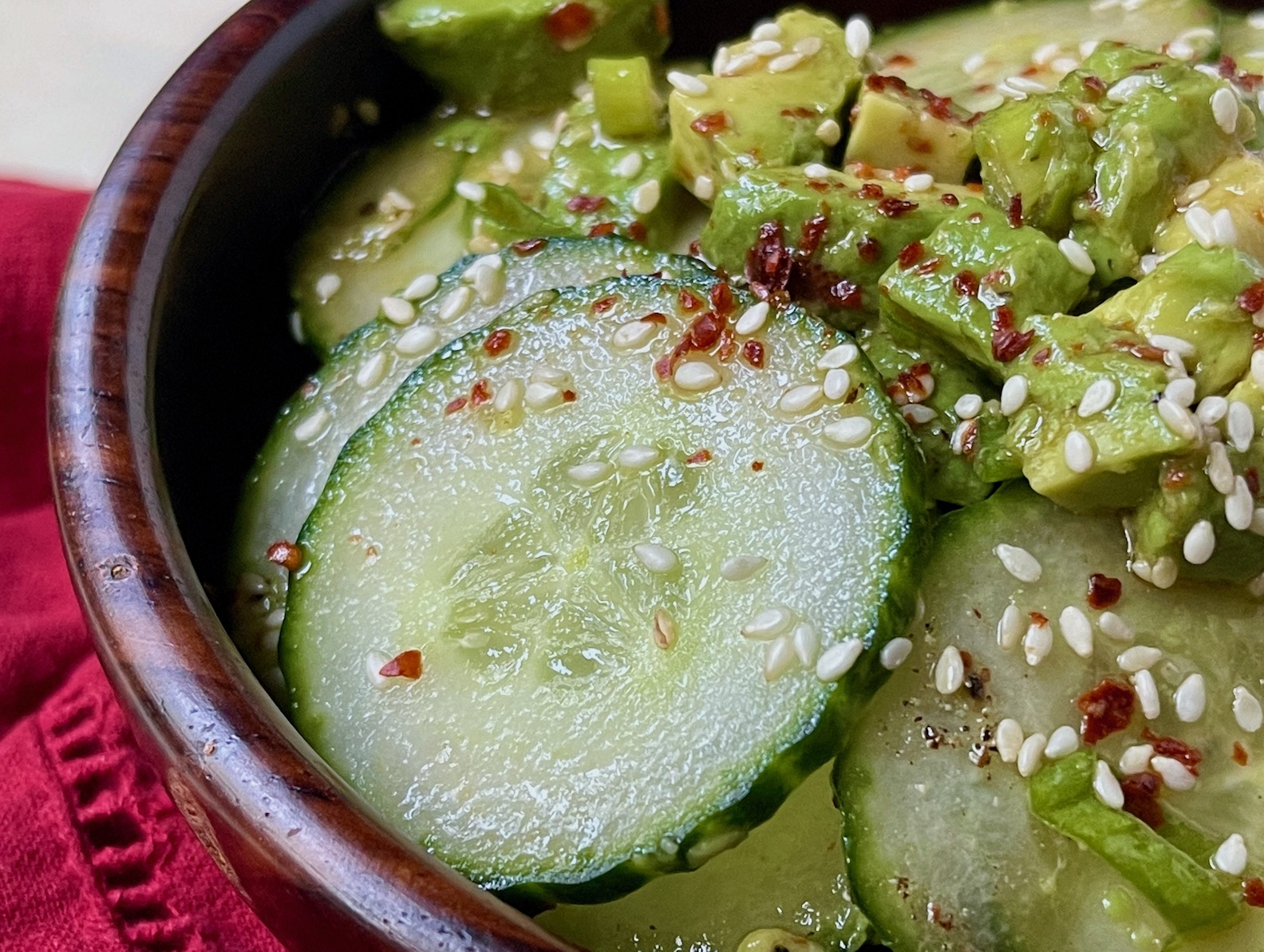 Sesame Cucumber and Avocado Salad (Arkansas Democrat-Gazette/Kelly Brant)  The contrasting textures of crisp cucumber and buttery avocado works in this recipe. A sweet-tart-spicy toasted sesame dressing ties everything together. Serve it as a side, or if a little protein is desired add a little tuna or salmon.

Halve the avocados and discard the pits. Using a small paring knife, carefully score the avocado flesh into ½-inch cubes, avoiding cutting through the skin. Use a large spoon to scoop out the avocado flesh, as close to the skin as possible, into a large bowl. Add the dressing; toss gently. Add the cucumbers and green onions and toss everything together. Season with salt and black pepper, top with more sesame seeds, and serve immediately.

Notes: If using seasoned vinegar, you may not need much, if any, sugar. To toast, place the sesame seeds in a small skillet set over medium-low heat and cook, shaking pan or stirring very frequently, until seeds turn golden, 3 to 5 minutes.

Recipe adapted from Hetty McKinnon via The New York Times 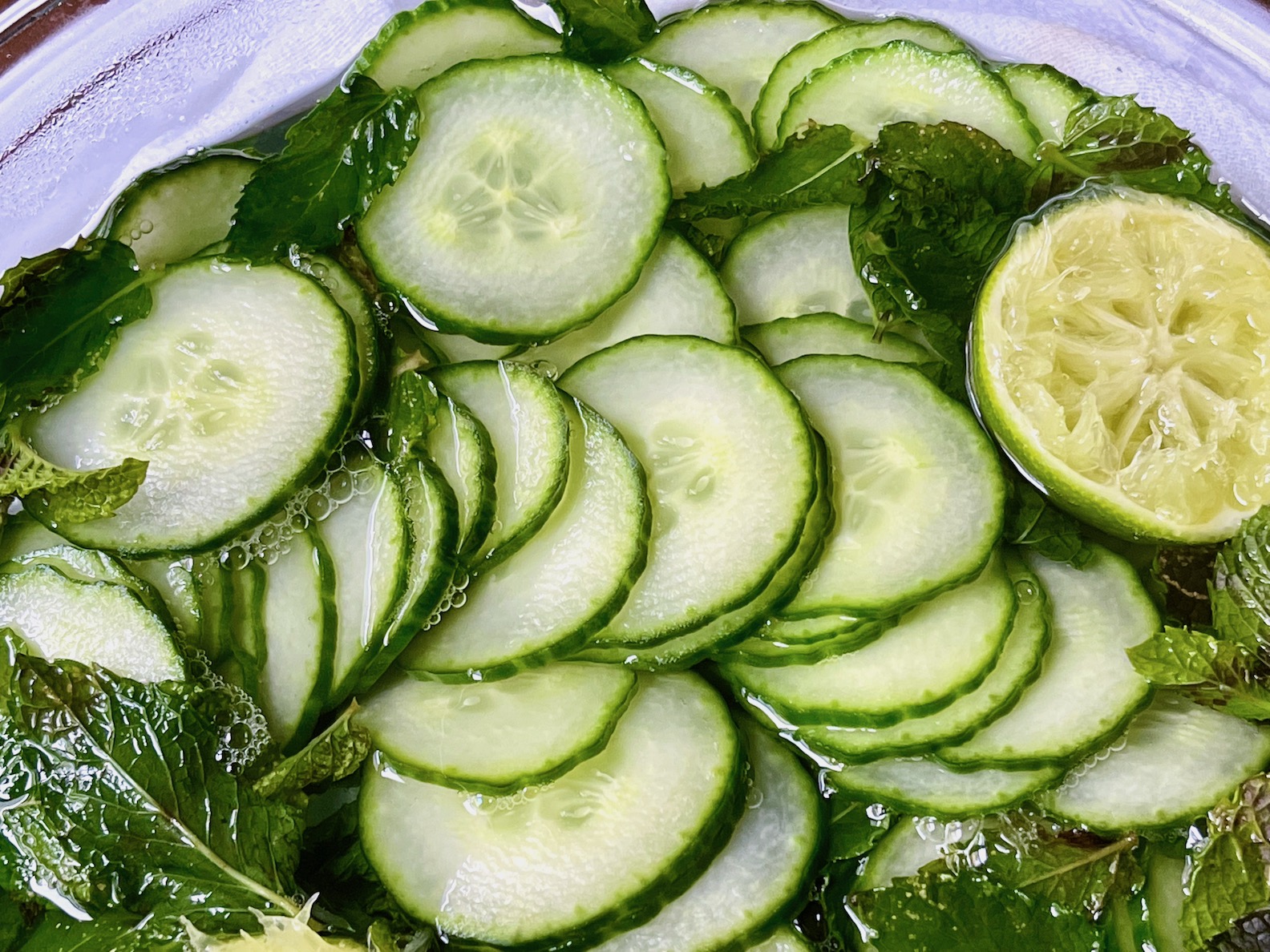 Cucumber Mint Syrup before straining (Arkansas Democrat-Gazette/Kelly Brant)  This is another recipe that you'll need the stove for, but only for about 5 minutes. Make the syrup early in the morning and you'll have a refreshing base come happy hour. Add this syrup to seltzer for a refreshing cooler on its own or turn it into a cocktail with a shot of vodka or gin.

In a saucepan, combine the sugar and 1 quart of water; bring to a simmer, stirring to dissolve the sugar. Simmer gently for 3-4 minutes, until slightly syrupy.

Place the cucumbers and mint leaves in a large bowl. Squeeze the lime halves over the cucumber slices and then add the squeezed halves to the bowl. Pour in the hot syrup; set aside to cool completely. Strain the mixture through a fine-mesh sieve to remove the solids. Don't mash or press the mixture. Syrup will keep in the fridge for up to 3 weeks.

Print Headline: Cool as a cucumber