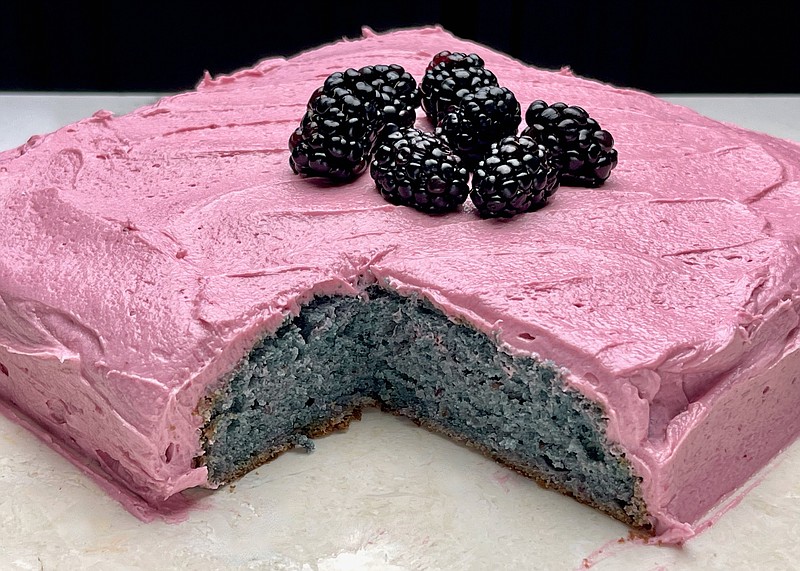 This cake looks like it's just one handful of blue sprinkles or edible glitter away from a unicorn cake, but looks can be deceiving.

Neither the cake nor the frosting contains even a drop of artificial flavor or color. Instead, those vibrant pink and bluish-purple hues come from fresh blackberries.

A cake that looks straight out of a 'tween's birthday party wasn't my intent. I was actually trying re-create a cake I made last year, but in blackberry. You may remember this strawberry cake (see arkansasonline.com/622pink/) featuring sliced fresh strawberries stirred into the batter.

I wanted to do something similar but with blackberries, and I wanted to skip the food coloring. (The strawberry cake relies on a few drops of red food color for a pretty pink.)

For the cake, I used a recipe by Stella Parks at SeriousEats.com. Parks explains the science of this cake's color and oh-so-tender crumb much better than I ever could. Read all about it here: arkansasonline.com/622color/.

So I opted for a basic buttercream with blackberry puree added.

As Parks explains, this cake's color and texture are dependent on several factors — the type of flour and the temperature of the ingredients are crucial to its success — so avoid straying too much. The recipe assumes the ambient temperature of your kitchen is between 70 and 74 degrees. If your kitchen is warmer, chill your mixing bowl before making this batter.

[Video not showing above? Click here to watch: arkansasonline.com/622burner]

Reserve a small handful of blackberries. Using a blender, food processor or immersion blender, puree the remaining blackberries until totally smooth. Measure out exactly 6 ounces fresh blackberry puree (about ¾ cup; 170 g) and bring to about 70 degrees before using. Save the remaining puree for the buttercream.

Adjust oven rack to lower-middle position and heat to 350 degrees. Lightly grease an 8- by 2-inch or 8- by 3-inch anodized aluminum cake pan and line with parchment paper. (Parks uses a round pan; I opted for square.)

In the bowl of a stand mixer fitted with a paddle attachment, combine the butter, sugar, baking powder, baking soda, salt and cinnamon. Mix on low speed to roughly incorporate, then increase to medium and beat until fluffy and light, about 5 minutes. About halfway through, pause to scrape bowl, beater and spatula. With mixer still running, add egg whites a little at a time, letting each addition fully incorporate before proceeding to the next.

Scrape bowl and beater with flexible spatula and resume mixing on medium speed for about 3 seconds to ensure everything is well combined. The batter should look bright purple and register between 65 and 68 degrees on a digital thermometer. (Mine was 70 degrees. Parks says, "Significant deviation indicates ingredients were too warm or too cold, which can lead to textural problems with the cake." But she offers no suggestions for adjustment.) If the batter looks streaky or tie-dyed, gently fold with a flexible spatula until streaks disappear.

Scrape batter into the prepared pan, spread into an even layer, and bake until puffed and firm, about 30 minutes. Cool directly in pan for 1 hour, then run a butter knife around the edges to loosen. Invert onto a wire rack, peel off parchment, and place on a serving plate until fully cool, about 1 hour, before frosting.

For the blackberry buttercream:

If desired, juice the lemon half and stir the juice into the reserved blackberry puree. (The lemon juice will help keep the color vibrant.) Pass mixture through a fine-mesh sieve. You should have about ¼ cup seedless puree.

Smooth over top and sides of cooled cake.