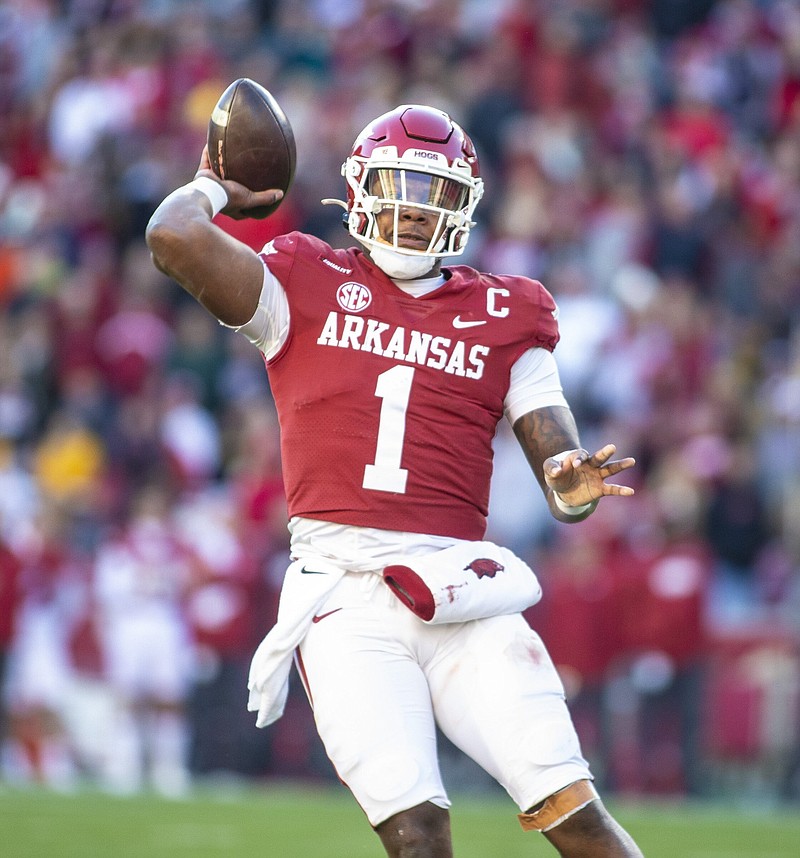 Arkansas Quarterback KJ Jefferson (1) passing the ball on Friday, Nov. 26 2021, during the first half of play at Reynolds Razorback Stadium, Fayetteville. Visit nwaonline.com/211027Daily/ for today's photo gallery..(Special to the NWA Democrat-Gazette/David Beach)

FAYETTEVILLE -- University of Arkansas junior KJ Jefferson is among the college quarterbacks who will serve as counselors at the Manning Passing Academy this week.

The Academy, at which the Manning family members and college quarterbacks work with junior high and high school players, will begin Thursday at Nicholls State University in Thibodaux, La.

This is the 26th year of the Academy, which began in 1996 and is run by Archie Manning and his sons Peyton, Eli and Cooper.

Jefferson, from Sardis, Miss., will be a counselor for the first time. He was an obvious choice to be invited after leading the Razorbacks to a 9-4 record last season when he started every game and completed 198 of 294 passes (67.3%) for 2,676 yards and 21 touchdowns with 4 interceptions and rushed for 664 yards and 6 touchdowns.

"I'm excited, coming from where I come from, that's a big-time deal," Jefferson said Tuesday of being among the counselors. "Just being able to be selected for that is truly an honor."

"I'm looking forward to going down there and participating and having fun."

This year's Manning Academy will have a record 45 college quarterbacks as counselors for the 1,350 campers.

"It's a really good group," Archie Manning told Nola.com. "I usually cut it off at 40 counselors, but we had so many guys that wanted to come this year that I couldn't say no. I'm getting to be a softie."

There will be quarterbacks from 12 of the SEC's 14 schools.

"It's always fun to get to know the guys and build relationships with the quarterbacks in our conference, and other conferences as well," Jefferson said. "On Saturday, we know we're competing with each other, but it's all love at the end of the day.

"Being able to be down there with those guys, and talk ball and talk different knowledge of the game, and pick each other's brains, it's always good.

"It's always good to be around other quarterbacks with elite talent and see what they know."

Cooper Manning was going to play receiver at Ole Miss before retiring from football because of a spinal condition.

"It's always a family affair," Archie Manning told Nola.com. "One of the things I'm most proud of is that Cooper, Peyton and Eli have not missed one minute of the camp in 25 years."

Jefferson said he attended some Ole Miss games when he played at North Panola High School and got to meet Eli and Peyton Manning. He said he met Archie Manning through his high school coach, Carl Diffee.

"They're really cool," Jefferson said of the Mannings. "It's easy to have a conversation with them.

"I'm looking forward to being able to learn from those guys, learning about what it takes to get to the next level and to also be successful at the next level.

"I want to go down there and be a sponge and soak up all the knowledge I can."

Other college quarterbacks who will serve as counselors with ties to the state are Texas State's Layne Hatcher and Eastern Michigan's Taylor Powell.

Hatcher, who is from Little Rock and starred at Pulaski Academy High School, played at Arkansas State University for three seasons after redshirting at Alabama.

Powell, a standout at Fayetteville High School, played at Troy last season after beginning his college career at Missouri.

The college quarterbacks will take part in a skills competition at 8:30 p.m Friday at John L Guidry Stadium. They'll go through a series of drills, according to Nola.com, to gauge their accuracy, arm strength and route throwing versatility. The event is open to the public. Admission is $15.

"I remember when I first started this camp," Archie Manning told Nola.com. "Everybody said it was going to be nothing but a recruiting camp for Tennessee and Ole Miss.

"We don't want anything to do with recruiting at this camp. Our goal is not to develop college or pro quarterbacks. Our mission is to enhance the high school football experience."

Jefferson worked at a youth camp Tuesday in Fayetteville along with Arkansas teammates Jalen Catalon and Jadon Haselwood that was sponsored by Old Spice and Walmart.

Speaking with the kids, Jefferson said, reminded him of camps he attended when he was their age.

"I thank my parents and my coaches also for bringing me out and getting a chance to be in an environment like this," Jefferson said. "Just learning from the older guys that worked at the camps I attended.

"I told them to have fun. Just encourage each other, show each other some love and have fun.

"That's the main thing, have fun and meet new people and build relationships."

That's what Jefferson plans to do at the Manning Passing Academy as well.

The 26th annual Manning Passing Academy (MPA), which begins Thursday at Nicholls State University in Thibodaux, La., will have 12 SEC quarterbacks among its 45 counselors, including University of Arkansas junior KJ Jefferson.

Here is a rundown of the SEC quarterbacks, in alphabetical order, at the MPA as well as two with ties to the state of Arkansas:

%Hatcher is from Little Rock. He played at Pulaski Academy High School and Arkansas State University after redshirting at Alabama.

#Powell is from Fayetteville High School. He played previously at Missouri and Troy.