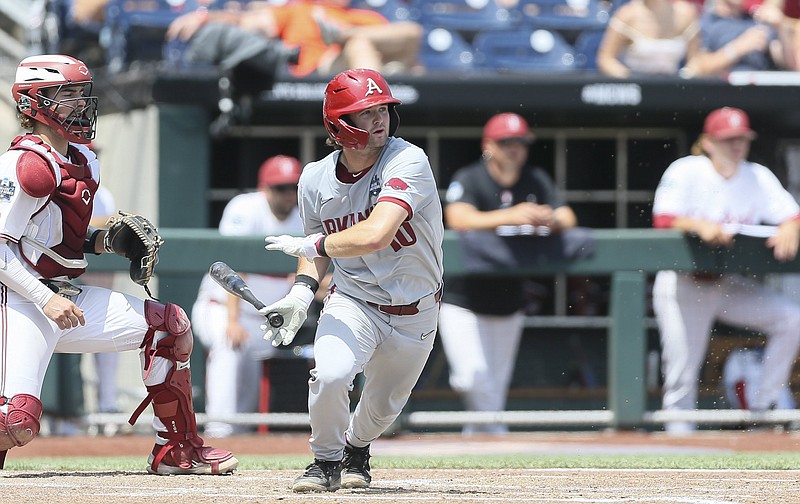 Arkansas infielder Peyton Stovall (10) bats Saturday during the fifth inning of the NCAA College World Series at Charles Schwab Field in Omaha, Neb. Stovall has hit .467 with 9 runs scored and 7 RBIs to lead a Razorbacks lineup that has been hot throughout the NCAA Tournament. - Photo by Charlie Kaijo of NWA Democrat-Gazette

Alderman reached on a leadoff single against Taylor and that will force Dave Van Horn to bring in Tygart from the bullpen.

Tygart lost control of a breaking ball and hit his first batter to put the tying run on first with nobody out. Ole Miss has now loaded the bases after back-to-back hit batters. LHP Zack Morris is coming on to attempt to escape the jam for the Razorbacks.

Morris recovers from falling behind 2-0 and gets a huge strikeout. A shallow popout is caught in left field by Jace Bohrofen who just barely avoided a catastrophic collision with Battles.

An infield single makes it a one-run game. A soft liner to left field is caught by Bohrofen and the Hogs force a rematch tomorrow.

The Razorbacks went down in order in the ninth. They are three outs away from forcing a rematch against Ole Miss tomorrow.

With two lefties due up for the Rebels, Taylor returns to the mound for the Razorbacks. He induced a groundout from Gonzalez and struck out Elko. Kevin Graham popped out to shortstop.

Taylor has surrendered just one hit through three scoreless innings of relief.

Cayden Wallace smoked a liner that was too hot for the third baseman to handle and slid into second base for a double. The call stood but was not confirmed on a play that was as close as possible.

Michael Turner shot a ground ball through the gap in the left side of the infield and Wallace scored.

Three Razorbacks reach in a row after a sneaky bunt single by Lanzilli. After a sac bunt by Moore, the Rebels intentionally walked Battles to load the bases for Slavens with one out.

Arkansas stranded the bases loaded after swinging strikeouts by Slavens and Kendall Diggs who was pinch-hitting for Gregory.

Arkansas' pitching has been lights out all night. Taylor recorded another 1-2-3 inning for the Hogs.

RHP Brady Tygart is warming up in the bullpen, presumably for the final two frames.

Slavens reached on a leadoff single but was stranded after Washburn recorded the next three hitters.

Gregory's sacrifice bunt failed as Slavens was thrown out at second. Webb struck out swinging and Stovall grounded out.

He picked up where Smith left off by getting two more strikeouts in another scoreless frame.

Gaddis is relieved by RHP Jack Washburn who struck out the first two hitters he faced.

Moore drew a two-out walk but Battles' line drive was caught by Justin Bench in centerfield.

Smith walked Gonzalez to put the tying run on first for Elko with two outs. He got down in the count 3-1 but managed to get the Ole Miss slugger to fly out to right field.

The Arkansas starter has allowed just 2 hits and 4 walks while racking up 8 strikeouts on 90 pitches.

Webb reached on a walk with one out but was stranded after a strikeout of Stovall and a fielder's choice by Wallace.

Alderman got the best of Smith once again with a leadoff single this time. However, the freshman lefty struck out the side for the second time in a row.

Smith is up to eight punchouts tonight. The Razorback defenders have been largely absent from action as the last eight outs have come via strikeouts.

Gaddis records his first 1-2-3 inning of the evening.

Lanzilli and Moore grounded out. Moore was called out on a bang-bang play at first that was confirmed after an Arkansas challenge.

Battles struck out to end the frame.

Smith issued a leadoff walk on four pitches but recovered to strike out the side. He's struck out 5 hitters through 3 innings.

Turner squared a ball into dead center but it was right at the Rebels' centerfielder.

Kemp Alderman ties the game at one. He gave a 1-1 fastball a ride into the bullpen in left field.

Smith retired the next two batters without issue before surrendering a walk to 8-hole hitter Garrett Wood. The Razorback lefty struck out Calvin Harris to strand the runner.

Chris Lanzilli launched a leadoff home run that bounced off the top of the wall. The blast was confirmed after a replay review.

Robert Moore flew out to center and Jalen Battles grounded out to third. Brady Slavens drew a four-pitch walk with two outs but was stranded after an infield popout by Zack Gregory.

Smith made quick work of the first two Rebels but issued a walk to Tim Elko to extend the inning.

He got Kevin Graham to fly out to center to end the frame.

Braydon Webb smacked the second pitch from Gaddis to the wall in left field for a double. He was left stranded after a strike out of Peyton Stovall and a pair of flyouts from Cayden Wallace and Michael Turner.

It's the first time the Razorbacks have been held scoreless in the first inning at the College World Series this year.