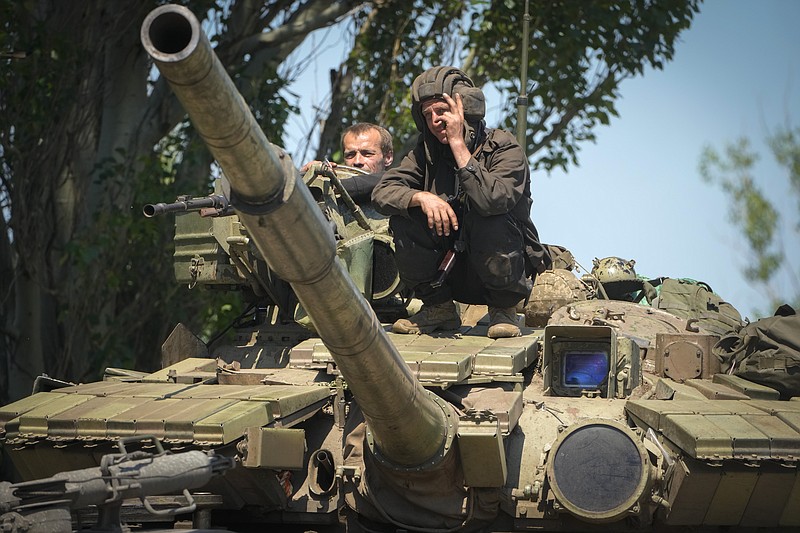 KYIV, Ukraine -- Russian attacks laid down a curtain of fire Tuesday across areas of eastern Ukraine where pockets of resistance are denying Moscow full military control of the region, almost four months after the Kremlin unleashed its invasion.

"Today everything that can burn is on fire," Serhiy Haidai, the governor of Ukraine's eastern Luhansk region, told The Associated Press.

Russia's war has caused alarm over food supplies from Ukraine to the rest of the world and gas supplies from Russia, as well as raising questions about security in Western Europe.

The Russian military currently controls about 95% of the Luhansk region. But Moscow has struggled for weeks to overrun it completely, despite deploying additional troops and possessing a massive advantage in military assets.

"With the help of tactical movements, the Ukrainian army is strengthening defenses in the Luhansk region," Ukrainian President Volodymyr Zelenskyy said in his nightly video address. "That really is where the toughest situation is now."

In the city of Sievierodonetsk, the hot spot of the fighting, Ukrainian defenders held on to the Azot chemical plant in the industrial outskirts. About 500 civilians are sheltering at the plant, and Haidai said the Russian forces are turning the area "into ruins."

"It is a sheer catastrophe," Haidai told the AP in written comments about the plant. "Our positions are being fired at from howitzers, multiple rocket launchers, large-caliber artillery, missile strikes."

The defense of the chemical plant recalled the besieged Azovstal steel mill in the brutalized city of Mariupol, where Ukrainian troops were pinned down for weeks.

Neighboring Lysychansk, the only city in the Luhansk region that is still fully under Ukrainian control, also was targeted by multiple airstrikes.

The airstrikes on Sievierodonetsk and Lysychansk ruined more than 10 residential buildings and a police station. In the city of Avdiivka in the Donetsk region, a school burned down as the result of the shelling, the president's office said. The Luhansk and Donetsk regions make up the Donbas.

Zelenskyy said the attacks in the Kharkiv region were especially "cruel and cynical" because they brought no clear benefit to the Russian forces.

"The Russian army is deaf to any rationality. It simply destroys, simply kills, and in this way it shows its command that it is not really standing in place," he said in his video address.

"The country is now going through another series of trials," he said, expressing confidence that Russia will overcome all the challenges.

"There is no doubt that we will become even stronger," he added.

Poland's foreign minister said Tuesday the current security crisis on the continent shows that Europe can't defend itself without the United States, but that NATO members in the region should take more responsibility for their own protection.

"Poland perceives the engagement of the United States in European security as a fundamental condition of peace in Europe," Foreign Minister Zbigniew Rau told a gathering of Polish ambassadors, in comments carried by the state news agency PAP.

He credited U.S. leadership in NATO as being key to a decision for a "rapid and effective adaptation to the Russian threat in 2016."

It was then that NATO increased its presence on the eastern flank of NATO following Russia's seizure of Ukraine's Crimea Peninsula in 2014 and its support for pro-Moscow insurgents in Ukraine's eastern Donbas region.

After the invasion, the U.S. this year deployed more soldiers to Poland and is using the country as a hub for weapons going to help the Ukrainians.

"The current crisis clearly shows that without the United States, Europe cannot defend itself," Rau said.

He expressed gratitude to Washington, but said it shouldn't have to take "all the responsibility," which also "rests on the shoulders" of European allies.

Also, geopolitical tensions stemming from Russia's invasion returned to Lithuania. Due to European Union sanctions on Moscow, the Baltic country earlier this month banned rail traffic from crossing its territory from Russia to the Russian exclave of Kaliningrad.

Kaliningrad, with a population of around 430,000 people, is wedged between Lithuania and Poland, both EU countries, and is isolated from the rest of Russia.

Nikolai Patrushev, the powerful secretary of the Kremlin's Security Council and a hardliner, visited Kaliningrad on Tuesday and vowed to respond to the ban.

"The relevant measures are being drawn up in an interagency format and will be adopted shortly," Patrushev said, without elaborating. "Their consequences will have a significant negative impact on the population of Lithuania."

The U.S. State Department confirmed the death of a U.S. citizen in Ukraine who is believed to be only the second American to have been killed while fighting in the conflict.

Stephen Zabielski died in Ukraine and the department is in touch with his family to provide consular support and assistance, it said Tuesday.

"Out of respect to the family during this difficult time, we have nothing further," it said.

The department did not provide a date or the circumstances of his death but an obituary published in his hometown newspaper said Zabielski, 53, had died on May 15. The Recorder in Amsterdam, N.Y., where Zabielski had lived until 2018, said he had been killed while fighting in the village of Dorozhniank, Ukraine.

Zabielski is at least the second American to have been killed in combat in Ukraine. In late April, Willy Joseph Cancel, a 22-year-old former Marine from Tennessee, was killed.

In brief comments about Zabielski, the State Department reiterated longstanding advice it has given to Americans not to travel to Ukraine for any reason due to the fighting.

Meanwhile, John Kirby, a national security spokesman for the White House, said it was "appalling" that the Kremlin suggested two Americans captured by Russian forces in Ukraine could be sentenced to death.

Kirby declined to say what steps the U.S. would take if Russia does not treat Alex Drueke and Andy Huynh, both from Alabama, as prisoners of war under the Geneva Conventions.

Kremlin spokesman Dmitry Peskov said "it depends on the investigation," when asked during an NBC interview whether the Americans could be sentenced to death like two Britons and a Moroccan captured while fighting for Ukraine.

A court in the Russian capital on Tuesday extended the arrest of a municipal legislator charged with discrediting the country's military after his criticism of Russia's military action in Ukraine.

Gorinov, a member of the municipal council of Moscow's Krasnoselsky District, has remained in jail since his arrest in April. He was accused of discrediting the country's military after speaking out against Russia's military action in Ukraine during the council's session in March.

Addressing the court on Tuesday, Gorinov rejected the charges and insisted that he was merely expressing his political views, noting that "what I said was my personal opinion and belief."

He may face a fine or a prison term of up to 10 years if convicted.

Gorinov's lawyers asked the court to release him from jail and put him under house arrest, noting that he was suffering from tuberculosis, but the court dismissed the appeal and ruled that Gorinov should remain in jail until Nov. 19.

Gorinov is the first municipal legislator to face trial on charges of discrediting the country's armed forces -- a new criminal article introduced after the start of the Russian campaign in Ukraine that the government describes as a "special military operation." Critics of the Kremlin have denounced it as part of authorities' efforts to stifle dissent and control the message.

He said his agenda for today is just as full.

"We are expanding the circle of those who support Ukraine's candidacy and making it more likely that Friday's decision will be positive," he said.

"This has undermined the viability of Russia's original operational design for the invasion, which involved holding the Odesa region at risk from the sea," the report states.

Russian authorities blocked the website of British newspaper The Telegraph over an article it published, the internet rights group Roskomsvoboda reported Tuesday.

It said Russia's media and internet regulator, Roskomnadzor, blocked Russian access to a story that alleged that Russian forces had prepared a mobile crematorium for use in its war with Ukraine, possibly to hide its military casualties. The move made the entire Telegraph website inaccessible for some Russians.

Information for this article was contributed by Yuras Karmanau, John Leicester, David Keyton, Francesca Ebel and staff members of The Associated Press. 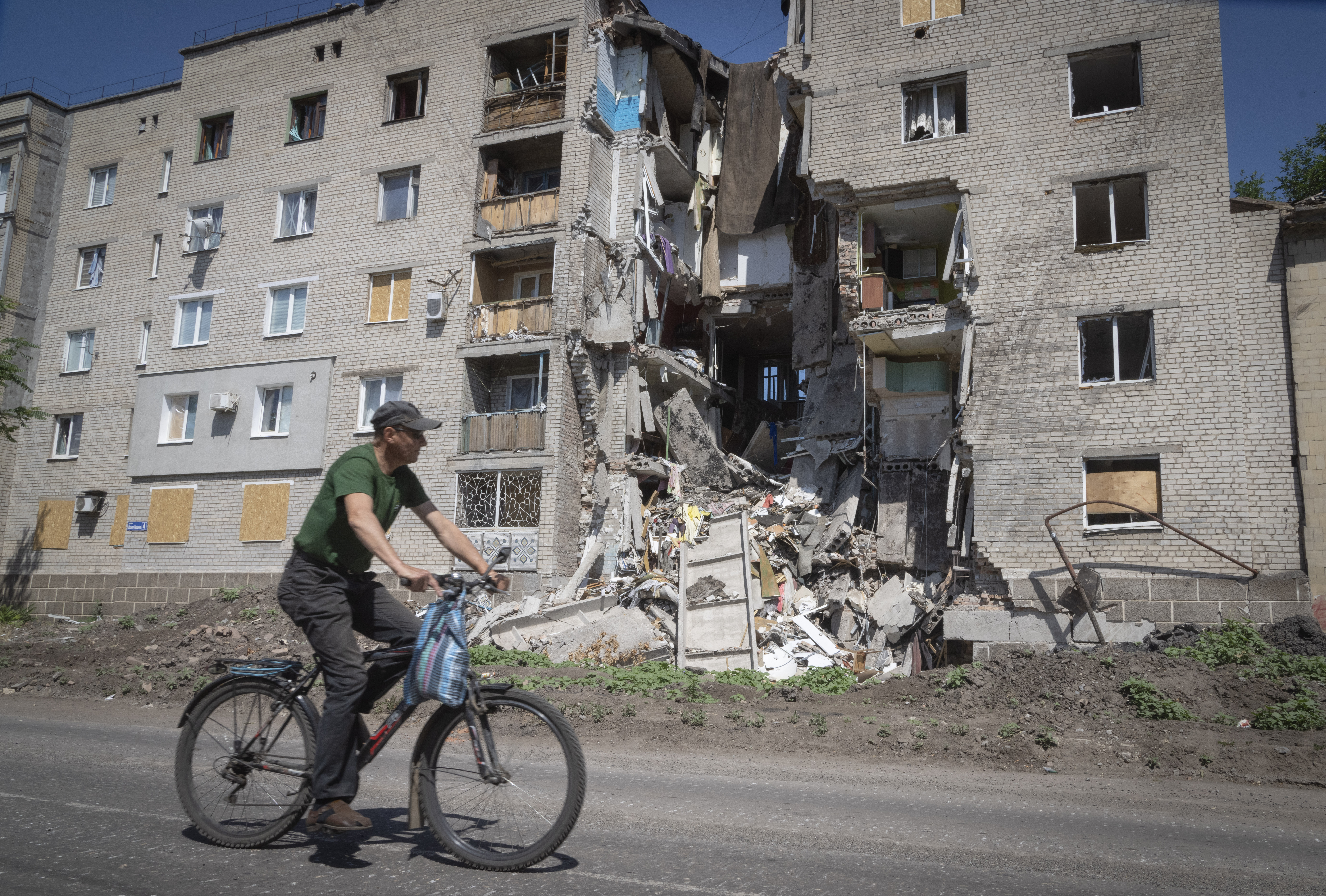 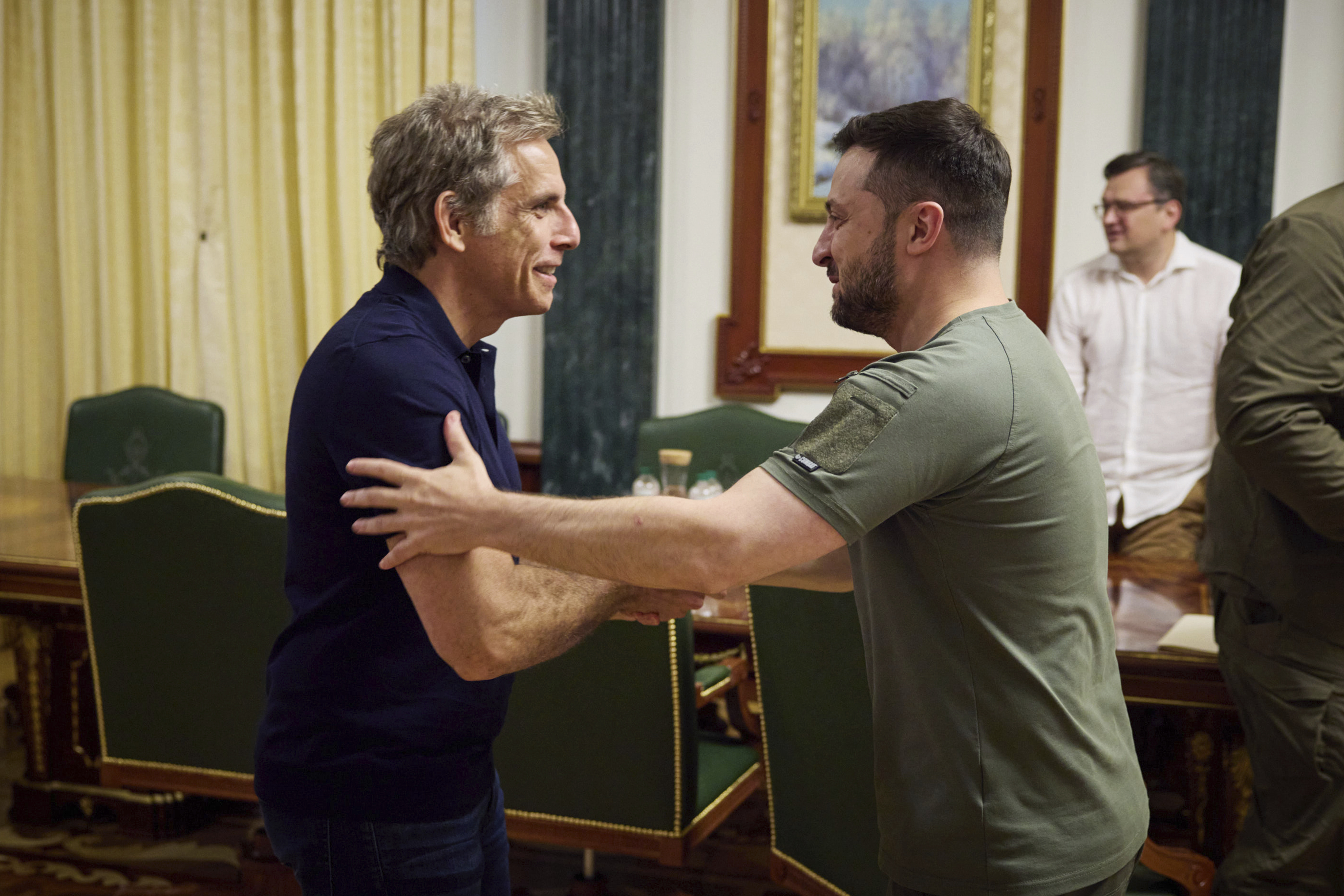 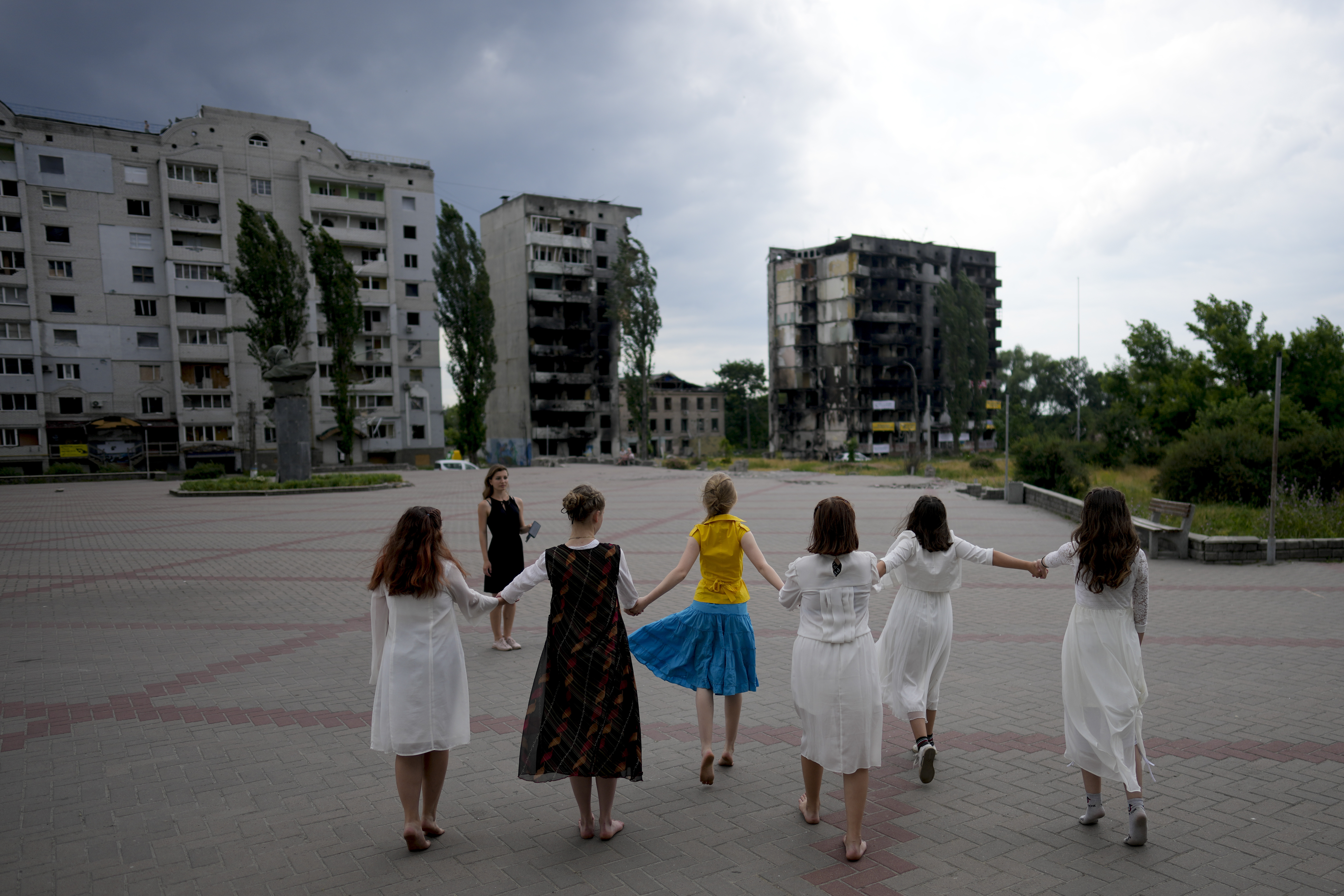 Girls dance near a building destroyed in Russian attacks, in Borodyanka, on the outskirts of Kyiv, Ukraine, Tuesday, June 21, 2022. (AP Photo/Natacha Pisarenko) 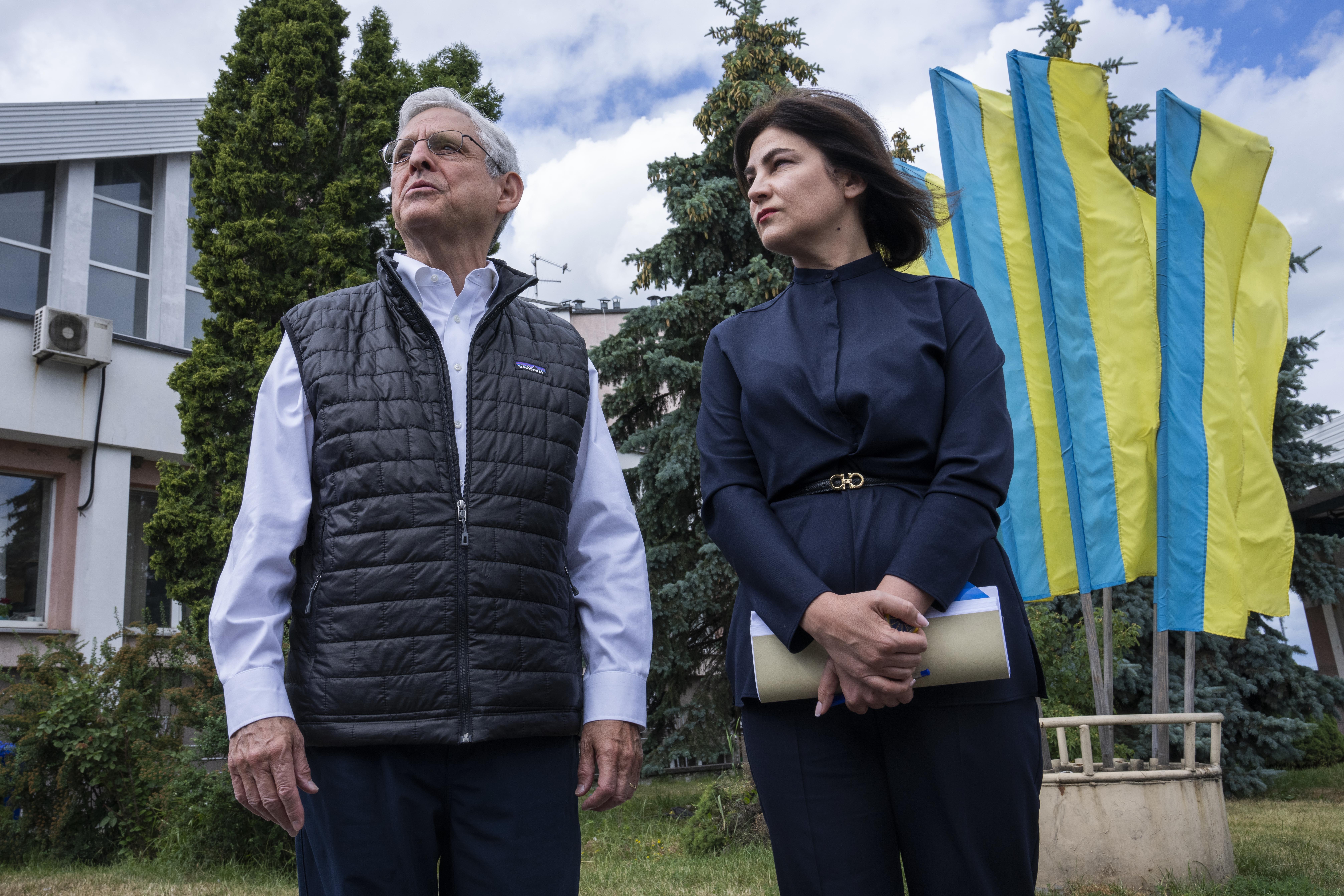 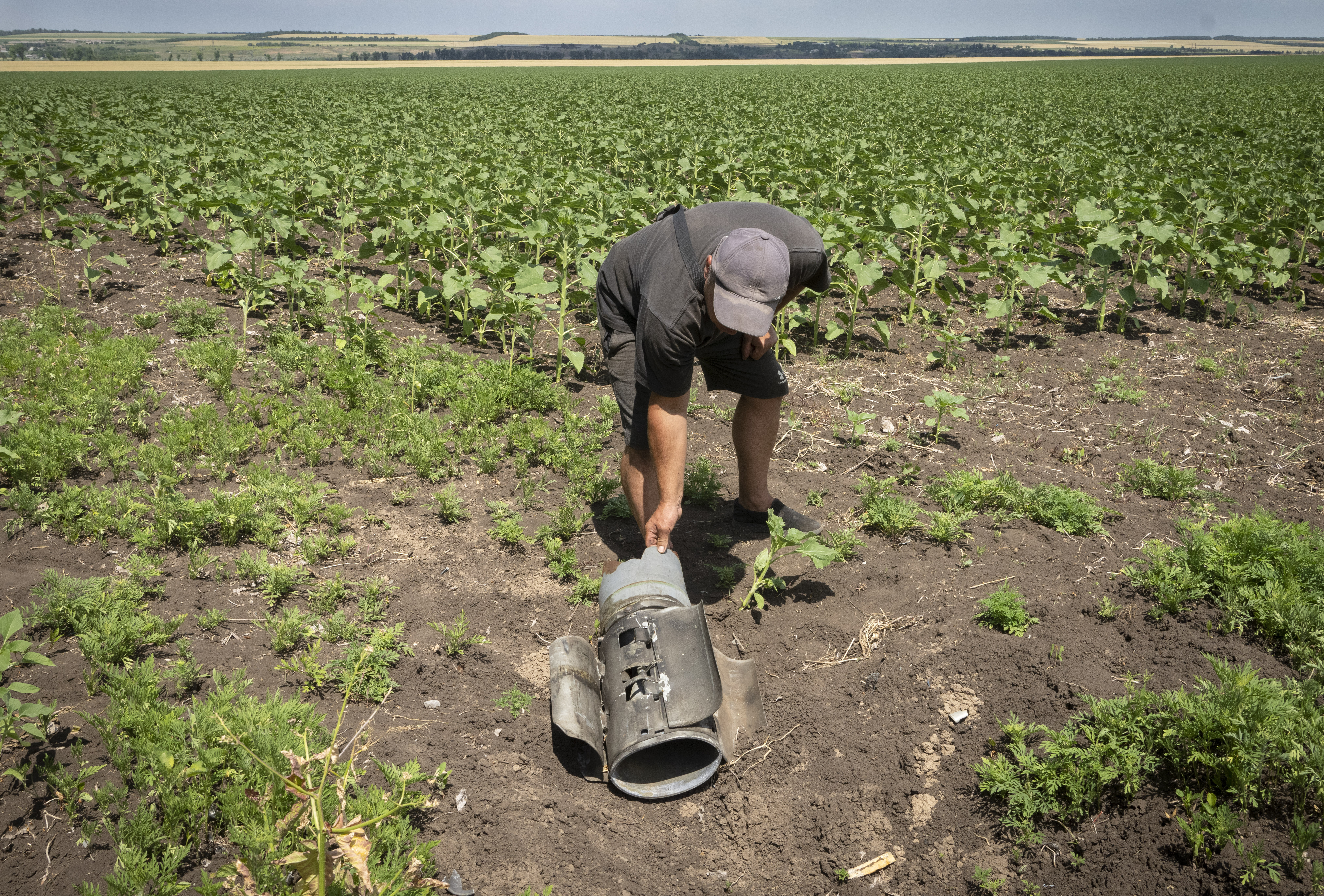 A farmer inspects a Russian rocket fragment after shelling on a sunflower field in Donetsk region, Ukraine, Tuesday, June 21, 2022. Russian hostilities in Ukraine are preventing grain from leaving the "breadbasket of the world" and making food more expensive across the globe, threatening to worsen shortages, hunger and political instability in developing countries. (AP Photo/Efrem Lukatsky) 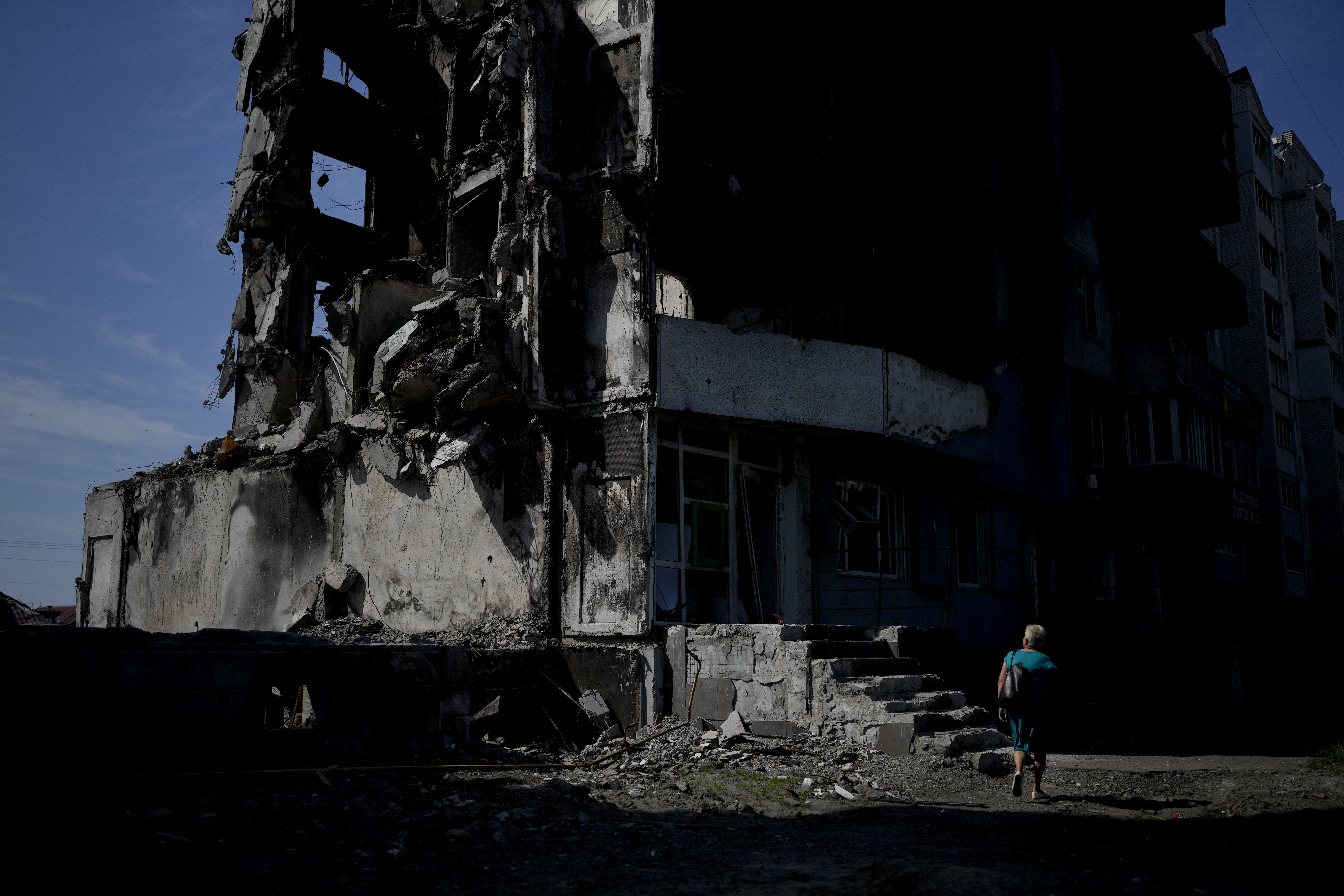 A woman walks past a building destroyed in Russian shelling in Borodyanka, on the outskirts of Kyiv, Ukraine, Tuesday, June 21, 2022. (AP Photo/Natacha Pisarenko)