Plaza work still on despite delays 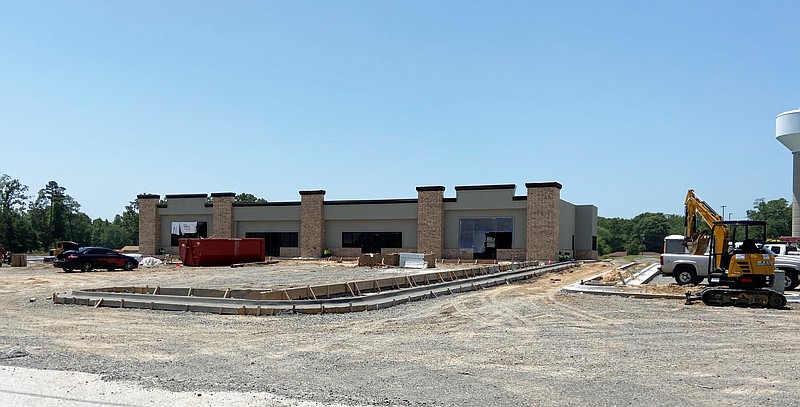 Construction on the White Hall Plaza on Sheridan Road is expected to be completed by early fall. The plaza will house two restaurants, Moe’s Southwest Grill and Schlotzsky’s. (Special to The Commercial/Deborah Horn)

It's located on Sheridan Road east of Interstate 530, Exit 34, and next to Dairy Queen at 7810 Sheridan Road.

The Patel family is the investor and developer on this project. Umesh Patel, principal developer, said despite some material delivery delays, the project is on schedule and slated to open late summer or early fall.

The single-story structure is approximately 10,000 square feet and was custom designed to house two national chain restaurants, Moe's Southwest Grill and Schlotzsky's, with dine-in and drive-thru options for customers.

The restaurants will be located on either end of the plaza, with two entrance-exit ramps located on Sheridan Road to handle drive-thru traffic.

Patel said he's received a lot of positive response about the inclusion of the two restaurants at the plaza.

When opened, these will be Arkansas's seventh Moe's location and the 11th Schlotzsky's location, according to their websites.

"We're trying to support the town, build up the town in a positive way," Patel said.

Some of his business ventures included Dairy Queen, Holiday Inn Express, TownePlace Suites by Marriott, which is currently under construction, and Colton's Steak House, which he sold to new owners. These businesses are all located on Sheridan Road.

"Many small towns are drying up, but our town is on the upswing," Spadoni said. "This is exciting news for White Hall. It's a good indication of what's to come."

Like many of the city's new and planned businesses, the White Hall Plaza will be located on the city's western edge.

Across Sheridan Road from the plaza, Simmons Bank is building a new, second White Hall branch, while across I-530 on the same street, Relyance Bank is building its new three-story, 40,000 square foot headquarters.

Relyance's move-in target date is a few weeks away. Across the street from Relyance Bank, Patel is building TownePlace Suites by Marriott with an opening date of late summer or early fall. The four-story, 80-room hotel will offer extended stay options to patrons.

In late January, Jefferson Regional Medical Center announced plans for a new rehabilitation and behavioral health hospital that will be located on the city's western edge, north of the Sheridan Road development.

Being built through a partnership with LifePoint Health, the new facility will be named Jefferson Regional Specialty Hospital. It will be constructed on existing hospital property close to the White Hall Health Complex, which is located at 1600 W. Holland Ave.