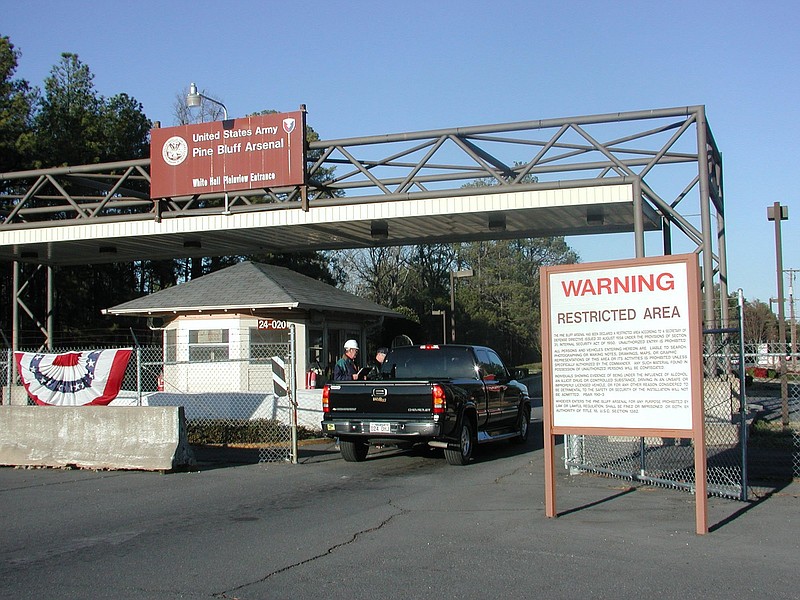 A file photo shows the Plainview Gate at the Pine Bluff Arsenal. (Special to The Commercial/Deborah Horn)

The U.S. Department of the Army recently designated the Pine Bluff Arsenal a Center for Industrial and Technical Excellence (CITE) for Textile Manufacturing.

This is the Arsenal's third CITE designation, having received honors for Chemical and Biological Defense Equipment in 2005 and Smoke Ammunition in 2017.

The Arsenal is the only installation within Joint Munitions Command to have three CITE designations, according to a news release.

"We have room to grow," said Roch Byrne, deputy to the arsenal commander. "With minimal investment, we can continue to bolster domestic textile and personal protective equipment manufacturing within the organic industrial base and provide value to our nation's warfighter."

In 2015, the Arsenal established a textile production capability for specialty chemical, biological, radiological and nuclear personal protective (CBRN) textile items. At that time, no capability existed with the government for CBRN textiles.

In 2020, the Arsenal entered into a strategic public private partnership with ReadyOne Industries, an AbilityOne Contractor, to produce the Joint Service Lightweight Integrated Suit Technology, or JSLIS. This is the first partnership of its kind at the Arsenal utilizing both direct sales and land usage.

With this partnership, the Arsenal increased the skill sets needed to cut and sew more complicated textiles and garments via partner training, according to the release.

"No other partnership has a direct collaboration between government and non-government workers," said Justin Lieber, Arsenal director of business operations and planning. "This partnership was unique because we could not find any other time it had ever been done inside the government. We never found an example we could replicate."