Ashdown lefty: No regrets with ‘22 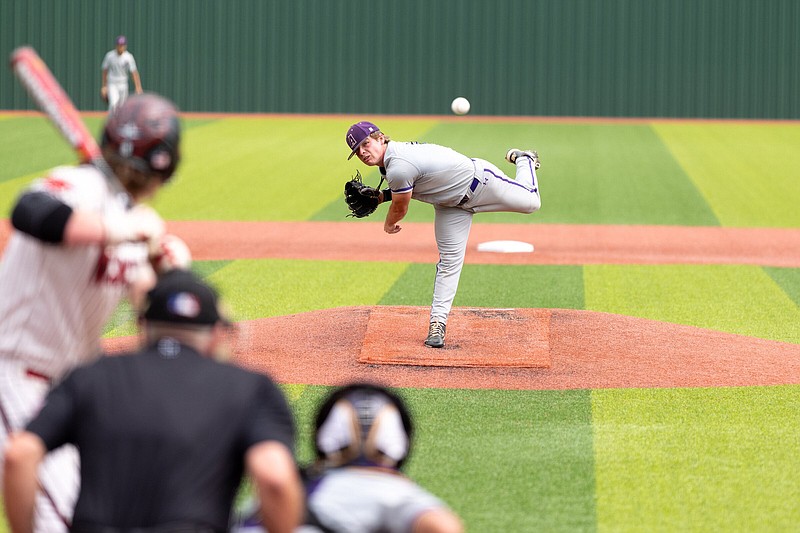 Pitcher Alex Keilbach said he has no regrets about his playing days at Ashdown, particularly after coming up a few runs short in this past season’s Class 3A state title game. “I left it all out there on the field, so I don’t have any regrets,” Keilbach said. (Arkansas Democrat-Gazette/Justin Cunningham)

Coming up a few runs short in this past season's Class 3A state baseball title game doesn't exactly qualify as a regret, according to Alex Keilbach.

As a matter of fact, the All-State pitcher insists there's nothing he laments about his playing days at Ashdown, especially during his senior year. The way he sees it, there's no reason for him to rue anything.

"I left it all out there on the field, so I don't have any regrets," he said. "Honestly, I think our entire team gave it all we had and worked as hard as we could whenever and wherever we played. We would've loved to finish it off with a championship, but sometimes things just don't go your way."

Things usually went Keilbach's way in his final go-around with the Panthers, and he's hoping to continue that trend Friday when he steps on the mound at Bear Stadium for the Arkansas High School Coaches Association All-Star baseball game on the University of Central Arkansas campus in Conway. First pitch is scheduled for 4 p.m., and Keilbach is anxious to play.

With the sparkling career he put forth at Ashdown, the game will serve as a fitting conclusion for the Henderson State University commit.

"I want to just take it all in," he said. "I don't want to go in nervous and waste it all on nerves. I want to go in and have fun. That's what the game is for this weekend, to have fun in one last high school game.

"It's crazy, though, because it felt like just last year that I was that freshman coming in trying to earn a spot. Now, I'm done, and I'm just looking to have fun and enjoy the experience."

Keilbach accounted for more than 2,000 yards of offense and nearly 30 touchdowns last fall when he quarterbacked the Panthers to a 9-3 record and a spot in the second round of the Class 4A state playoffs, but it was on the baseball diamond where he shined even brighter.

The 5-11, 185-pound left-hander went 10-1 this past season for the Panthers, who went 26-7 and came within two innings of winning their first state championship. Ashdown took a 2-0 lead into the fifth inning before eventually dropping a 4-2 decision to two-time champion Harding Academy in the Class 3A final.

Keilbach allowed 1 earned run on 5 hits in 5 innings while hitting an RBI single to help the Panthers throw a scare into the Wildcats who had won 25 consecutive games beforehand. He came into that game riding a 10-game winning streak -- one that included a no-hitter against Fouke -- and was more than pumped about the opportunity to bring a trophy back to Ashdown.

Still, Charles Cross, who was the Panthers' coach at the time, revealed that Keilbach often wondered if he could've done more.

"His competitive spirit is second to none," said Cross, who recently resigned to become an assistant golf coach at Texarkana, Texas. "He told me afterwards that he wished he'd had his best stuff in that game, but to hold that Harding team down for that long, that was tremendous. He's one of those kids that wants the coaches and everybody to know that he's doing his best, doing all he can to help his teammates out.

"He's always the one that stays and takes extra swings in the cage. ... He's going to always put in the work. He's just a super kid, one of the best that I've ever been around."

That work ethic was one that Keilbach himself tried to instill in his fellow Panthers, particularly his classmates.

"We all talked at the beginning of the year and told each other that this was our last year together," he said. "We even talked to the freshmen about it as well. And we were like, 'If there's anything they were holding in the tank for next year, don't do it.' [2022] was our last year, and we wanted to just let everything out.

"We didn't want to have any regrets whatsoever. We told them don't skip the voluntary the [batting practices] or anything like that because at the end of the year, if we came up short, that'd be something they'd look at and question. But the team did the best they could and worked as hard as they could."

Yet, the work is far from done for Keilbach. He's expected to be an integral part of the pitching staff for Henderson State, which won a school-record 40 games, advanced to a second straight NCAA Central Regional and ended No. 21 in the final Collegiate Baseball Division II poll in the spring.

"But pitching year-round for him, it's gonna help him out. Usually when we shut down baseball, he went straight to football. Now, he'll be able to work on strictly pitching, and it'll be a gamechanger for him."