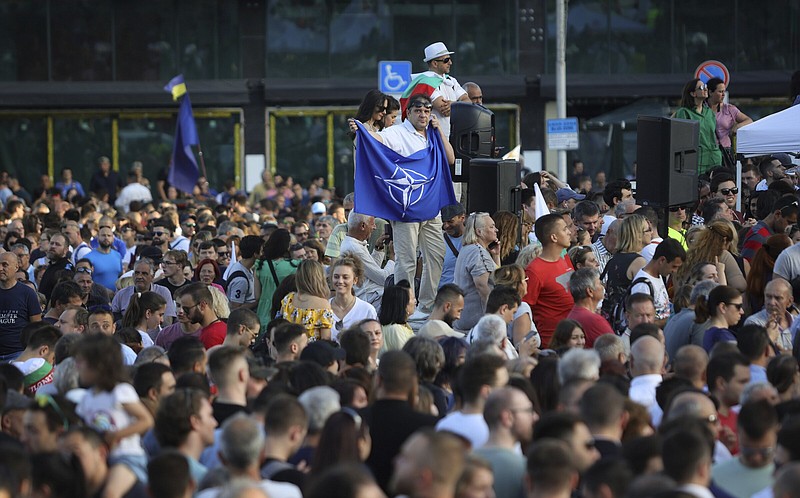 A demonstrator holds a NATO flag during a rally Wednesday in support of the incumbent government in front of the Parliament building in Sofia, Bulgaria. (AP/Valentina Petrova)

SOFIA, Bulgaria -- Lawmakers in Bulgaria have approved a no-confidence motion against the country's coalition government that could topple the centrist prime minister and further stall efforts by Balkan countries to join the European Union.

The center-right opposition party GERB filed the motion last week, accusing the government of mishandling public finances and economic policy and failing to tackle rising inflation. The no-confidence vote passed 123-116 with no abstentions.

Prime Minister Kiril Petkov, a Harvard-educated businessman, formed a four-party coalition government in December. He has pushed for a resolution to a bilateral ethno-cultural dispute that has blocked North Macedonia and Albania's bids to join the EU.

Bulgarian President Rumen Radev can either install a caretaker government or call an early parliamentary election, which would be the country's fourth in a little more than a year.

Petkov's coalition controls 109 of parliament's 240 seats after a populist partner party, There is Such a People, withdrew its support this month due to similar fiscal complaints and Bulgaria's relations with neighboring North Macedonia over an unresolved ethno-cultural dispute.

In his televised national address, the 81-year-old Sheikh Meshal Al Ahmed Al Jaber said that while the ruling family respected Kuwait's constitution that grants the country's rowdy parliament more power than elsewhere in the autocratic region of Persian Gulf sheikhdoms, popular dissatisfaction over the deepening dysfunction compelled the emir to intervene.

"Our goal with this constitutional solution is the firm and sincere desire for the people themselves to have the final say in the process of correcting the political course anew by choosing who represents the right choice," said Sheikh Meshal, who assumed most of the emir's responsibilities last year.

The country's Cabinet resigned over two months ago over disputes with Parliament, resulting in a prolonged paralysis. Over a dozen Kuwaiti lawmakers began a sit-in last week inside the parliamentary chamber to press for a new government and voice their opposition to the worsening political crisis that has blocked economic and social progress in the country.

The Australian Electoral Commission on Wednesday declared the Victoria state seat of Cooper was the 77th won by Labor in the 151-seat House of Representatives where parties need to control a majority to form government.

The opposition conservative Liberal Party was later declared the winner of the Western Australia state seat of O'Connor.

Labor's narrow majority means that the government will not have to negotiate with the opposition or unaligned lawmakers to get legislation through the lower chamber.

But that is not the case in the Senate, where Labor holds only 26 of the 76 seats.

If Labor got all 12 senators from the minor Greens party to support legislation, the government would only need to persuade one of the six remaining independent or unaligned legislators to reach a majority. The environmentally focused Greens held only nine seats in the previous Senate.

The Rail, Maritime and Transport Union accused the government of "wrecking" Wednesday's talks and said the 24-hour walkout by 40,000 cleaners, signalers, maintenance workers and station staff would go ahead as planned. The union's action this week is Britain's biggest and most disruptive railway strike for 30 years.

Rail infrastructure company Network Rail said it was "disappointed that the RMT have again chosen to walk away from negotiations. We remain available for talks, day or night."

The union held a daylong strike on Tuesday that brought the U.K. rail network to a crawl, with only a fifth of passenger services running. Another walkout is planned for Saturday.

The dispute centers on pay, working conditions and job security as Britain's railway companies aim to cut costs and staffing after two years in which emergency government funding kept them afloat.

The strike pits the union against 13 privately owned railway-operating companies and the government-owned National Rail. While Britain's Conservative government insists it is not involved in the dispute, the union notes that it plays a major role in the heavily regulated industry. 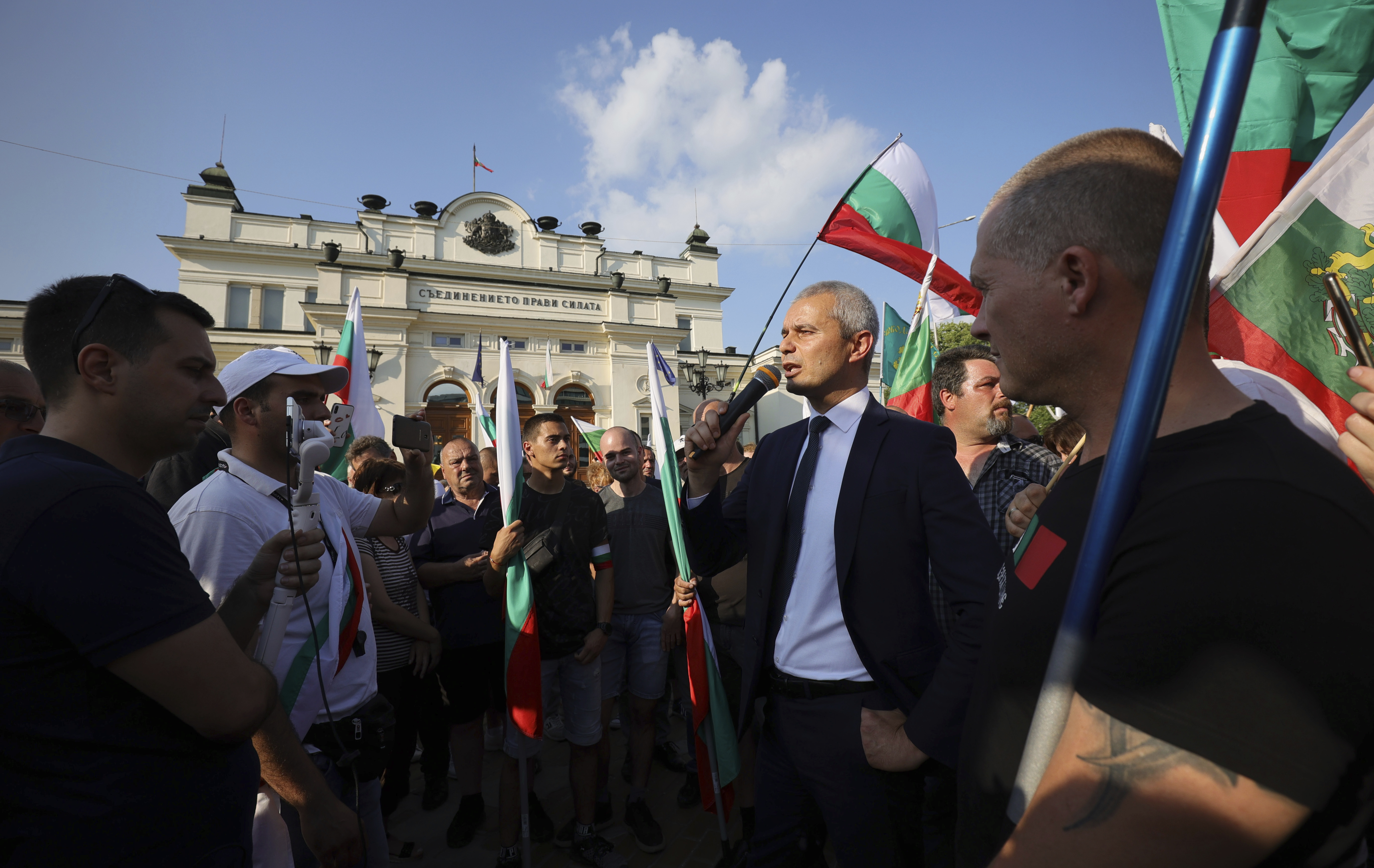 Leader of pro-Russian Vazrazhdane party Kostadin Kostadinov speaks to his supporters during an anti-government demonstration in front of the Bulgarian Parliament building in Sofia, Tuesday, June 21, 2022. Bulgarian lawmakers have started debating a no-confidence motion against the minority government, on the eve of the vote that could well topple centrist Prime Minister Kiril Petkov, elected just months ago on pledges to fight corruption. (AP Photo/Valentina Petrova) 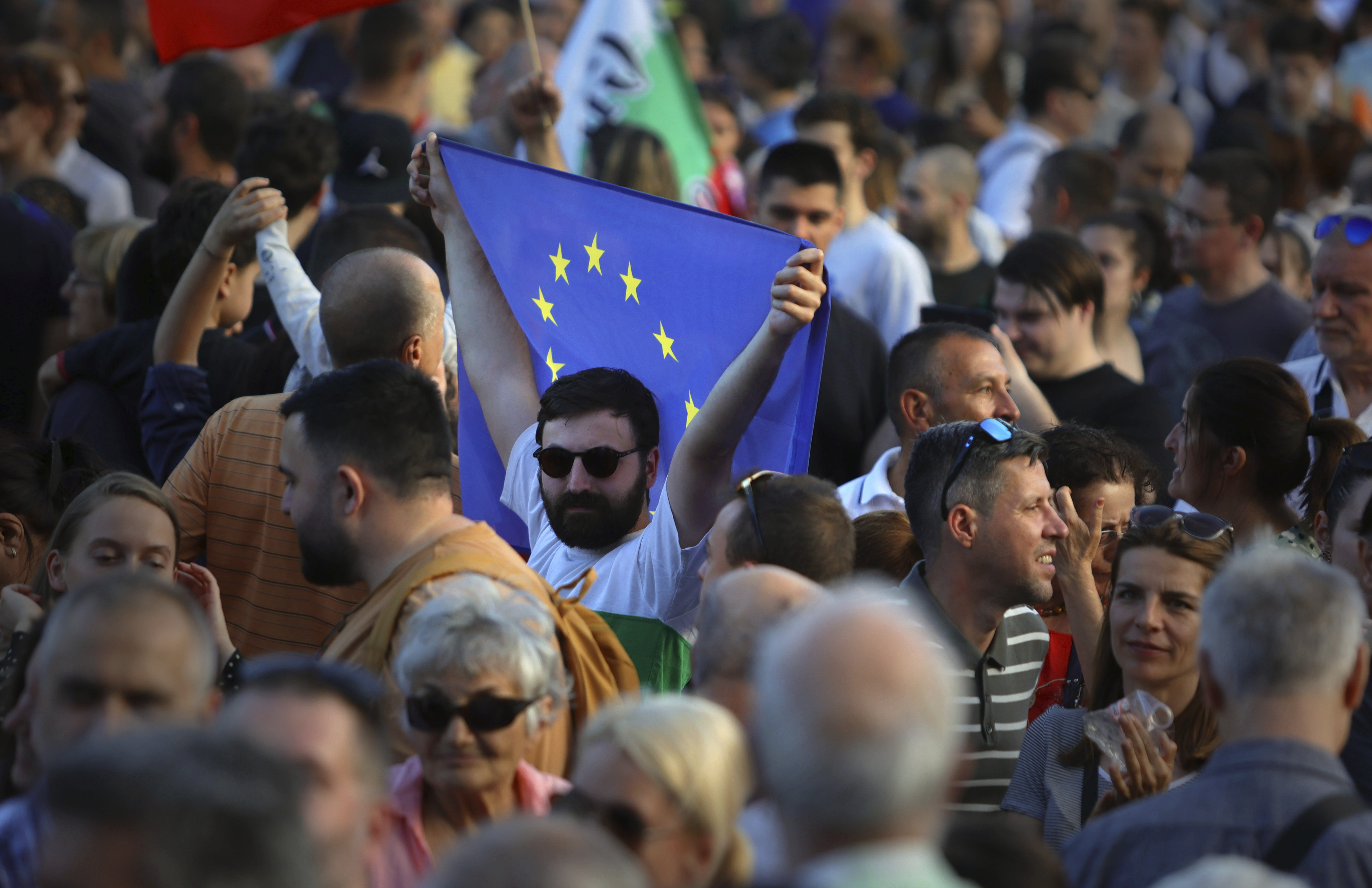 A pro-government protester holds EU flag during demonstration in support of incumbent Bulgarian government near the Bulgarian Parliament building in Sofia, Tuesday, June 21, 2022. Bulgarian lawmakers have started debating a no-confidence motion against the minority government, on the eve of the vote that could well topple centrist Prime Minister Kiril Petkov, elected just months ago on pledges to fight corruption. (AP Photo/Valentina Petrova) 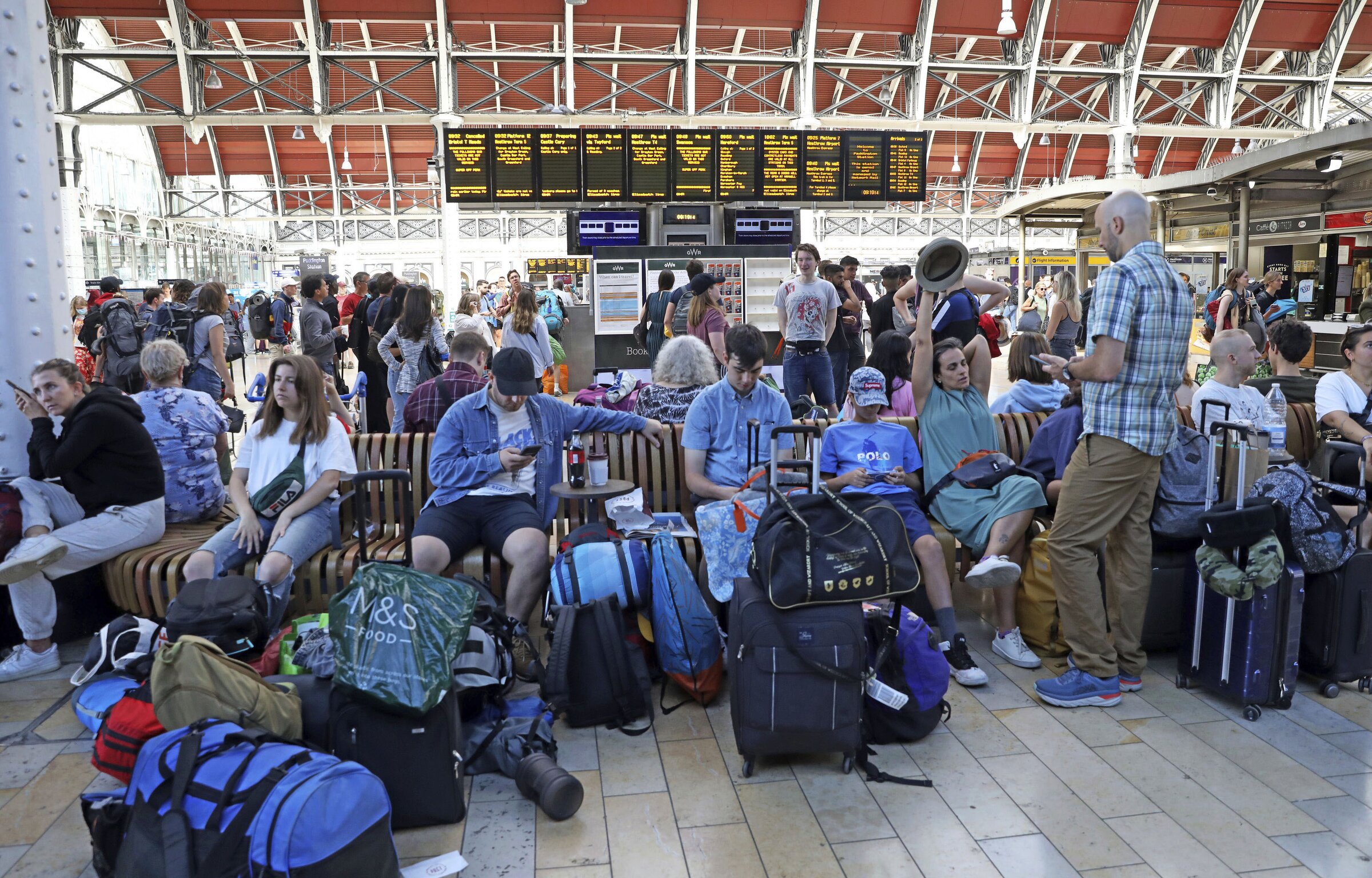 Passengers bound for the Glastonbury Festival wait at Paddington station Wednesday as train services continue to be disrupted after the nationwide strike by members of the Rail, Maritime and Transport union along with London Underground workers in a bitter dispute over pay, jobs and conditions, in London. (AP/PA/Ashlee Ruggels)