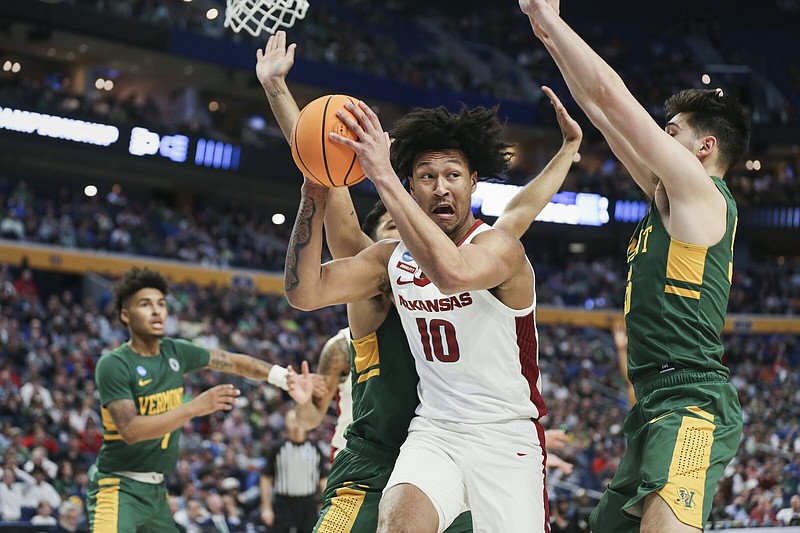 Fort Smith’s Jaylin Williams, who averaged 10.9 points and 9.8 rebounds for Arkansas last season, is projected by many analysts to be taken in tonight’s NBA Draft, possibly late in the first round. (NWA Democrat-Gazette/Charlie Kaijo)

FAYETTEVILLE -- Jaylin Williams was among the University of Arkansas basketball players who attended an NBA Draft watch party at Coach Eric Musselman's house last year to see which team would select Moses Moody.

Moody, a 6-6 guard from Little Rock, became the first one-and-done Razorback to be drafted in the first round when the Golden State Warriors picked him No. 14 overall.

The Razorbacks all wore "Who's Next?" T-Shirts.

"I'm hoping we're all next, the whole team," Williams said with a smile looking ahead to the 2022 draft. "I'm hoping we can all go next year."

Turns out Williams wasn't kidding about himself.

Williams, a 6-10 forward from Fort Smith who earned first-team All-SEC honors last season as a sophomore, will be watching the draft tonight to see where he's picked.

After two seasons with the Razorbacks, Williams decided to keep his name in the draft following a good showing at the NBA Scouting Combine in Chicago.

Williams' draft stock appears to be on the rise based on calls Musselman said he's been receiving from NBA teams in the past week.

Musselman said he got a call from an NBA general manager about Williams and also was contacted by officials of teams considering trading up.

"They were the most significant phone calls I have personally received about Jaylin," said Musselman, a former NBA head coach with Golden State and Sacramento. "They were real phone calls. They were not from scouts. ... They were decision-makers. I think that's good when that starts happening."

Williams is projected as a second-round pick in most mock drafts, but CBS Sports analyst Kyle Boone lists him as a late first-round pick going to the Miami Heat at No. 27. The Sporting News has Williams going No. 31 -- the first pick of the second round -- to the Indiana Pacers.

Draft projections for Williams as a second-rounder include:

• No. 34 to the Oklahoma City Thunder (ESPN.com and NBADraft.net)

• No. 38 to the San Antonio Spurs (Bleacher Report and Yahoo! Sports)

• No. 48 to the Minnesota Timberwolves (Basketball News).

"I don't really want to speculate on where anybody is going to get drafted," Musselman said. "It's hard to say [where Williams will be picked], because teams are still finagling for trades."

In SEC play, Williams averaged 13.6 points and 10.2 rebounds. He set career-highs with 22 points at Alabama and 16 rebounds against Tennessee.

"The draft takes on wacky twists and turns that nobody ever expects to happen," Musselman said. "I'm just hopeful that he goes to an organization that really values what he is as a player."

Every NBA team scouted Williams at the combine, and among the teams he has worked out for include Miami, San Antonio, the Atlanta Hawks, Chicago Bulls, Dallas Mavericks, Milwaukee Bucks and Phoenix Suns. The Suns don't have a draft pick this year, but could acquire one through a trade.

Former Razorbacks who have worked out for NBA teams and likely will sign as free agents are guards JD Notae, Stanley Umude and Au'Diese Toney.