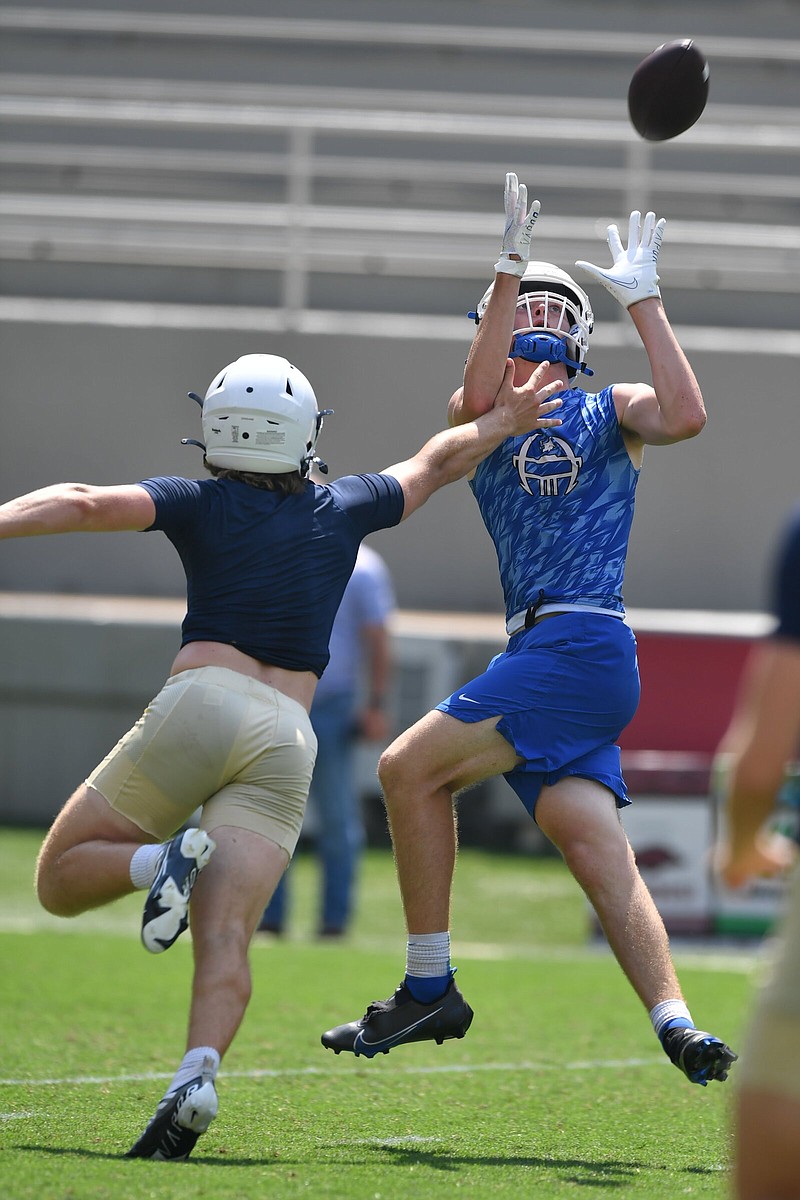 FAYETTEVILLE -- East St. Louis claimed dominance Wednesday in SEC country and there was no one around to refute the claim.

Especially players from the high school teams the Flyers had just defeated.

East St. Louis beat Little Rock Mills 34-0 to win the championship in a 7-on-7 tournament at the University of Arkansas where games we played simultaneously at Donald W. Reynolds Stadium, the Walker Indoor facility, and the Razorbacks south practice field. The win on the Razorbacks home field came after East St. Louis won similar 7-on-7 tournaments at Baton Rogue, La., and Oxford, Miss, where the LSU Tigers and Ole Miss Rebels play.

While East St. Louis players held up three fingers signifying a 3-0 sweep through the South in 7-on-7 play, East St. Louis coach Darren Sunklett was more subdued about his team's accomplishments.

"We come out here over the summer just to work on our concepts," said Sunklett, whose team finished second last fall during the playoffs in Missouri's largest classification. "It's all about your passing concepts and your defensive concepts. We all know you play football with your linemen and, when we put them all together, we think we're going to be fine."

Teams from Northwest Arkansas reached the semifinals before being ousted in the single-elimination tournament. Shiloh Christian fell 28-19 to East St. Louis while Bentonville West lost 21-10 to Mills.

The event drew 18 teams from six different states and provided teams from Arkansas with a final opportunity to compete before a two-week dead period begins on Saturday. Rogers beat Edwardsville, Ill. 21-19 before losing 21-12 to Bentonville West in a matchup of 7A-West Conference schools.

"We've had a really busy month and our kids are tired," Harbison said. "We went hard. But we're trying to get those pieces put together so when we come back in July, we'll have a pretty good idea where we're headed."

Wednesday's activities included a morning session where University of Arkansas Offensive Line Coach Cody Kennedy and some Razorbacks players worked with offensive and defensive linemen for the high schools teams. Trey LaValle, co-offensive line coach for Bentonville West said the sessions were beneficial for the 18 lineman for the Wolverines who went through the drills.