Country’s election workers being hounded out of jobs by JULIE CARR SMYTH The Associated Press | June 23, 2022 at 3:53 a.m. 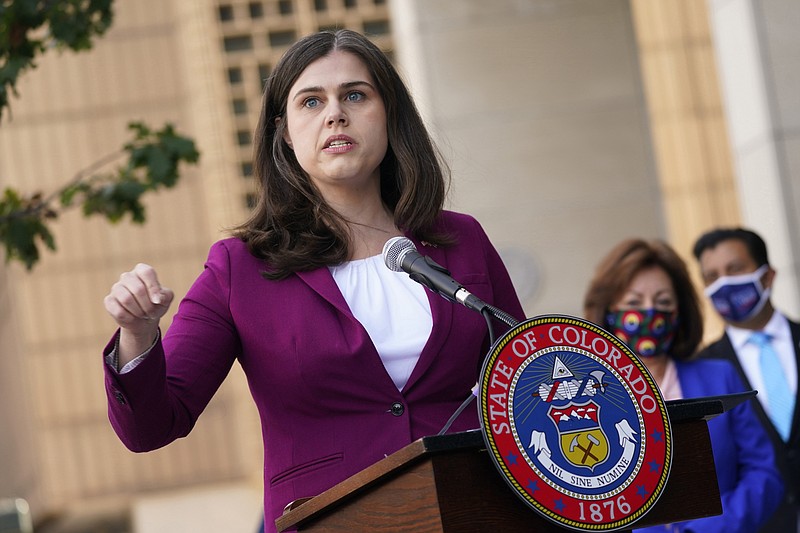 FILE - Colorado Secretary of State Jena Griswold speaks during a news conference in Denver on Oct. 15, 2020. This week’s gripping testimony about threats to election officials by former President Donald Trump and his followers had a rapt audience outside Washington -- secretaries of state and election clerks across the country who said the stories could very well have been their own. (AP Photo/David Zalubowski, File)

COLUMBUS, Ohio -- This week's gripping testimony to Congress about threats to local election officials after the 2020 presidential election had a rapt audience far beyond Washington -- secretaries of state and election clerks across the U.S. who said the stories could easily have been their own.

Death threats, harassment and unfounded accusations have driven local election officials from their jobs, unprecedented attacks that many say threaten not just themselves but American democracy itself.

A day after the local election office in Medford, Ore., certified the results from the 2020 election, workers found a message spray-painted on their parking lot: "Vote Don't Work. Next Time Bullets."

"We spent the rest of the day pretty much in shock that this had happened here," Jackson County Clerk Chris Walker testified during a hearing earlier this year on state legislation to protect election workers. "The noise happening around the country had hit home."

At Tuesday's hearing of the House committee investigating President Donald Trump's role in the Jan. 6, 2021, insurrection at the U.S. Capitol, a mother and daughter who were election workers in Georgia brought the sense of danger into stark relief. They testified they feared even to say their names in public after Trump wrongly accused them of voter fraud.

"There were a lot of threats wishing death upon me," said Wandrea "Shaye" Moss, the daughter.

Georgia was a center of threats to election officials as Trump and his allies challenged his loss there to Joe Biden and as Trump mounted a pressure campaign on the secretary of state to "find" enough votes to say he'd won.

In Gwinnett County, northeast of Atlanta, a contract worker with Dominion Voting Systems faced death threats after someone shot video of him transferring a report to a county computer. Widely shared online posts falsely claimed the young man was manipulating election data.

That led Gabriel Sterling, the chief operating officer for the Georgia secretary of state's office, to lash out angrily against the violent threats and false rhetoric in a December 2020 news conference, a moment he recalled during Tuesday's congressional hearing.

Other misinformation targeted the suburban county, including claims that an electronics recycling truck disposing of surplus equipment outside a county office was shredding election hard drives.

The "exhaustion" of that political environment combined with the coronavirus pandemic and a new voting system drove more than half of Gwinnett County's permanent election staff to resign after the 2020 election, Elections Supervisor Zach Manifold said.

After it was over, he said, "I think they just all took a deep breath and a lot of people were like, 'Yeah, I just don't think I can do this anymore.'"

He said the department has rebuilt, but lacks the institutional knowledge about elections it once had.

Similar stories can be found across the country.

In Northern California's Nevada County, a politically mixed region in the Sierra foothills east of Sacramento, a judge agreed to issue restraining orders earlier this year against residents who had charged past security into the county's election office, demanding an update on their efforts to recall members of the board of supervisors.

Crystal Roascio, the elections administrator in Carbon County, Montana, explained why the county stepped up election security during the state's June 7 primary.

"I have election judges terrified for their safety and have even had some resign from being a judge over this," Roascio said in an email.

A survey released in March by the Brennan Center for Justice at the New York University School of Law found that one in three election officials knew someone who has left a job in part because of threats and intimidation, and that one in six had experienced threats personally.

Citing the potential effect on democracy, the U.S. Department of Justice launched a task force nearly a year ago to  address rising threats against election officials. Public Integrity Section Principal Deputy Chief John Keller described it in an email to reporters as a "deeply disturbing trend."

"Do you feel safe?" Travis Ford said, according to court documents. "You shouldn't."

Jena Griswold, the secretary of state, said those making the threats are trying to stop her and others from doing their work to protect fair and free elections.

The U.S. Election Assistance Commission earlier this month voted unanimously to expand use of its funding to protect election workers and officials against threats. Amid the barrage, some in Congress also are pursuing solutions.

In addition to at least a dozen bills introduced or passed at the state level, legislation introduced in Congress last year by Democrats would make it a federal crime for any person to intimidate or threaten an election worker. It was part of a larger Democratic-led effort on voting rights that cleared the House but then was stopped by a filibuster in the Senate. A separate bill that would protect election and poll workers was introduced in February.

Outlawing election threats would cover cases like some in Arizona, where officials since 2020 have fielded threatening phone calls and messages that escalated during a partisan audit of the election results in the state's largest county.

Maricopa County Recorder Stephen Richer received expletive-laden voicemails calling him "scum" and a "traitor," threatening him with citizen's arrests and telling him he would burn in hell.

One caller told him if he gave the Republican-backed contractors performing the audit any more trouble, he'd "never make it" to his "next little board meeting."

Richer said he referred some of the messages to law enforcement and deleted his Facebook account when people started using it to find and harass his wife.

Jocelyn Benson, Michigan secretary of state, knows those types of threats all too well. She was among the election officials personally threatened after Trump spread his false claims of widespread election fraud.

In a statement issued after Tuesday's congressional hearing, she said election workers sign up for the job because they care about democracy. But she, her staff and many of the hundreds of local officials throughout Michigan have been targeted, resulting in "an omnipresent feeling of anxiety and dread that permeates our daily lives, and our families' lives."

Information for this article was contributed by Christina A. Cassidy and Ali Swenson of The Associated Press. 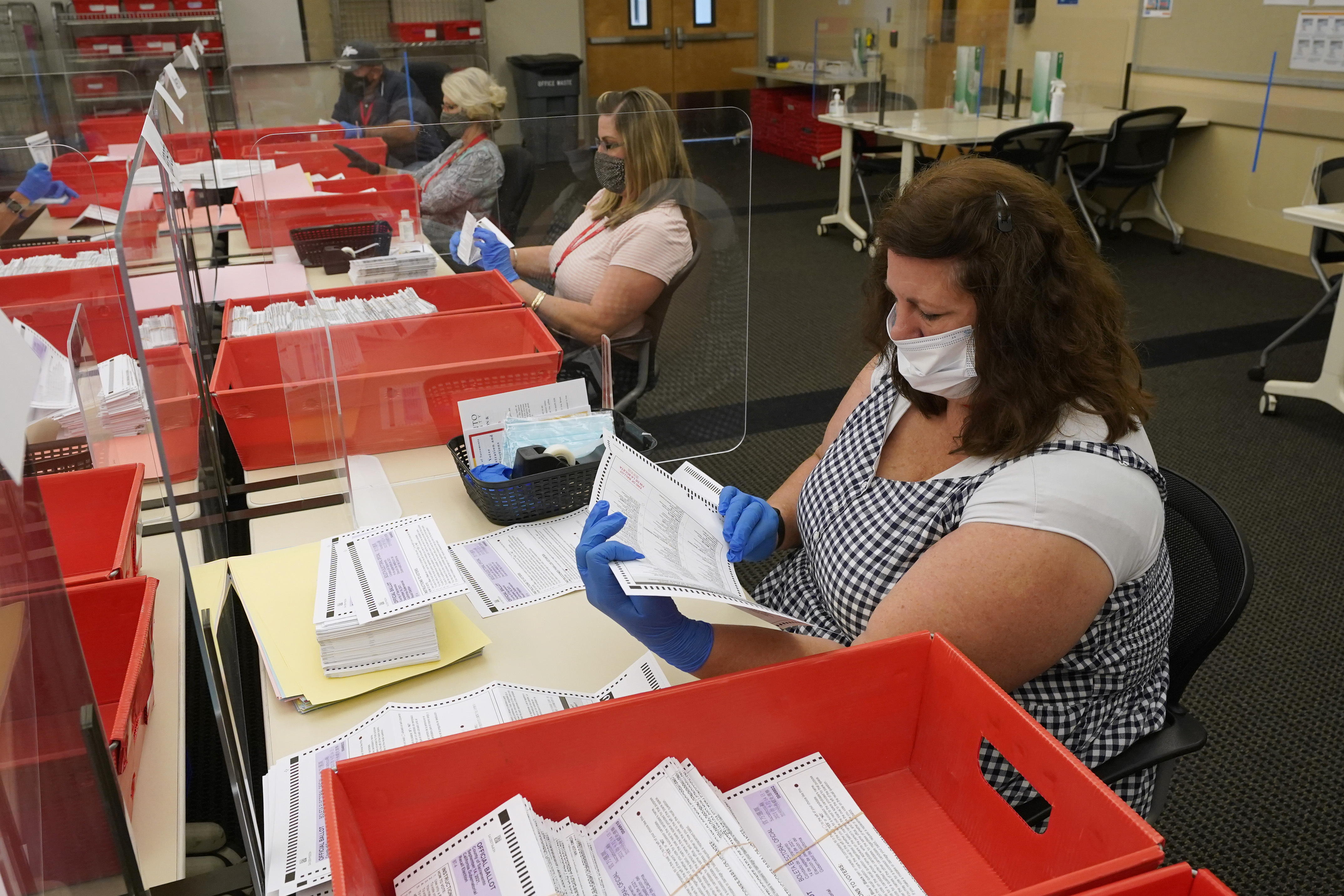 FILE — Election workers inspect ballots that have been received for the Sept. 14, recall election, for damage at the Sacramento County Registrar of Voters office in Sacramento, Calif., Aug. 30, 2021. This week’s gripping testimony about threats to election officials by former President Donald Trump and his followers had a rapt audience outside Washington -- secretaries of state and election clerks across the country who said the stories could very well have been their own. (AP Photo/Rich Pedroncelli, File) 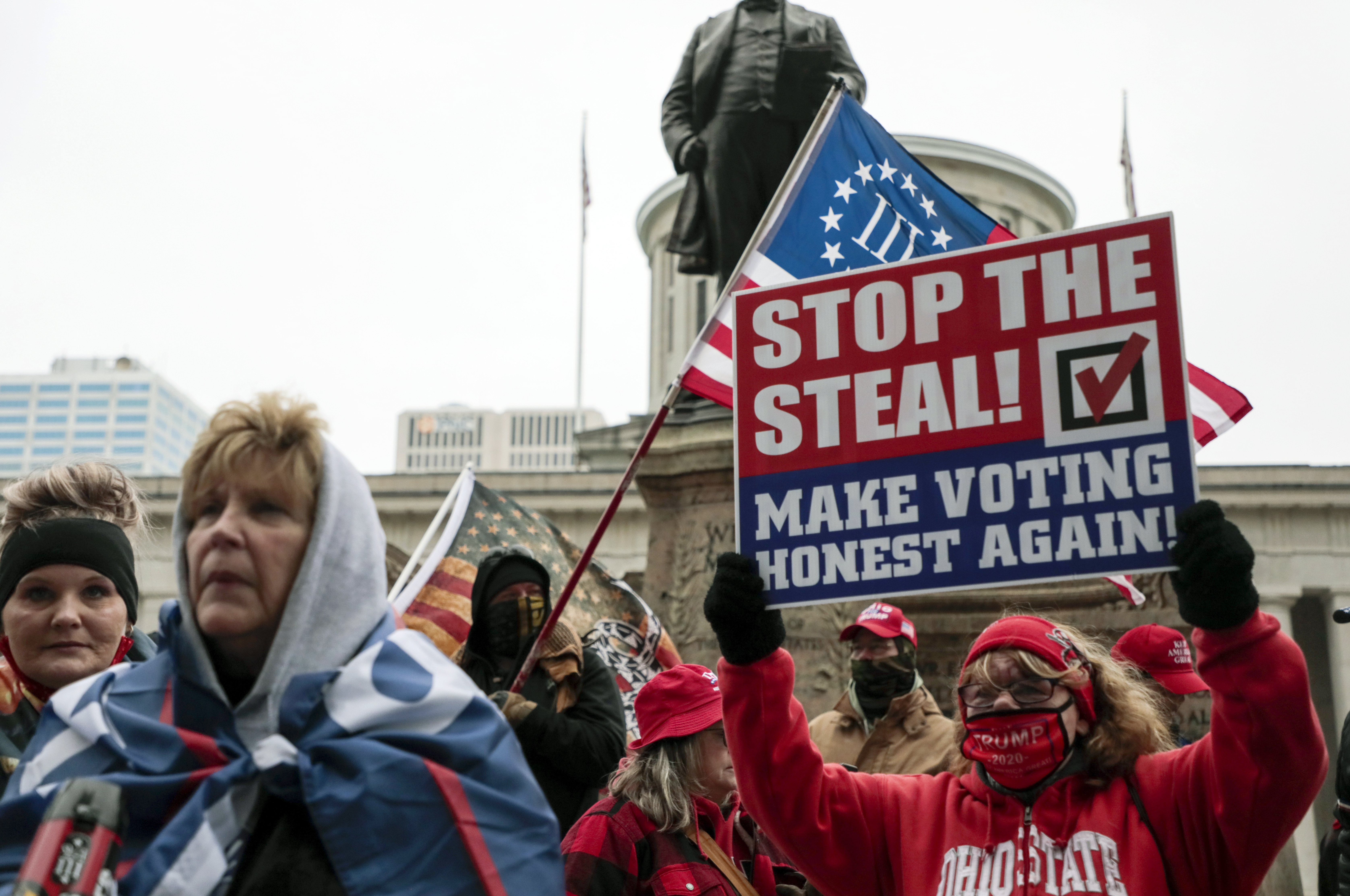 FILE - Supporters of President Donald Trump demonstrate during a rally on, Jan. 6, 2021, at the Ohio Statehouse in Columbus, Ohio. This week’s gripping testimony about threats to election officials by former President Donald Trump and his followers had a rapt audience outside Washington -- secretaries of state and election clerks across the country who said the stories could very well have been their own. (Joshua A. Bickel/The Columbus Dispatch via AP, File)