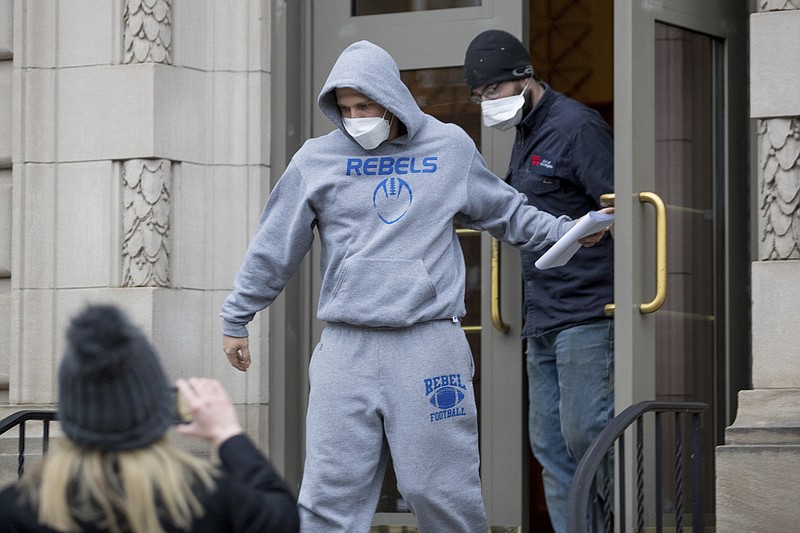 FILE - Derrick Evans exits the Sidney L. Christie U.S. Courthouse and Federal Building after being arraigned, Jan. 8, 2021, in Huntington, W.Va. The former West Virginia lawmaker who livestreamed himself on Facebook storming the U.S. Capitol and cheering on what he described as a “revolution” has been sentenced to three months in prison. (Sholten Singer/The Herald-Dispatch via AP)

A former West Virginia lawmaker who livestreamed himself on Facebook storming the U.S. Capitol and cheering on what he described as a "revolution" was sentenced Wednesday to three months in prison.

Derrick Evans, 37, who pleaded guilty to a felony civil disorder charge, told the judge that he regrets his actions every day and is a "good person who unfortunately was caught up in a moment."

The Republican from Prichard, West Virginia, was sworn in as a member of the state's House of Delegates just weeks before the Jan. 6, 2021, riot that halted the certification of President Joe Biden's victory and left more than 100 police officers injured. Evans was arrested two days after the riot and promptly resigned a month before the start of the legislative session, so he never served a day in the legislature.

Prosecutors had sought the three months behind bars, describing Evans as a leader in the riot who escalated the chaos at the Capitol by enthusiastically egging on the rioters around him.

U.S. District Judge Royce Lamberth told Evans that time behind bars was necessary to reflect the seriousness of Evans' actions and help prevent something like the riot from ever happening again.

"I don't want another riot [after] the next election. I don't want this to happen again, so I'm going to do what I can," the judge added.

In the days leading up to the riot, Evans told his 30,000 Facebook followers to "Fight For Trump" in the nation's capital, according to court documents. On the day of the riot, he skipped then- President Donald Trump's speech and went straight to the Capitol, where he used his cellphone to record the melee for more than an hour, prosecutors said.

In a since-deleted cellphone video that was widely shared online, Evans gleefully narrated the riot for his Facebook followers, cheered on the crowd and fist bumped rioters as he and the rest of the mob swarmed the Capitol and jammed inside.

After pushing inside the Capitol, he shouted: "We're in! Derrick Evans is in the Capitol!"

About 15 minutes after leaving the building, he texted a friend to ask if he should delete the video "so there's no evidence" of his actions, court records show.

"Even while he was filming the livestream he knew what was happening around him was not lawful," Assistant U.S. Attorney Kathryn Fifield told the judge, noting that at one point Evans speculated that Trump would "pardon anybody who gets arrested" for going in the Capitol.

Evans' attorney urged the judge for probation, noting that the former lawmaker didn't engage in any violence or destruction and was heard on the video urging others not to do so. Attorney Paul Taylor argued in court documents the video suggests "a certain naivete" and "lack of experience, wisdom or judgment rather than primarily criminal intent."

Evans, a former teacher and football coach, is among more than 300 people who have pleaded guilty in connection with the riot. Defendants have admitted to crimes ranging from misdemeanors to felony seditious conspiracy.

Sentences have ranged from probation for those who admitted to petty offenses to more than five years in prison for a man who attacked police officers working to hold back the angry mob.