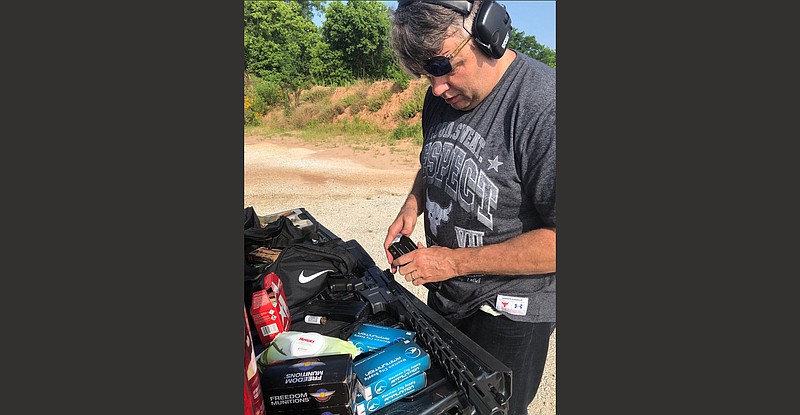 On Saturday, I joined Tre Kitchens for a short dash through the handgun and long gun disciplines at Twisted Barrel Precision, a new range near Sweet Home. It has handgun ranges and a rifle range that allows shots from 100 yards to one mile.

It was already very hot and humid at 8:45 a.m., when we arrived at the first pistol range. We brought an expansive arsenal, including my Smith & Wesson M&P 40 and a Smith & Wesson Performance Center Shield in 40 S&W. The latter is my personal carry firearm. It has a ported barrel and front and rear fiber optic sights. All of the slide edges are beveled, and the slide works easily. I also brought a Desert Eagle .45 ACP. It's a 1911 design that is overlooked and under-regarded, but it compares favorably to Colt, Kimber and Springfield Armory. Built in Israel, it's very well made, very reliable, very attractive and, most important, very accurate.

No it's not, but if it were lighter, it would be an outstanding turkey gun. At 8.27 pounds, it's suitable only for 3-gun competition, for which it is designed. It's a gas-operated model built on an AR-style frame, with an aluminum barrel shroud, flash hider and external, bottom-feed magazine. It also has a flip-up post sight and a rear ghost ring that assures positive target acquisition. Shooting it is joyous, and you can't help but laugh after racking off five quick rounds.

Kitchens also brought a Taurus revolver chambered for .44 Remington Magnum. I dreaded shooting it initially, but its ported barrel makes the recoil very manageable. The trigger is outstanding.

The Shield is designed for use in small spaces. However, I was very pleased to consistently hit steel plates 50 feet away. Our ammo was 180-grain hard ball ammo. That's extremely heavy for that caliber, and I expected it to be unmanageable in a pocket pistol. However, the ported barrel reduced the recoil to a pleasant level.

The Desert Eagle is delightful to shoot. I hit consistently at 50 feet as well, but I was very dismayed when it stove-piped a spent case so tightly that it took about five minutes to pry it free.

"This is why I don't like semiautos for self-defense," I said. "Revolvers don't jam."

At least, they don't unless you load your own ammo. During a high-volume loading session for my 41 magnum several years ago, I failed to put gunpowder in three cartridges. The primer detonation had just enough force to push the bullet partway into the barrel. The bottom portion was still in the cylinder, which locked the cylinder. Removing the bullet was quite a project. Doing it three times was maddening.

The highlight of that session was the shotgun. However, the heat truncated that session and drove us to the covered benches at the rifle range.

Our first stop was the 100-yard range, where we shot Kitchens' Marlin 336C in 35 Remington. After Kitchens fired 10 rounds, I had a go and printed a fairly decent group through iron sights. At least, Kitchens said I printed a decent group.

"Are you sure about that?" I asked.

"Did I not speak clearly?" Kitchens said. "You hit the target!"

"Because I watched them go through."

The next stop was the 600-yard range. My date for that dance was a Remington 700 BDL in 280 Rem. It wears a Nikon Buckmasters 3-9X40 scope with a rangefinding reticle. My first three shots found the range. The next three rang steel. They were handloads containing 140-grain Nosler Partitions powered by 59 grains of RL-19. For years I was loyal to H4831 for the 30-06 family of calibers, but for those cartridges on up through 7mm Magnum, I don't think you can beat R19 and R21.

The next player was a Winchester Model 70 Classic Featherweight in 7mm Mauser. The ammo was Prvi Partisan with 139-gr soft points. That experience was not satisfactory at all. This rifle and load is accurate at 145 yards. At 600 yards, they hit very short and extremely far to the right. It would have taken the entire box to walk them to the target to properly calibrate the scope.

As it was, I mentally calculated the discrepancy, aimed really, really high and really, really left. I managed to land a pair near enough to the target to claim a moral victory.

I spent a lot of time with that rifle last summer with a dozen handloads and never found a suitable match. It's going to take a lot more work.