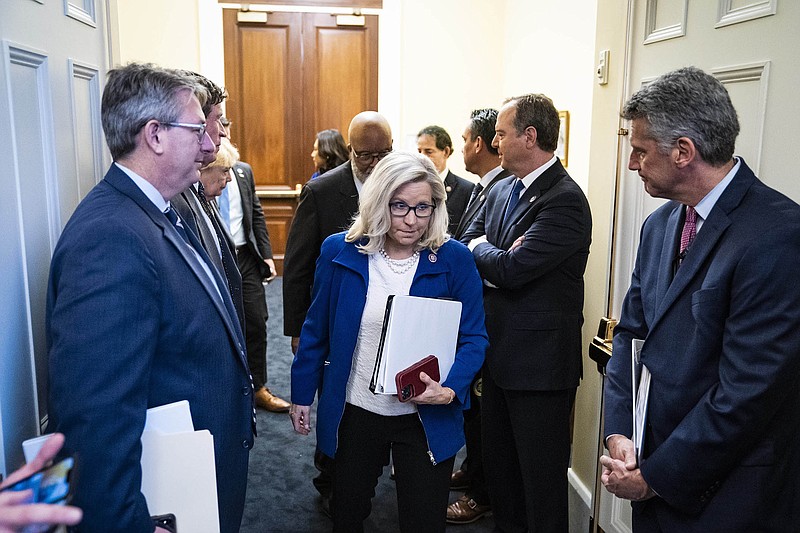 Liz Cheney, vice chair of the House select committee meets in a private room with Committee Chairman Bennie Thompson (background) and other members of the panel before Tuesday’s hearing. Thompson said Wednesday that the committee is receiving “a lot of information” for review. (The Washington Post/Jabin Botsford)

WASHINGTON - In the 24 hours since its last televised public hearing, there was an uptick in the number of violent threats against lawmakers on the House committee investigating the Jan. 6, 2021, insurrection at the U.S. Capitol, and all the members are likely to receive a security detail, according to three people involved with the investigation.

On Wednesday the committee also announced plans to continue its public hearings into July as the probe deepens.

The committee on Tuesday held its fourth hearing, which focused on efforts by former president Donald Trump and his allies to overturn the results of the 2020 election and the resulting political violence and harassment experienced by many of those who resisted.

Over the weekend, Rep. Adam Kinzinger, R-Ill., revealed a letter addressed to his wife that threatened to execute them and their 5-month-old baby. He warned that the political violence of Jan. 6, 2021 was not an aberration but a consequence of his party's repeated lies.

"There is violence in the future, I'm going to tell you," Kinzinger said on ABC's "This Week" program. "And until we get a grip on telling people the truth, we can't expect any differently."

Committee Vice Chairwoman Liz Cheney, R-Wyo., has been flanked with a security detail since last year, and has been unable to hold large, publicized campaign events, in part due to security concerns, according to aides.

During Trump's second impeachment trial, which was held shortly after the insurrection, security details were provided to all nine impeachment managers.

"For safety reasons, the USCP does not discuss potential security measures for Members," a spokesperson for the United States Capitol Police said in a statement.

Tuesday's hearing featured some of the most emotional testimony so far, including appearances from mother-and-daughter election workers in Georgia, Ruby Freeman and Wandrea ArShaye "Shaye" Moss, who described the consequences of being targeted by the former president and his allies.

"It's turned my life upside down," said Moss. "I don't want anyone knowing my name. I don't want to go anywhere with my mom because she might yell my name out over the grocery aisle or something. I don't go to the grocery store at all. I haven't been anywhere at all. ... I second-guess everything I do. It's affected my life in a major way -- in every way. All because of lies, for me doing my job, the same thing I've been doing forever."

The remaining hearings are likely to focus even more on the culture of political violence on the right. Reps. Jamie Raskin, D-Md., and Stephanie Murphy, D-Fla., are set to co-lead a hearing that explores the path to extremism that spurred insurrectionists to attack the Capitol on Jan. 6, 2021.

The House's Jan. 6 committee chairman, Rep. Bennie Thompson, told reporters Wednesday that the committee is receiving "a lot of information" -- including new documentary film footage of Trump's final months in office -- as its year-long inquiry intensifies with hearings into the attack on Jan. 6, 2021, and Donald Trump's efforts to overturn the 2020 election that Democrat Joe Biden won.

Thompson, D-Miss., said today's hearing, which is set to highlight former Justice Department officials testifying about Trump's proposals to reject the election results, would wrap up this month's work. The committee would start up again in July.

"We have a new documentary from a person that we're talking to, and we got to look through all his information," Thompson said, referring to the British filmmaker whose never-before-seen interviews with the former president and his inner circle were turned over to the committee this week. The footage was taken both before and after the insurrection.

For the past year, the committee has been investigating the violence at the Capitol and its causes, and has interviewed more than 1,000 witnesses and produced some 140,000 documents. Nine people died in the attack and its aftermath.

The committee had been scheduled to conclude this first round of public hearings in June. But additional information has come to the committee's attention, and Congress is set to recess for two weeks of remote and district work into the Fourth of July holiday.

The revelation about the film came to light Tuesday when British filmmaker Alex Holder revealed he had complied with a congressional subpoena to turn over all of the footage he shot in the final weeks of Trump's 2020 reelection campaign.

Rep. Jamie Raskin, D-Md., indicated on Tuesday that the investigation's schedule may be changing.

"I would just say the original hearings would have wrapped up in June, but we are picking up new evidence on a daily basis with enormous velocity," Raskin said. "And so we're constantly incorporating and including the new information that's coming out."

He added: "But certainly the hearings will conclude before the end of the summer."

The televised hearings launched with a primetime session this month, and lawmakers said they continue uncovering new tips and information.

Federal agents investigating the Jan. 6 attack on the U.S. Capitol on Wednesday dropped subpoenas on people in at least two states, in what appeared to be a widening probe of how political activists supporting President Donald Trump tried to use invalid electors to thwart Joe Biden's 2020 electoral victory.

Agents conducted court-authorized law enforcement activity Wednesday morning at two locations, FBI officials confirmed to The Washington Post. One was the home of Brad Carver, a Georgia lawyer who reportedly signed a document claiming to be a Trump elector. The other was the Virginia home of Thomas Lane, who worked on the Trump campaign's efforts in Arizona and New Mexico. The FBI officials did not identify the people associated with those addresses, but public records list each of the locations as the home addresses of the men.

Separately, at least some of the would-be Trump electors in Michigan also received subpoenas on Wednesday, according to a person who spoke on the condition of anonymity to discuss an ongoing investigation. But it was not immediately clear whether that activity was related to a federal probe or a state-level criminal inquiry.

Trump campaign documents show advisers knew the fake-elector plan was baseless. The precise nature of the information being sought by the Justice Department at the homes of Carver and Lane wasn't immediately clear.

Officials have previously said that the Justice Department and FBI were examining the issue of false electors, whom Trump and others hoped might be approved by state legislators in a last-ditch bid to keep Trump in the White House. Until now, however, those investigative efforts seemed to primarily involve talking to people in Republican circles who knew of the scheme and objected; the subpoenas issued Wednesday suggest the Justice Department is now moving to question at least some of those who allegedly agreed to pursue the effort.

FBI agents delivered a subpoena to Lane on Wednesday morning at his home in Virginia, according to the person who spoke on the condition of anonymity to discuss an ongoing investigation. After leaving the Trump campaign, Lane has worked for the Republican National Committee's election efforts in Virginia, this person said.

Phone messages left for Lane were not immediately returned. Carver, the Georgia lawyer, also did not immediately respond to messages seeking comment. Public records list an address for Lane in south Arlington, and an FBI spokeswoman confirmed agents conducted "court-authorized law enforcement activity" at that address on Wednesday morning.

The new investigative moves by the Justice Department come amid a series of high-profile congressional hearings examining not just the riot at the Capitol, but also Trump's efforts to undo Biden's electoral victory through fake electors, lobbying the Justice Department and false claims of massive voter fraud.

Arizona and Georgia officials testified Tuesday to the House select committee about the activities launched by Trump and his inner circle of advisers directed at those states.

Earlier this year, the Justice Department sent subpoenas and sought interviews with some of the 15 people around the country who were slated to be Trump electors if he had won their states but who were replaced by other Trump supporters on the day of the electoral college vote, according to The Washington Post.

Some of those Republicans have told the press they didn't participate as electors because Biden had won the popular vote in their state and they did not think the gatherings were appropriate; others said they declined to participate because they were ill or had scheduling conflicts.

Among those who refused to participate were Pennsylvania Republican Party Chairman Lawrence Tabas, an election-law expert who had defended Trump in 2016 against a recount push by Green Party candidate Jill Stein; former congressman Tom Marino (R-Pa.), one of the first members of Congress to endorse Trump's presidential campaign; and Georgia real estate investor John Isakson, son of the late Republican senator Johnny Isakson.

Those earlier subpoenas sought all documents since Oct. 1, 2020, related to the electoral college vote, as well as any election-related communications with roughly a dozen people in Trump's inner circle, including Rudy Giuliani, Bernard Kerik, Boris Epshteyn, Jenna Ellis and John Eastman.

One would-be Trump elector in Georgia, Patrick Gartland, had been appointed to the Cobb County Board of Elections and Registration and believed that post meant serving as an elector would have created a conflict of interest for him. Still, two FBI agents recently came to his home with a subpoena and asked whether he had any contact with Trump advisers around the time of the November election. "They wanted to know if I had talked to Giuliani," Gartland said.

The hearings on Capitol Hill have increased public pressure on the Justice Department to more aggressively investigate Trump and those close to him for their roles in the run-up to Jan. 6.

But senior Justice Department officials have also complained to the panel that prosecutors need access to the transcripts of more than 1,000 private committee interviews, and said that not having those transcripts jeopardizes the pending trial of five members of the Proud Boys extremist group accused of seditious conspiracy for their alleged role in the riot. The federal judge handling that case on Wednesday ordered another trial delay, from Aug. 8 until December.