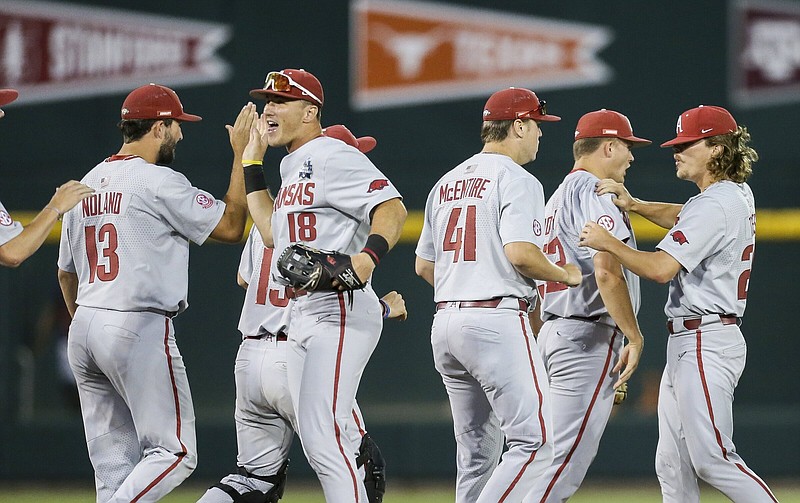 Arkansas players celebrate after the Razorbacks’ victory over Ole Miss on Wednesday night at the College World Series in Omaha, Neb. The teams meet again today with the winner advancing to the best-of-3 championship series against Oklahoma. More photos available at arkansasonline.com/623cws. (NWA Democrat-Gazette/Charlie Kaijo)

DeLucia is back on the mound for the final three outs.

Cayden Wallace grounded out to third.

Turner grounded out to first and the Razorbacks are one out away from being eliminated.

Lanzilli strikes out swinging and the game is over.

LHP Evan Taylor will take over on the mound for the Razorbacks.

Noland allowed 2 runs on 7 hits and struck out 7 batters. He did not issue a single walk in his gem of an outing.

Dylan DeLucia sits the Razorbacks down in order once again and his pitch count is now over 100.

Webb and Stovall grounded out to second.

Noland recorded another 1-2-3 inning. The Razorback offense will have to come up with some run support in the final two frames.

What looked like another quick inning for DeLucia has been extended more so by the Rebels' defense than the Razorbacks.

Turner grounded out. Lanzilli struck out.

Dunhurst couldn't squeeze the foul tip from Robert Moore on a 3-2 and Moore reached on an infield single on the next pitch. Jalen Battles reached after an error from Gonzalez.

Arkansas comes up empty after a groundout on the first pitch from Brady Slavens.

Three singles in the inning give Ole Miss an insurance run.

Tim Elko scored from second on a single by Kemp Alderman who was thrown out trying to advance to second.

It will be interesting to see how far Ole Miss rides DeLucia on short rest. He needed just five pitches to get through the sixth.

Gonzalez grounded into a 5-6-3 double play to end the inning. Noland has thrown 62 pitches through 6 innings.

DeLucia is mowing down the Razorbacks. He's retired 12 of the last 13 hitters.

He has allowed just one hit since the rocky first inning and has issued a walk. His pitch count is at 64.

The Rebels go down in order in the fifth.

Noland racked up two more punchouts and is up to five this afternoon.

After two quick outs, Lanzilli roped a first-pitch breaking ball into left field for a single. Moore was caught looking at a 3-2 offering from DeLucia for the final out.

The Arkansas dugout let its displeasure with the call be known. Dave Van Horn just told the ESPN reporter that it looked like Moore was rung up on ball four.

Ole Miss takes the lead after a pair of hits in the fourth.

Justin Bench laced a leadoff single and came around on a double by Kevin Graham with two outs.

This game has all the makings of a pitcher's duel. It remains scoreless after both team's first time through the lineup.

DeLucia has retired seven Razorbacks in a row.

The Rebels got their first baserunner after a one-out single by Hayden Dunhurst -- who snapped an 0-9 streak in Omaha.

Noland has still faced the minimum after getting TJ McCants to ground into a double play started and ended by Peyton Stovall at first.

Delucia sat the Razorbacks down in order.

Moore was robbed of extra bases by a leaping grab from Kevin Graham in left field. Jalen Battles flew out to shallow left. Brady Slavens struck out swinging at a high fastball to end the inning.

Three up, three down for the Rebels once again.

Arkansas second baseman Robert Moore showed exactly how he became the first ever Razorback to win a Gold Glove Award. He made a diving snag to his left, hopped to his feet and made a spinning throw to first for the second out.

The Razorbacks stranded a pair after Chris Lanzilli popped out to first base.

The Razorback ace is off to a hot start picking up a 1-2-3 opening frame. He induced a pair of groundouts and struck out Tim Elko on an ugly check swing.