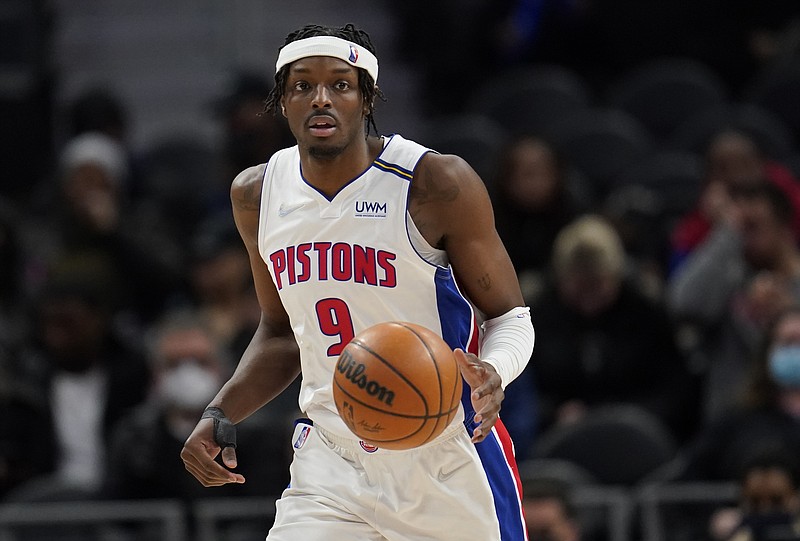 FILE - Detroit Pistons forward Jerami Grant brings the ball up against the Minnesota Timberwolves during the second half of an NBA basketball game in Detroit, Feb. 3, 2022. A person with knowledge of the move said the Pistons agreed Wednesday, June 22, to trade Grant to the Portland Trail Blazers. (AP Photo/Paul Sancya, File)

Jaylon Ferguson, who set an FBS record for career sacks while at Louisiana Tech and then played the past three seasons in the NFL with the Baltimore Ravens, has died. He was 26. Police said Wednesday the cause of death was still to be determined. "On June 21, 2022, at approximately 11:25 p.m., Northern District patrol officers responded to a home in the 400 block of Ilchester Avenue for a report of a questionable death," Baltimore police said. "Once there, officers located 26-year-old Jaylon Ferguson, unresponsive, being treated by medics. Ferguson never regained consciousness and was pronounced dead on the scene by medics. No signs of trauma was found or foul play suspected at this time." Ferguson, nicknamed "Sack Daddy," was drafted by the Ravens in the third round in 2019 and played his whole pro career with them. He appeared in 38 games and had 4 1/2 sacks.

Tony Siragusa, the charismatic defensive tackle who was part of one of the most celebrated defenses in NFL history with the Baltimore Ravens, died Wednesday. He was 55. Siragusa's broadcast agent, Jim Ornstein, confirmed the death. The cause of death was not immediately available. Siragusa, known as "Goose," played seven seasons with the Indianapolis Colts and five with the Ravens. Baltimore's 2000 team won the Super Bowl behind a stout defense that included Siragusa, Ray Lewis and Sam Adams. Siragusa was popular with fans because of his fun-loving attitude, which also helped him transition quickly to broadcasting after his playing career. Siragusa came to Baltimore as a free agent in 1997 and teamed up with Adams to form an imposing defensive tackle tandem. He finished his career with 22 sacks.

A person with knowledge of the situation said the Detroit Pistons have agreed to trade Olympic gold medalist Jerami Grant to the Portland Trail Blazers, with the biggest part of the return being a first-round pick in 2025. Detroit gets the No. 36 pick in the draft today and what would have been Milwaukee's first-round pick in 2025, according to the person who spoke to The Associated Press on condition of anonymity because neither team had announced the agreement publicly. Grant's salary -- nearly $21 million for next season -- is virtually the exact amount as the trade exception that Portland created in February when it traded C.J. McCollum to New Orleans. It also gives Portland a big boost after a disappointing season, one where perennial All-Star Damian Lillard missed much of the year while injured. He and Grant were teammates on the U.S. Olympic team that won gold at the Tokyo Games last summer.

Players who have joined the new Saudi Arabia-funded league will still be allowed to compete at the British Open next month, organizers said on Wednesday. The U.S. Open had allowed players who were banned by the PGA Tour for signing up to the LIV Golf series to play at last week's tournament. The world's oldest major championship begins July 14. Phil Mickelson and Dustin Johnson headlined LIV Golf's inaugural tournament held this month outside London and won by former Masters champion Charl Schwartzel, who collected $4.75 million. The league is bankrolled by Saudi Arabia's Public Investment Fund.

O. Bruton Smith, who emerged from North Carolina farm country and parlayed his love of motorsports into a Hall of Fame career as one of the biggest track owners and most successful promoters in the history of auto racing, died Wednesday. He was 95. His death was announced by Speedway Motorsports, which cited natural causes. His son, Marcus, the current president and CEO, on Tuesday posted a tribute to his father on social media: "I had a wonderful Father's Day weekend. I am so thankful to be a dad, and to have an amazing dad," said the post, which was accompanied by photos of Smith surrounded by his family. Born March 2, 1927, on a farm in Oakboro, a small town 30 miles east of Charlotte, Ollen Bruton Smith was the youngest of nine children. He watched his first race as an 8-year-old during the Depression and bought his first race car at 17 for $700. "The whole idea at that time was that I was going to be a race car driver. I learned to drive, but that career didn't last long," Smith said about his early start, claiming his mother prayed for him to find another passion. "You can't fight your mom and God, so I stopped driving." Smith instead became an entrepreneur -- promoting his first race at age 18 -- and became one of the giants in stock car racing. Speedway Motorsports, the company he founded, was the first motorsports company to trade on the New York Stock Exchange and it currently owns 11 facilities across the United States.

Canadian teenager Summer McIntosh won the women's 200-meter butterfly for her first title at the world swimming championships on Wednesday before 17-year-old Romanian David Popovici claimed his second. They still have some way to go to match Katie Ledecky, who claimed her 18th gold at a worlds by helping the United States win the women's 4x200-meter freestyle relay. The 25-year-old Ledecky now has 21 medals, extending her record for the most among female swimmers in the competition. Popovici won the men's 100 freestyle to add to the 200 freestyle he won on Monday. He is just the second man to achieve the double at a worlds, after American swimmer Jim Montgomery in 1973, and he's the first Romanian swimmer to win two golds at a worlds. The 15-year-old McIntosh clocked 2 minutes, 05.20 seconds in the 200 butterfly to beat three Olympic medalists to the title.

FOX network analyst Tony Siragusa is seen before the start of an NFL football game between the St. Louis Rams and the Dallas Cowboys Sunday, Sept. 21, 2014, in St. Louis. (AP Photo/Tom Gannam) 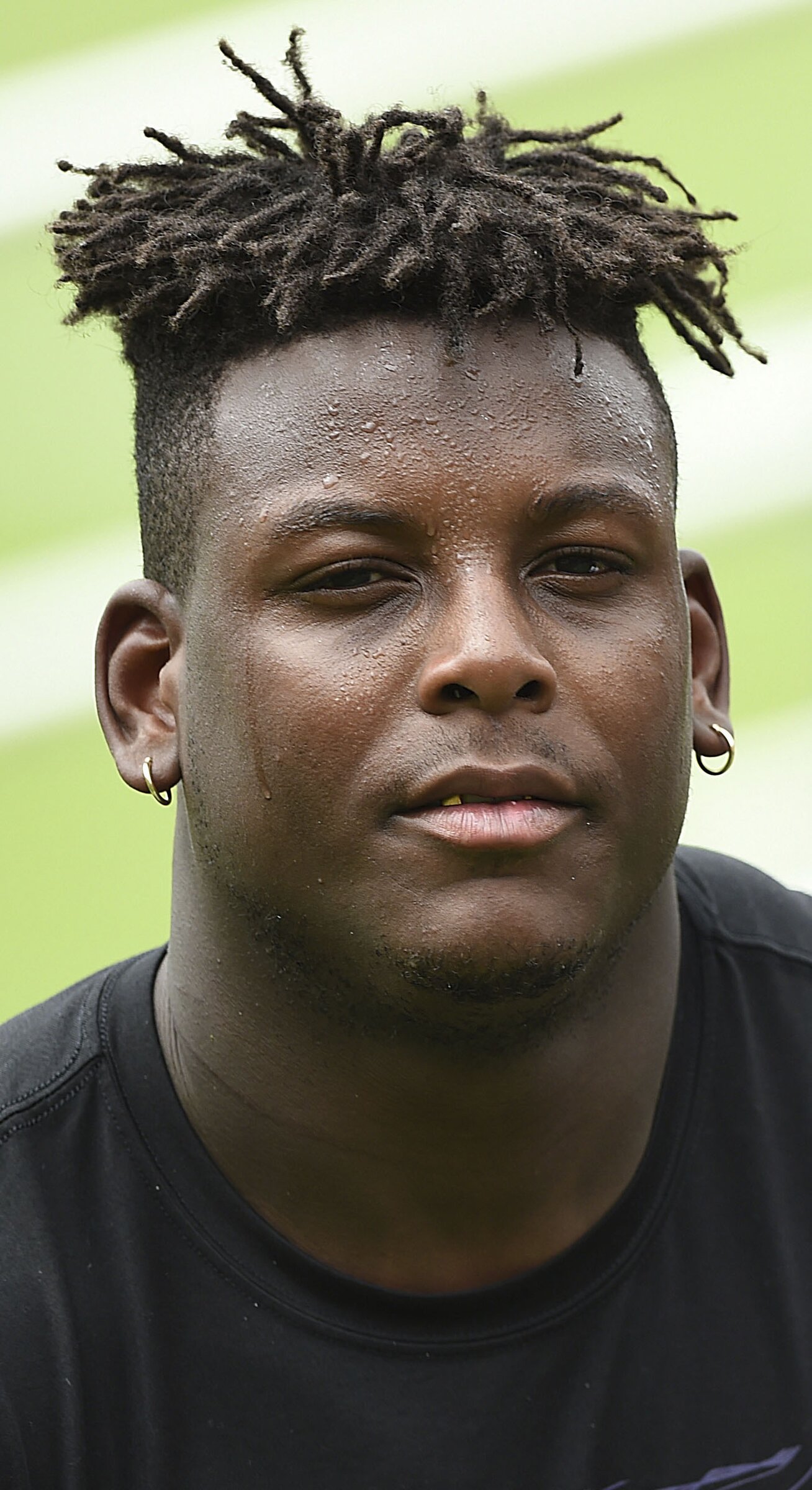