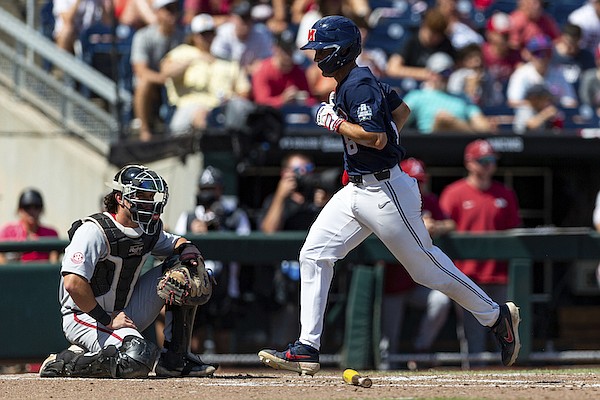 OMAHA, Neb. — Arkansas’ baseball season came to an end Thursday one game short of playing for a national championship.

The Razorbacks lost 2-0 to Ole Miss in a quick, well-pitched game at the College World Series. The game lasted 2 hours, 6 minutes.

Ole Miss (40-23) advanced to the national championship series against Oklahoma that is scheduled to begin Saturday at Schwab Field.

The Rebels improved to 8-1 during an unforeseen postseason run. Ole Miss was one of the last four teams admitted to this year’s tournament.

"One of the challenges we talked about is to not just come here, but to win," Ole Miss coach Mike Bianco said. "This isn't a bowl (game) where years from now people know if you went to a bowl, but they don't know if you won or lost. You went to the Gator Bowl, the Sugar Bowl, whatever.

"This is a tournament where it's like basketball, you're supposed to win and move on. I'm just proud that they continued to believe in one another. They've played well."

The Rebels won two of three games against the Razorbacks this week in Omaha, including a pivotal 13-5 outcome Monday that sent Arkansas to the losers bracket and forced the Razorbacks to play one more game than the Rebels in pool play.

Pitching on short rest, right handers Dylan DeLucia of Ole Miss and Connor Noland of Arkansas dueled for eight innings Thursday in the best-pitched game of the College World Series.

Noland allowed 2 runs and 7 hits in an 8-inning, 84-pitch start. He gave way to Evan Taylor in the ninth inning and Taylor retired all three batters he faced.

Neither team walked a batter.

"Both Connor and, I thought, Dylan pitched today like Friday Night aces in the Southeastern Conference," Bianco said, "and were terrific and really kind of matching each other pitch for pitch."

The teams cruised through the first 6 1/2 innings. The seventh-inning stretch began 1 hour, 27 minutes after the first pitch was thrown by Noland at 3:08 p.m.

Both teams were aggressive early in counts, but Arkansas coach Dave Van Horn said they had to be because of how well the pitchers were throwing to the strike zone.

Ole Miss twice had leadoff singles against Noland and turned those into their only runs. Justin Bench scored on a two-out double by Kevin Graham in the fourth inning to give the Rebels a 1-0 lead, and Ole Miss extended the lead to 2-0 when Calvin Harris’ single plated Tim Elko in the seventh.

"We got a couple of huge hits by Kevin and Calvin Harris, the timely hit that we talk about so much," Bianco said. "But the story of the day was Dylan. It was just a legendary performance."

Arkansas’ run-scoring opportunities came up empty after two-out rallies in the first and seventh innings. Lanzilli fouled out after two-out singles by Cayden Wallace and Michael Turner in the first, and Brady Slavens grounded out in the seventh when Robert Moore singled and Jalen Battles reached on a two-out fielding error by Ole Miss shortstop Jacob Gonzalez.

Moore was called out on strikes by home plate umpire Kevin Sweeney to end the fourth inning after Lanzilli reached with a two-out single. The strike drew the ire of Arkansas coach Dave Van Horn, who signaled to Sweeney that the 3-2 pitch was high in the strike zone.

"We felt like from the side it was definitely high," Van Horn said. "It was a slider that went side to side and I think it might have fooled the umpire a little bit, but I thought (Sweeney) did a good job. He was a strike caller. The pitchers were throwing strikes, but we felt like that pitch was up."

Lanzilli’s fourth-inning single accounted for Arkansas’ only base runner between the second and sixth innings. DeLucia retired 18 of 19 during one stretch.

The Razorbacks never had a leadoff hitter reach base.

"It's hard to score against good pitching when the leadoff man doesn't get on here and there," Van Horn said.

Arkansas leaves Omaha without a national championship for the 11th time in program history, including the seventh time under Van Horn, whose nine appearances at the College World Series — including two at Nebraska — are the most among active coaches.

The Razorbacks saw their season come to an end in the national semifinal round for the third time since 2009. Arkansas also lost to Oregon State in the championship series here in 2018.

"I'm disappointed that we lost, but so proud of my team," Van Horn said. "I'm just proud of the way they fought for really the last four or five weeks to get back to where we knew we should be, and that's here in Omaha.