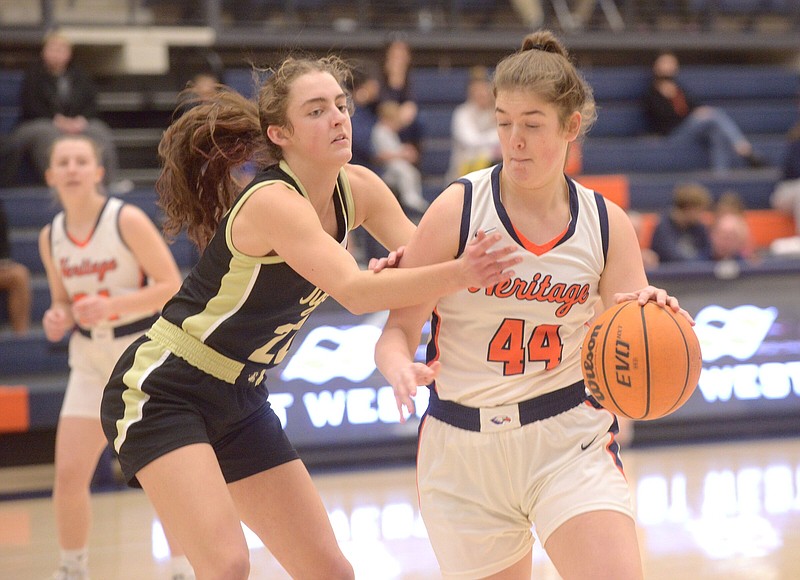 Rogers Heritage’s Easton Kimball (right), here being pressured by Bentonville’s Sam Rhuda during a January game, said she was surprised to be selected to play in the Arkansas High School Coaches Association’s All-Star basketball game. The game is set for 1 p.m. Saturday at the University of Central Arkansas’ Farris Center. (NWA Democrat-Gazette/J.T. Wampler)

ROGERS -- There was a good reason why Easton Kimball was shocked when she found out she had been selected to play in the Arkansas High School Coaches Association's All-Star basketball game this year.

"I really didn't even know there was an All-Star game until I heard that I was in it," Kimball said. "I was really shocked, and I started getting really nervous because it comes a few months after I got out of basketball practice. So I am going to have to really prepare, and it's going to take a little bit of work."

"It's pretty exciting. I'm so honored to even play in the game. I never thought this would happen."

Kimball's selection is significant for one reason. She becomes the first Rogers Heritage girls basketball player in the school's 14-year history to be chosen for the All-Star game, which takes place Saturday at the University of Central Arkansas' Farris Center.

The 6-foot Kimball earned all-state honors this season as she averaged 12.7 points, 9.1 rebounds and 2.1 assists per game and helped Heritage achieve one of its best seasons in school history. The Lady War Eagles finished with an 18-10 record overall and a 9-5 mark in 6A-West C0nference play, good enough for third in the league standings.

"Easton being chosen as an all-star was an easy selection for the coaches with her body of work," Heritage coach Josh Laymon said. "She averaged a double-double during conference play, and that's a special task in itself.

"Knowing the character that Easton has, if somebody was wanting to select somebody that would represent Arkansas well, I couldn't think of a better person than Easton."

Some players use the All-Star game as a precursor to what they should expect when they go to the college ranks, and Easton is no exception. She signed a national letter of intent to play at Judson University, an NAIA school located in Elgin, Ill.

"For college, I think the position that I will be playing might be a little different, or my role in the game could be different. I'll be working on that during the all-star game, like being more focused outside of the paint and driving to the basket rather than solely based on post moves."

Kimball and the remainder of the All-Stars will report Friday to UCA, then the two teams will have a pair of practices before Saturday afternoon's game. It will mean a quick adjustment for many of the players, but Laymon is confident Kimball will catch on quickly.

"She'll work out well for the West because she can score and not just be a black hole in the post," Laymon said. "She'll be playing with some talented players, and she'll find them if they are open.

"I'm sure a lot of these players will enjoy playing with Easton. She's the type of player that will make them look good, and she's incredibly smart. With just two practices, the coaches will be quickly installing an offense and defense, and Easton should have no problem with the flow of the coaching staff."