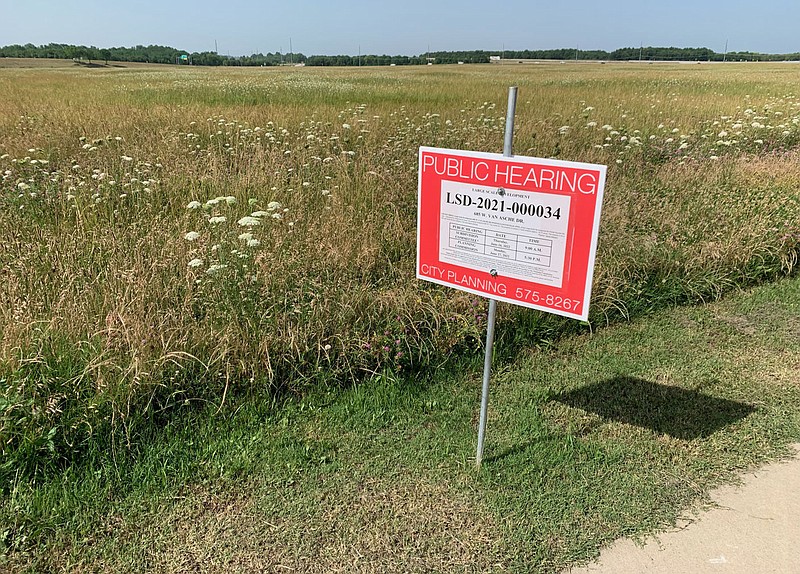 A sign stands Friday near the intersection of Van Asche Drive and Gregg Avenue in Fayetteville. Developer Keith Richardson of North Little Rock is proposing to build a five-story, 422-unit apartment complex with courtyards and a pool as part of a six-phase larger development on nearly 39 acres southwest of Van Asche Drive and Gregg Avenue. Visit nwaonline.com/220619Daily/ for today’s photo gallery. (NWA Democrat-Gazette/Andy Shupe)

FAYETTEVILLE -- A five-story, 422-unit apartment complex would serve as the first major project on empty land that opened for development after the city completed an extension of Van Asche Drive to Arkansas 112 nearly seven years ago.

The Subdivision Committee of the Planning Commission on Thursday reviewed a development plan for the apartment complex called Pointe Fayetteville planned on nearly 38 acres southwest of Van Asche Drive and Gregg Avenue.

The full commission will review the plan at a later date.

The complex would sit back from the intersection, leaving room for future development. The project marks the first phase of a planned six-phase development, according to a letter to city planners from Bryan Moore of DBA Architects in Fayetteville. The entire site planned for development comprises about 389 acres.

The proposed structure would be a five-story, wood-framed "wrap" concealing a parking garage in the center that could accommodate 704 cars, the letter says. The building would also house a club, fitness and leasing facility.

Tenants would have access to a swimming pool, courtyards and a roof garden, according to the letter. Valet trash service would be available.

The owner and developer behind the project is Keith Richardson of North Little Rock. The land's ownership is listed under Richardson's Riverpointe Development, LLC, on Washington County property records.

The city finished extending Van Asche Drive west to Arkansas 112 in September 2015 using money from a transportation bond issue voters approved in 2006. The project created a widened section of Van Asche with two car lanes in each direction heading east and west and a 5-foot-wide sidewalk on the north and south sides of the road and 10-foot-wide trail on the south side.

The Van Asche extension served as a leg of an arterial loop known as the "Mayor's Box" around the central part of the city.

The loop goes from where Rupple Road becomes Howard Nickell Road in the northwest part of town, then curves east and becomes Arkansas 112 before transitioning to Van Asche Drive.

The rest of the loop takes a short route north along Steele Boulevard and follows Joyce Boulevard east, turning south down Crossover Road and heading back west through Happy Hollow Road and 15th Street. It takes a slight route north on Razorback Road to get to Martin Luther King Jr. Boulevard and resumes west until hitting Rupple Road.

The final link of the Mayor's Box was completed on Rupple Road in 2020.

The Pointe Fayetteville project would extend Roosevelt Avenue from the north and Shiloh Drive from the east with roundabouts to lead traffic into and out of the complex. City planning staff talked about the width of the proposed streets during Thursday's meeting.

Blake Jorgensen with Jorgensen and Associates, serving as engineer on the project, said the developers anticipate about 17,000 daily car trips in and out of the site once the rest of the acreage is built out. Jorgensen proposed wider street extensions than city staff suggested to handle the flow of traffic.

City planners asked for more details about the full scope of the project.

The city is in the middle of designing a railroad crossing at Gregg Avenue and Shiloh Drive to accommodate development. The plan for the apartment complex incorporates that crossing into its design.

The project is separate from another nearby planned development. Plans are under way to turn the former Drake Farms site, made up of about 175 acres south of the Fulbright Expressway, into a mixed-use development project. Washington Regional Medical Center bought 15 of the acres for a planned expansion west of its campus.